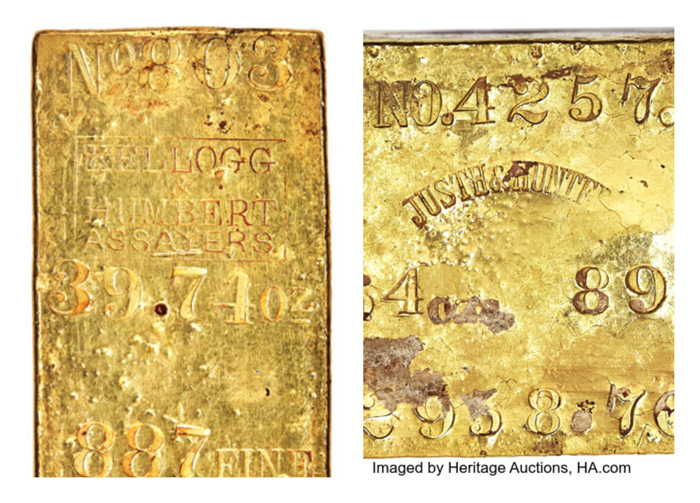 Gold stackers and shipwreck collectors, rejoice! Heritage Auctions will be selling two great pieces of shipwreck history as part of the July US Coin Auction #1332.


Gold stackers and shipwreck collectors, rejoice! Heritage Auctions will be selling two great pieces of shipwreck history as part of the July US Coin Auction #1332. The S.S. Central America shipwreck occurred in the 1850s and forever changed numismatic history. This 280-foot sidewheel ship regularly operated between Central American and the eastern coast of the United States in the 1850s until a hurricane in 1857 sunk the mighty boat, weighed down heavily with a huge treasure of gold coins and bars.

Rather than these pieces arriving to their destination and being used in commerce, they sat for years at the bottom of the ocean--primarily in uncirculated condition but covered in corrosive seawater. Thanks to careful expeditions of divers with new technology and gentle conservation, these coins and bars were eventually recovered and made available to the collecting public. Many of the coins and bars are actually in amazing condition today, after conservation, because they were never spent and used in commerce.

Pieces that were rescued from the S.S. Central America are very popular with collectors today. Some of the most impressive items of all from this shipwreck were the massive gold bars that survived their watery journey in surprisingly excellent condition. These bars are also appealing due to their connection to the California Gold Rush. After the "49ers" first discovered gold, the West needed to turn all of this yellow metal into a more practical method of trade, either coins or bars. Bars such as this piece were stamped with their weight and value as a medium of trade.

The lots up for bid in the July auction is a hefty 39.74 ounce gold bar created by Kellogg & Humbert Assayers and also an enormous Justh & Hunter Gold Ingot weighing 160.64 Ounces. These are both six-figure lots and are truly impressive in person, especially the Justh and Hunter bar, which MELTS for around $300,000 at current prices before you figure in its collector value!