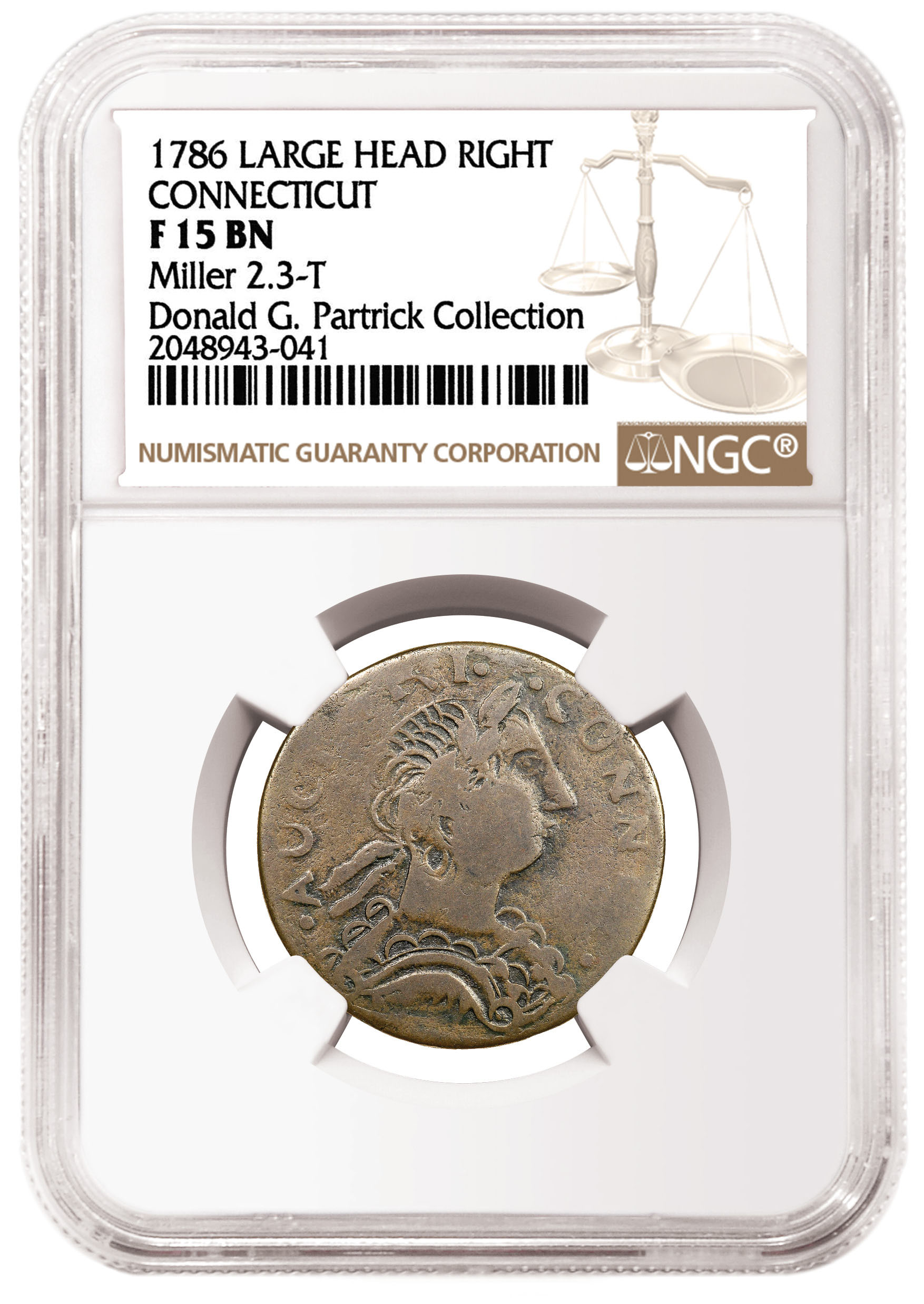 Stunning NGC-certified Connecticut Coppers from the Partrick Collection Being Sold

More than 500 Connecticut Coppers certified by Numismatic Guaranty Corporation® (NGC®) from the Donald G. Partrick Collection are being offered for sale, representing an outstanding opportunity for collectors of post-Colonial US coinage. 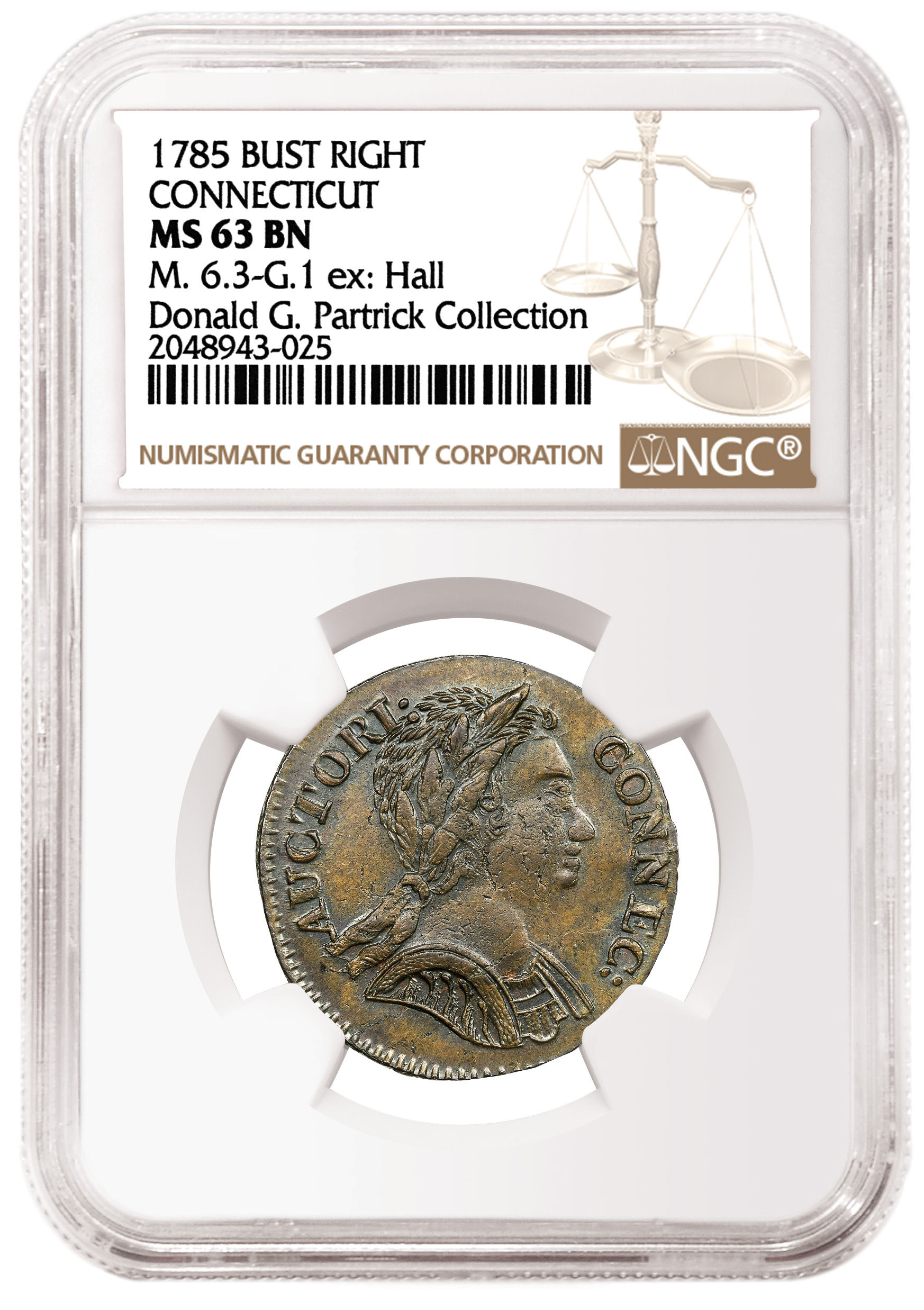 SARASOTA, Fla. (October 7, 2020) — More than 500 Connecticut Coppers certified by Numismatic Guaranty Corporation® (NGC®) from the Donald G. Partrick Collection are being offered for sale, representing an outstanding opportunity for collectors of post-Colonial US coinage. Bidding is now under way in a Heritage Auctions sale containing nearly all of them, with the auction scheduled to conclude on November 1, 2020.

One phenomenal example is being held for a Platinum Sale in January: a 1787 Figure Right Connecticut Copper graded NGC VF 20 BN. It is pedigreed to the Norweb Collection and attributed by its catalog number: Miller 1.4-WW. The reverse die is unique because it shows the figure facing to the right. The only other known example, pedigreed to the Newman Collection and graded NGC F 12, realized $164,500 at a Heritage sale in May 2014.

Connecticut Coppers (called “coppers” because they are not denominated) were struck from 1785 to 1789 under contract from the State of Connecticut. They were modeled on the British halfpence then in circulation, but say “AUCTORI CONNEC” (Latin for “Authority of Connecticut”) on the obverse and “INDE ET LIB” (Latin for “Independence and Liberty”) on the reverse.

Dozens of different dies were used to strike these coins, which results in a number of interesting styles. Henry Miller first attempted to catalog all of the varieties in 1920, and today Connecticut Coppers are attributed by “Miller” numbers.

The November sale features an exceptionally rare 1786 Large Head Right Connecticut Copper (Miller 2.3-T) graded NGC F 15 BN . It was once part of Miller’s own collection as well as those of Ford and Betts.

Altogether, the offerings include a remarkable 307 varieties out of the approximately 360 varieties known. This represents an incredible feat given that many varieties are extremely rare or unique. Also, the relatively crude manufacture of these coins coupled with the extensive circulation that they enjoyed makes collecting by Miller variety an extremely challenging endeavor.

To assemble his collection, Partrick acquired examples from many notable collectors over a period of several decades. Pedigrees to Garrett, Norweb, Ford, Boyd, Hanson, Oechsner, Taylor, Hall and others are encountered with regularity in the Partrick Collection.

“Donald G. Partrick’s collection of Connecticut Coppers shows his extraordinary dedication and passion. The assemblage of such a phenomenal set — one with so many fantastic rarities — requires a lifetime of intense focus,” commented Mark Salzberg. “We are delighted that NGC was chosen to certify selections from the Donald G. Partrick Collection.”

“NGC is well-known for its expertise with US coins, especially ones from this particularly challenging era,” said Jim Halperin, Co-Chairman of Heritage Auctions. “The complexity of this collection made NGC the obvious choice for authentication and attribution.”

The first part of the Partrick Collection, which is entirely graded by NGC, sold for nearly $26 million at Heritage Auctions’ January 2015 FUN Show sale. More rarities, including a pair of Brasher Doubloons, are expected to add millions more to that total as the remainder of the Partrick Collection is sold over the next few months. The Connecticut Coppers sale is the first from this new group. See the entire schedule at HA.com/Partrick

NGC has added the Partrick Connecticut Coppers to its online image gallery of the collection. To view the gallery, visit NGCcoin.com/Partrick .

Other highlights in the November sale include:

NGC is the world’s largest and most trusted third-party grading service for coins, tokens and medals, with more than 47 million collectibles certified. Founded in 1987, NGC provides an accurate, consistent and impartial assessment of authenticity and grade. Every coin that NGC certifies is backed by the comprehensive NGC Guarantee of authenticity and grade, which gives buyers greater confidence. This results in higher prices realized and greater liquidity for NGC-certified coins. To learn more, visit NGCcoin.com

© 2020 Numismatic Guaranty Corporation of America. All rights reserved . NGC, NCS, PMG, CGC, CCS, ASG, CAG and CCG are the registered trademarks or unregistered trademarks of Numismatic Guaranty Corporation of America, and/or its related companies in the United States and/or other countries. All other names and marks referenced in this release are the trade names, trademarks, or service marks of their respective owners.