The international coin trade is booming thanks to Covid. This affects the prices of coins of the German Empire, too. In Heidelberger Münzhandlung’s auction, pieces of outstanding quality achieved results that had previously been unheard of: 25,500 euros for 1 mark 1879 A and 17,750 euros for 5 marks “Eichbaum” 1930 E. 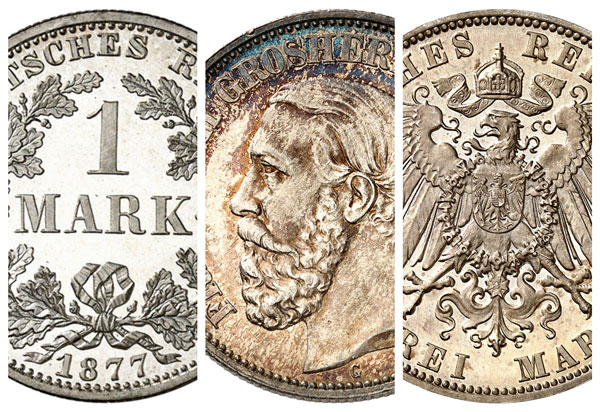 Anyone familiar with American and German coins knows that German coins of the 19th and 20th centuries are still highly undervalued compared to US coinage.

Anyone familiar with American and German coins knows that German coins of the 19th and 20th centuries are still highly undervalued compared to US coinage.

The international coin trade is booming thanks to Covid. This affects the prices of coins of the German Empire, too. In Heidelberger Münzhandlung’s auction, pieces of outstanding quality achieved results that had previously been unheard of: 25,500 euros for 1 mark 1879 A and 17,750 euros for 5 marks “Eichbaum” 1930 E.

Anyone familiar with American and German coins knows that German coins of the 19th and 20th centuries are still highly undervalued compared to US coinage. The reason for this phenomenon is that the market for German coins has traditionally been dominated by collectors. Although collectors may have a generous budget, their funds tend to be limited. A clear indication for the fact that the German one is a collector market is that the most important price catalogue for these coins – the “Jaeger” – does not give appraisals for top quality rarities but simply states that they are sold for collector prices (= LP, Liebhaberpreis).

The US market, on the other hand, is dominated by investors, especially regarding the upper price segment. Only a few collectors can afford the six- and seven-figure bids that are necessary to acquire a rarity of outstanding quality. The most important US price catalogues are structured in a completely different way than those published in Europe. They divide the category “mint state” into as many as five subgroups and give an appraisal for each of them.

However, in recent years the two markets have begun to influence each other. This was also evident during the last two auction sales of Heidelberger Münzhandlung from 10 to 12 May 2021. Due to Covid, they were held exclusively as an online event – for the second time ever in the history of Heidelberger Münzhandlung. This made live bidding from one’s computer at home possible. That is why the international market participated much more in the auction than ever before.

This resulted in prices that were previously unheard of regarding coins of the German Empire. And the trend is upward, as – considering how rare they are – some coin types might even achieve higher results in the future. 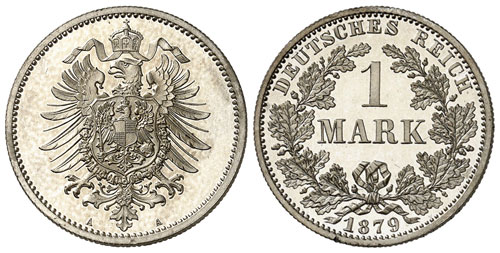 Circulation Money of the German Empire

A typical example for this is a simple 1 mark piece sold for 25,500 euros. The background: this type was issued in Berlin in 1879 at a mintage of just 156,444 specimens. 25,500 euros is probably the highest result a 1 mark piece of the German Empire ever achieved.

If you think that this is breath-taking, you should remember that Morgan Dollars of similar quality – for example the 1893 O piece for New Orleans of which 300,000 pieces were minted, i.e. almost twice as many – realized between $200,000 and $300,000 even prior to Covid. Considering this, you can understand why a far-sighted collector-investor wanted to get their hands on a piece that is unique in this quality despite the high price.

Let us compare this price to the result realized by a 1 mark piece of the Berlin Mint created in 1877. 6,000 euros were paid for the coin, of which 697,362 specimens exist. This is all the more remarkable as the previous record for the coin type of that year was 5,750 euros – and this price was not paid for the common type, which was on offer at Grün, but for the much rarer coin type from Hanover of which only 48,164 pieces exist. This illustrates how profoundly Covid and the worldwide demand has caused a rise in price of coins of the German Empire. 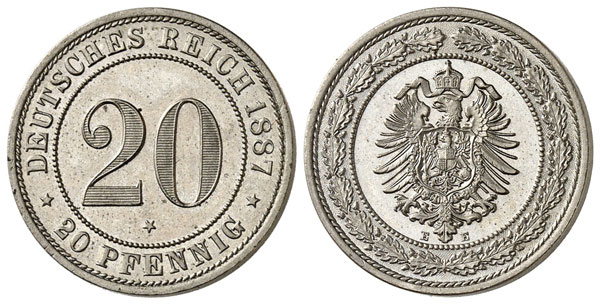 The Most Expensive 20 Pfennig Piece

The price achieved by one of 50 first strikes from the Muldenhütten Mint was no surprise. The coin changed hands at 10,250 euros and is thus probably the most expensive 20 pfennig piece of the German Empire. In 2018, a similar piece of the same quality sold for 8,000 euros. And yet, even here we should take a minute and think about the price such a rare coin might have realized, had investors from China and the US the same interest in German coins as in US coins. 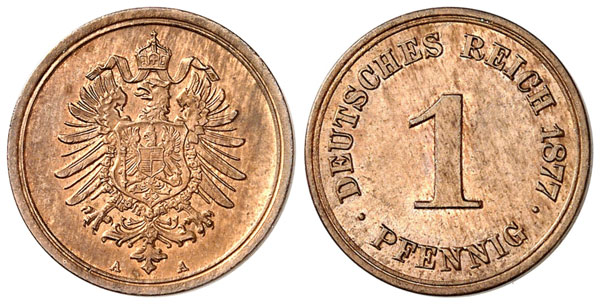 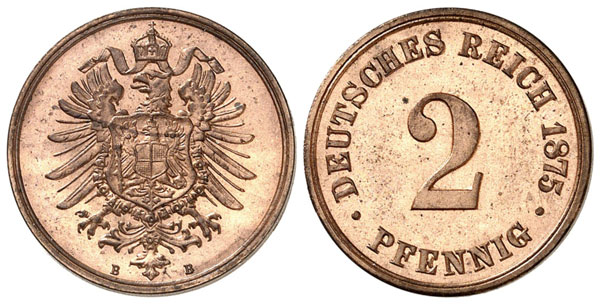 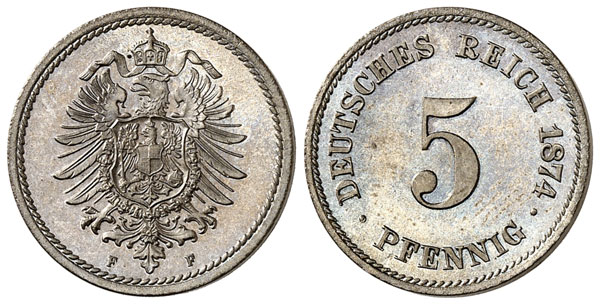 Investments for a Small Budget

Any dedicated average collector should still be able to afford these three pieces of extraordinary quality, even if the hammer price – as in the case of the 2 pfennig piece – is more than twelve times the price mentioned in the Jaeger catalogue. 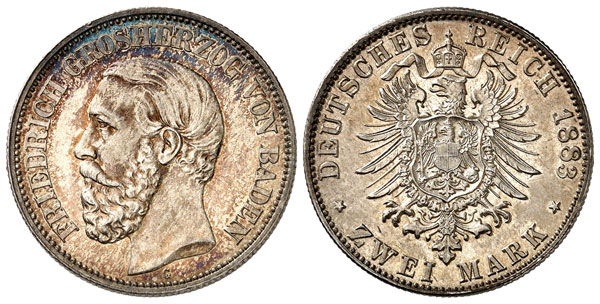 Things are quite different as soon as the portrait of a prince is featured on a coin of the German Empire. Let us move on to the section of 2 mark pieces including many rarities.

One of them is the 1883 Baden 2 mark piece from Karlsruhe, Herbert Grün was able to offer a FDC specimen of this coin type. It has a mintage of 45,493 pieces and achieved the impressive price of 23,500 euros – and yet, this coin is far from being the most expensive 2 mark piece of the German Empire used as circulation money. 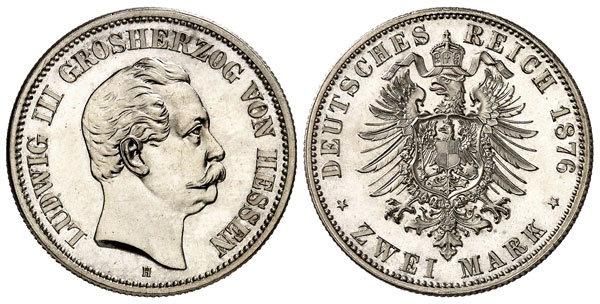 A new record was set by a coin offered by Heidelberger Münzhandlung in auction 81. The 1876 Hesse 2 mark piece has a much higher mintage number than the previous lot – 202,108 specimens – however, Grün was able to offer a Proof specimen of this coin. It was sold for 43,500 euros, which is more than three times the price listed in the Jaeger catalogue and by far the highest price that can be found in Coin Archive for a 2 mark piece. 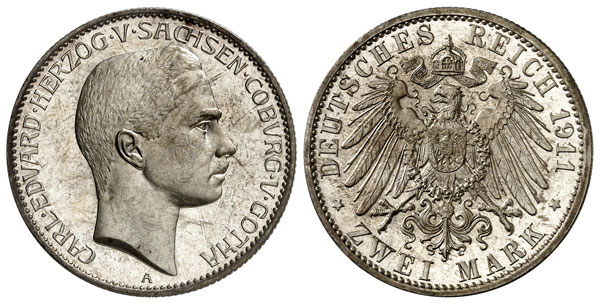 In contrast, the 2 mark piece of 1911 minted in Saxe-Coburg-Gotha was a real bargain. With a mintage of only 100 pieces, it is one of the true rarities of the German Empire. However, the photo clearly showed that the rare coin was damaged by many small scratches, which resulted in a rather low price compared to the two previous pieces. 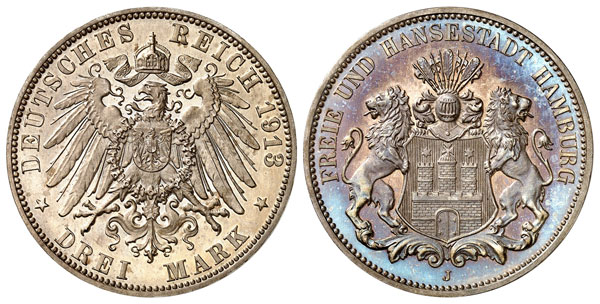 343,900 specimens of the 1913 Hamburg 3 marks piece were minted. And – as Jaeger knows – there are quite a lot of Proof coins among them. That is why the Jaeger catalogue appraises them at only 220 to 250 euros. But those days are gone. At Grün, such a piece was already estimated at 400 euros, and many bidders would have loved to purchase the coin for that money. However, the coin sold for 1,950 euros. This might be an indication for the fact that, indeed, prices for coins of the German Empire have changed completely. 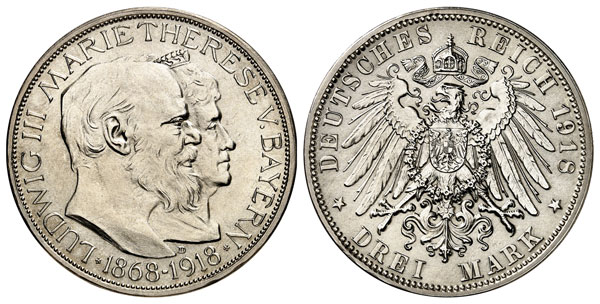 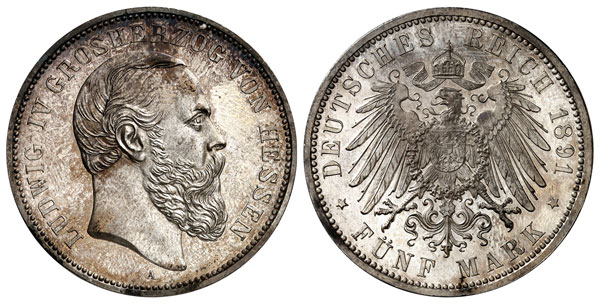 Bavarian Wedding and Other 5 Marks Pieces 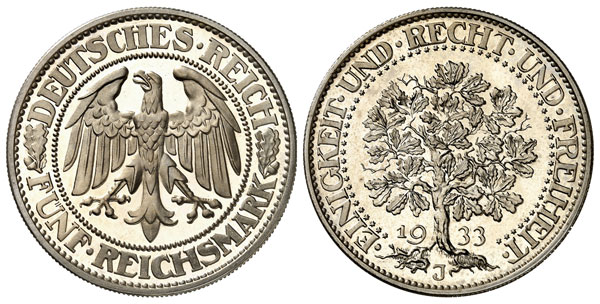 The Most Expensive Oak Tree

A whole series including 37 lots with the 5 reichsmark coin “Oak Tree” (Eichbaum) was offered at Heidelberger Münzhandlung’s auction 82. The quality of the pieces ranged from almost extremely fine to Proof. While even FDC specimens could still be bought for prices up to 500 euros, Proof pieces achieved much higher prices. And quality is more important than rarity.

Oak Tree coins minted in 1930 are especially popular, and Grün was able to offer specimens for all six mint marks. Among these coins, there are two particularly rare issues: those from Muldenhütten featuring “E” and from Karlsruhe featuring “G”. The Karlsruhe piece was almost FDC and sold for 3,100 euros, the Muldenhütten Proof coin for 7,200 euros. For comparison: the Hamburg Oak Tree – “J” – is almost twice as common as the two other varieties. And yet, a Hamburg Proof piece was sold for 6,500 euros, i.e. for almost twice the price of the rare Karlsruhe specimen and for just a little bit less than the rare piece from Muldenhütten. As I said: quality is more important than rarity.

By the way, coins minted in 1933 are even rarer than all other varieties, and such a piece achieved more than twice as much. The Proof specimen sold for 17,750 euros, which, according to Coin Archive, makes it the most expensive circulation coin 5 reichsmarks Oak Tree ever sold.

These are just a few of many remarkable prices achieved in auction 81 and auction 82 by Heidelberger Münzhandlung. We encourage you to take a close look at them if you are interested in coins of the German Empire. Consigning pieces can be worth it right now – especially if you paid attention to quality while building your collection.

And for all those who were not able to get their hands on a piece: Heidelberger Münzhandlung is already preparing their fall auction, which will take place in November 2021. An extensive collection of World Coins will be part of that auction. It was built over the past 40 years by a dedicated collector, who had rather limited means. Average estimates will be between 500 and 1,000 euros – providing you with many opportunities to add a rarity at a reasonable price to your collection.

You can find all results of auction 81 at

You can find all results of auction 82 at