Numismatic items that had previously been reserved for live sales at major auctions are crossing the block at internet exclusive events. The Stack’s Bowers Galleries December 2021 Hong Kong sale set the record for the largest online-exclusive numismatic auction, realizing more than $10 million in total sales. 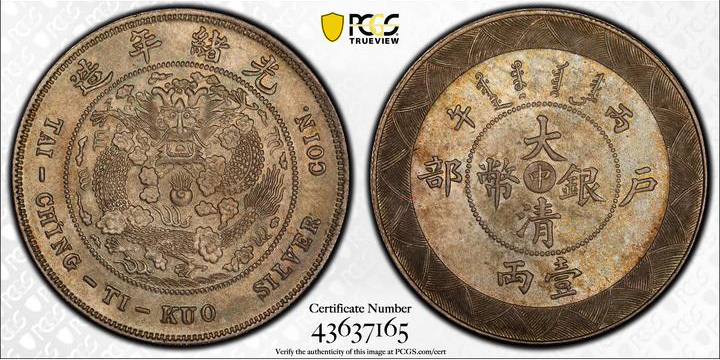 Costa Mesa, CA – As the world shifts to a more digitized environment, numismatic items that had previously been reserved for live sales at major auctions are crossing the block at internet exclusive events. The Stack’s Bowers Galleries December 2021 Hong Kong sale set the record for the largest online-exclusive numismatic auction, realizing more than $10 million in total sales. (All prices include the buyer’s fee.)

Leading the way was a Chinese Silver Tael Pattern Restrike graded Specimen-65 by PCGS that was bid to $1,350,000, nearly ten times the firm’s previous online price record for a world coin. In total, nine items in the December Hong Kong auction surpassed the previous record holder, proving that online only venues can compete with traditional live auctions. A pair of specimen Empire Dollars from 1906 were both pedigreed to a Lester Merkin sale. One was graded MS-64+ and sold for $1,260,000 while the other, graded MS-64 reached $960,000. A rare Big Beard Commemorative silver pattern from the Suchow Mint sold for $780,000, far beyond its estimate of $75,000-$125,000. This figure stands as the highest price ever recorded for an individual Chinese coin in a NGC holder.

Other areas of Asian numismatics saw strong prices continue. A Tibetan Srang from CD 1 (1909) , the finest example graded by PCGS, realized $44,400. An 1863 2 Baht from Thailand exceeded its estimate bringing $2,400, a price unimaginable for a circulated example even 18 months ago. Similar trends continued with French Indo-China, as a near-Gem 1922-H Piastre garnered $2,400. An 1842 First Opium War medal trial strike in bronze was bid to $19,200, far beyond the $3,000-$5,000 estimate. After years of stagnation, the December 2021 Hong Kong auction confirmed that the upward movement in the Japanese market seen in 2021 was more than a single sale phenomenon as an Ultra-Gem Year 45 Yen sold for $5,760, nearly double the high estimate of $3,000.

Prices for the December Hong Kong Collectors Choice Auction totaled more than $10,000,000 between coins and paper money, well over twice the high estimate for all lots of $4,380,225. The world coins had a sell through rate of 97.9% for the more than 1,500 lots offered. This sale capped a banner year for the world and ancient coin department at Stack’s Bowers Galleries, pushing final sales figures over the $100 million mark for 2021.

The firm now shifts its attention to 2022, anticipating a strong performance at the official NYINC auction where many rarities will be offered. Consignments are currently being accepted for the April 2022 Hong Kong Auction as well as for Collectors Choice Online Auctions, the next of which is scheduled for February 2022. Anyone interested in consigning world coins and paper money to Stack's Bowers Galleries is encouraged to call 800-458-4646, email consign@stacksbowers.com, or visit StacksBowers.com .