13.6 million euros: that’s the total result of Künker’s Fall Auction Sales. This is almost twice the estimate of about 7 million euros. A remarkable result that was achieved thanks to numerous prices in the six-digit range, including a new record for a Prussian coin!

13.6 million euros: that’s the total result of Künker’s Fall Auction Sales. This is almost twice the estimate of about 7 million euros. A remarkable result that was achieved thanks to numerous prices in the six-digit range, including a new record for a Prussian coin!

We know that prices on the numismatic market have been skyrocketing for several months, especially regarding pieces that combine two characteristics: perfect quality and a provenance that can be traced far back. But the hammer prices realized in Künker’s Fall Auction Sales surprised even the most experienced connoisseurs. Right now is a perfect time to sell coins – this was proven by the total result of the auction sales alone. It jumped to 13.6 million euros, almost twice the estimate of about 7 million euros.

We present the Top Five of Künker’s auction sales 352 to 354 and three remarkable results of auction 351 of ancient coins. In addition, we show you – as always – a piece outside the competition, its lucky buyer bought a great piece of history for little money.

Of course, we present the Top Five from 5th to 1st place. In case of two pieces realizing the same result, we ranked them according to the difference between estimate and hammer price.

Russia still has many surprises up its sleeve. Even though, of course, the times of constantly new record prices ended with the devaluations of the ruble, rare pieces of exceptional quality with provenances that can be traced far back still achieve amazing results. Or how would you describe the fact that a rare 5 gold ruble piece of Empress Elizabeth from 1757 – just 2,354 specimens were minted – realized as much as 110,000 euros. NGC graded it MS62. Moreover, its provenance can be traced back to 1955. Back then, the collector purchased it from the Frankfurt coin shop of Dr. Busso Peus. 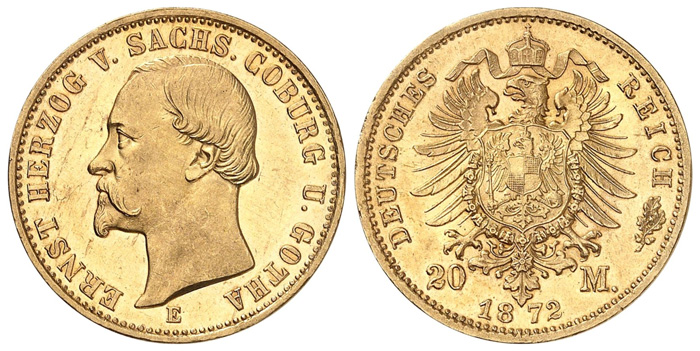 Although the prices for coins of the German Empire are still nowhere near those paid for US coins minted at the same time, they are clearly on the rise. Thus, an extremely fine to FDC 20 marks piece of 1872 by Ernest II of Saxe-Coburg and Gotha changed hands for 130,000 euros. After all, this piece is the rarest type of all gold coins of the German Empire, and it can hardly ever be found on the market in this outstanding quality. 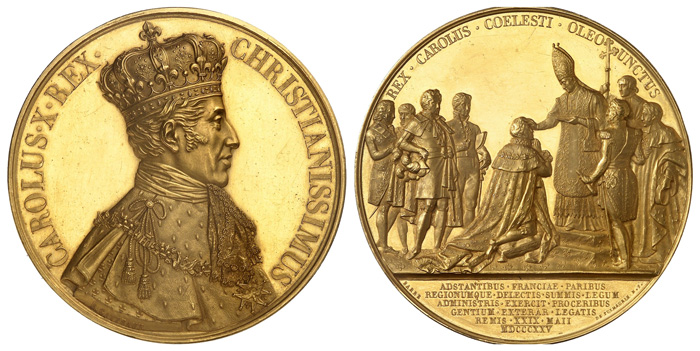 It would have probably been a surprise to anyone if the magnificent gold medal given by the French King Charles X to the Prussian ambassador Heinrich Wilhelm von Werther on the occasion of his coronation in Reims on 29 May 1825 had not been among the Top Five. This piece is of outstanding historical importance and bears witness to the fact that among Prussia’s politicians were not only enemies but also true friends of France. The piece climbed from an estimate of 25,000 euros to a hammer price of 130,000 euros. The medal combines several characteristics that made it fetch a high price: beauty, perfect quality and a provenance that can be traced far back – the medal was purchased by the collector Hermann Schwarz in 1938 at Julius Jenke in Munich – and a wonderful story is associated with it. 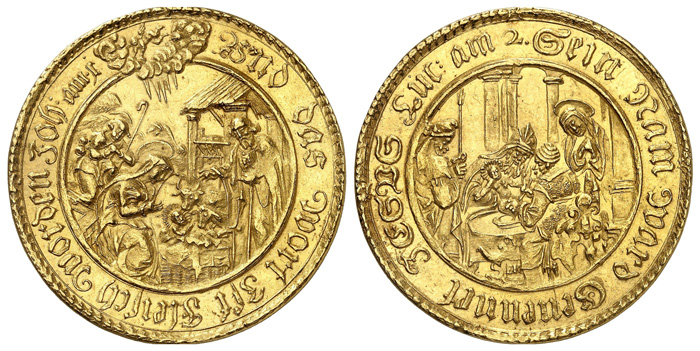 A new form of piety spread among the Catholic upper class through education in Jesuit schools. This new piety was demonstrated by the magnificent church buildings of the Baroque period, and you can also witness it on coins. A good example is this splendid off-metal strike in gold weighing 5 ducats, minted by Ferdinand of Bavaria from the dies of the schautaler. The obverse features the adoration of Christ: the perfect quality of the piece – NGC graded it MS64 – shows every detail of the poor stable, in front of it you can see the manger of the child, adored by Mary, Joseph and a shepherd in the background. The reverse depicts the Circumcision of Jesus in the temple.

Depending on the rank of the presentee, high lords distributed such schautalers of varying number, material and weight on the occasion of the New Year to courtiers, officials, servants and – in gold varieties – to friendly courts. The motif shows the values a prince stood for. Thus, Ferdinand of Bavaria demonstrated his piety by means of this motif. Today, it is difficult to believe in his piety, after all, Ferdinand certainly was no prince of the church in the sense of the Tridentine Reform. He was Elector and Archbishop of Cologne at the same time, as well as Duke of Westphalia, Prince-Bishop of Hildesheim, Liège, Münster and Paderborn as well as cathedral canon of Mainz, Trier, Strasbourg and Salzburg – to name just the most important offices he held. In addition, Ferdinand declined to be ordained as priest throughout his entire life. In this way, it was theoretically possible for him to resign from all ecclesiastical offices in order to assume the position as Duke of Bavaria in case his brother Maximilian died without children. So he was not exactly what we imagine when we think of piety – well, other ages, other world views. 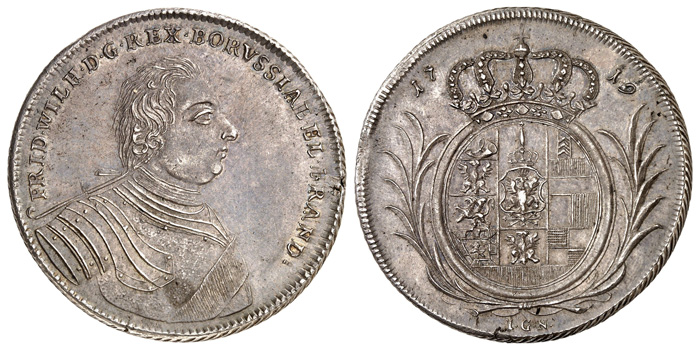 And now a fanfare for the 1st place of Künker’s Top Five results. A Prussian coin realized a hammer price of 190,000 euros. To this day, this seems to be the highest price ever paid for a Prussian coin. And it was not minted by Frederick II but by his father, the Soldier King. In 1719, he had a double reichstaler produced from the dies of the reichstaler, of which only a single specimen is in private possession. This specimen has been on the market since 1902 and has been part of three renowned collections: the Theodor König Collection, which was sold in 1902 by Sally Rosenberg, the Virgil M. Brand Collection and the Axel Tesmer Collection. Once again, rarity, perfect quality and a provenance that can be traced far back come together to set a new record price.

Let us take a look at the coins from the ancient world, to which the aforementioned aspects apply as well. The first example is a solidus featuring the portrait of Crispus from 324. The extremely fine gem with the rare special bust of the probably illegitimate son of the emperor, whose provenance can be traced back to 1923, climbed from an estimate of 75,000 euros to a hammer price of 120,000 euros.

In 2018, this very Thracian stater was offered at auction for the last time. Back then, the hammer price was about this year’s estimate. But be it 50,000 or 120,000 euros – the value of such a high-profile work of art cannot really be quantified. After all, the stater from Abdera is probably one of the most beautiful coins of antiquity. It sure is one of the most beautiful staters created by the northern Greek artists on the threshold of the late classical period to early Hellenism:

Heracles, exhausted from his deeds, relaxes on a rock. His lion skin makes the hard seat just a little more comfortable. You can see how exhausted Heracles is. He slaid too many monsters, saved too many people. At the same time, his posture indicates his willingness to get up again any time to continue to fight for the wellbeing of mankind. Heracles is the epitome of a man who strives to improve the fate of others.

This coin is minted evidence that small numismatic works of art equal the quality of the finest statues of antiquity! Yes, it demonstrates how impressive these statues were before the ravages of time robbed them of limbs and noses.

Although many had anticipated that the stater from Abdera could realize a six-digit result, everyone held their breath when the price of a simple stater featuring the tortoise of Aegina climbed higher and higher. Well, the estimate of 3,000 was rather modest. But a hammer price of 65,000 euros? This was a surprise even to the most experienced experts of the field. The reason? The piece stems from the Richard Cyril Lockett Collection, which was sold in 1959 by Glendining & Co in London. This makes the stater the most expensive tortoise of Aegina ever sold, and the second most expensive tortoise ever. 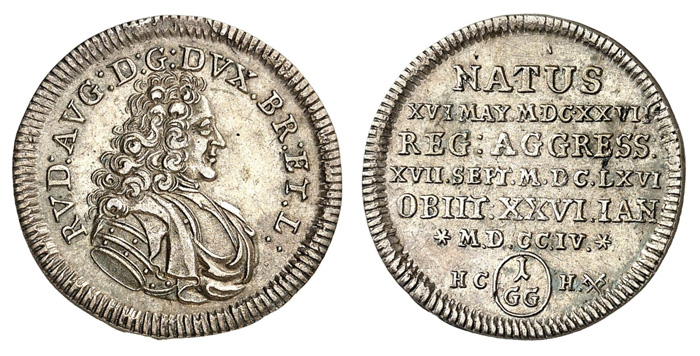 We have seen many magnificent coins so far that probably only very few readers of this auction review can afford. This does not apply to the 1704 guter groschen minted on the occasion of the death of Rudolf August on 26 January 1704, which was given to those who attended his funeral on 2 March of the same year. On that day, a large crowd of high-ranking mourners and ordinary people gathered in front of the court and palace church of Wolfenbüttel, and after the funeral service they were all presented with coins.

Why do we know that? Well, first of all it was customary to do this when a prince had died; furthermore, we have a printed copy of the funeral sermon delivered by the princely Brunswick-Lüneburg court preacher Johann Niekamp. He chose a short text from the Book of Job 29:14-16: I put on righteousness as my clothing; justice was my robe and my turban. I was eyes to the blind and feet to the lame. I was a father to the needy; I took up the case of the stranger.

That is the wonderful thing about all the coins that were minted in early modern times for great princely celebrations: they come at many different prices because at the time gifts were given to people of all social classes – but they varied in value.

If you want to learn more about this, read our article about the role of lösers in the Brunswick death ritual.

By the way, if you had been interested in one of Rudolf August’s funeral coins, auction 354 alone would have given you the choice between an extremely fine taler for 3,600 euros, an extremely fine taler with tiny scratches for 2,100 euros, an extremely fine half and quarter taler for 950 euros each, an eighth taler for 420 euros, a double guter groschen and a guter groschen for 110 euros each, a double mariengroschen for 190 euros and a FDC pfennig for 180 euros. Gold varieties were not offered in the auction and their price would have been slightly higher, but still: the history of all these pieces is the same – no matter what price you paid for your coin!

After all, you do not only collect coins but also the stories and the history attached to them – and for this it does not matter whether you invest 110 euros or 190,000 euros.

All results can be found at www.kuenker.de/en.