This Represents Only the Second Time the United States Mint Has Selected a Third-Party Auctioneer, Both Times Selecting Stack’s Bowers Galleries 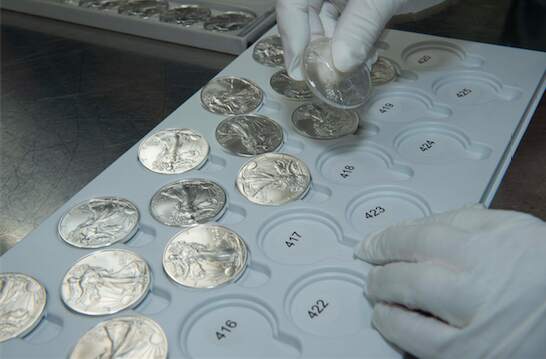 Costa Mesa, CA – Stack’s Bowers Galleries is honored to announce that they have been awarded a contract from the United States Mint to auction the 2021 American Eagle at Dusk and at Dawn 35th Anniversary coins as part of the firm’s Summer 2022 Global Showcase Auction. The United States Mint was established by the Coinage Act of April 2, 1792 and has served as a crucial foundation to the American economy for 230 years. Stack’s Bowers Galleries was founded in New York City in 1933 and has built a reputation as America’s leading auctioneer of rare coins over the past century, handing some of the greatest rarities and most valuable collections ever sold. Together, these entities will present the 35th Anniversary American Eagle at Dusk and at Dawn coins to collectors at auction this summer. In recognition of this historic offering, Stack’s Bowers Galleries will also waive the Buyer’s Premium on these 35th Anniversary coins, meaning that the highest bid on each lot (the hammer price) will be the final amount paid by the winning bidder, excluding any applicable sales tax and shipping fees.

Launched in 1986, the American Eagle Bullion Coin series has become one of the most popular and successful modern issues produced by any of the world’s mints. Prized by both bullion investors and numismatic collectors, the America Eagle series is considered the United States Mint’s signature product and offers an homage to the greatest U.S. coin designs of the 20th century.

To celebrate the 35th anniversary of the series, new reverse designs for the silver and gold eagles were released in April 2021, and the transition between the classic and new designs was commemorated in a striking ceremony at the West Point Mint. During this ceremony, then-Director of the Mint David Ryder personally operated the presses to produce the final 500 coins each of the classic gold and silver 1 ounce coins and the first 500 coins each of the new gold and silver 1 ounce coins. 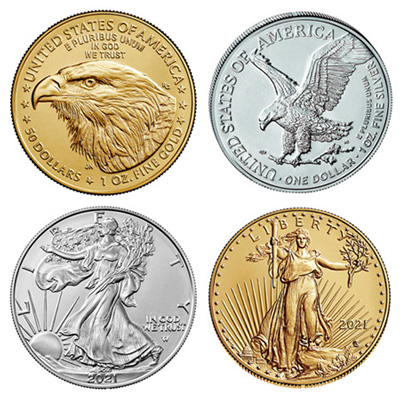 These American Eagle at Dusk and at Dawn coins will be offered exclusively by Stack’s Bowers Galleries on September 1, 2022 as part of their Summer 2022 Global Showcase Auction. These will primarily be offered in special four-coin sets containing one each of the classic gold and silver eagle 1 ounce coins and one each of the new gold and silver 1 ounce coins. The first coins struck of the new designs will be paired with the final coins struck of the classic design and this pairing format will be maintained with all sets. Each of these four-coin sets will also be accompanied by a numbered Certificate of Authenticity issued by the United States Mint. Similar two-coin sets will be offered featuring one each of the classic and new designs in gold or silver. These two-coin sets maintain the same paired striking order as the four-coin sets and are ideal for collectors focusing solely on either the American Gold Eagle or American Silver Eagle series. Select coins of particular significance will be offered individually, including the very first and last coins struck of each type. Each coin will also be graded and encapsulated by the leading grading services NGC and PCGS with custom labels to recognize their historic significance. 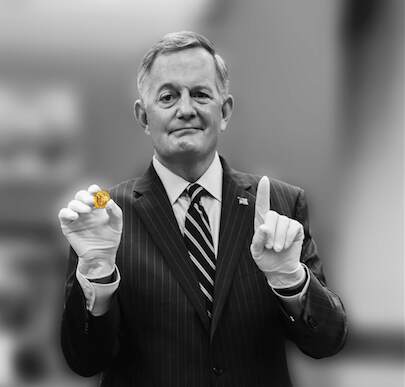 This partnership represents the very first time the United States Mint has selected a third-party auctioneer to present a special coin release to collectors, and Stack’s Bowers Galleries is honored to have been chosen for this inaugural offering. Only once before had the Mint entered a similar arrangement over their entire history—the July 2002 sale of the only 1933 Saint-Gaudens Double Eagle authorized for private ownership. Stack’s partnered with Sotheby’s for that sale, which went on to realize a then-world record as the coin sold for over $7.5 million. 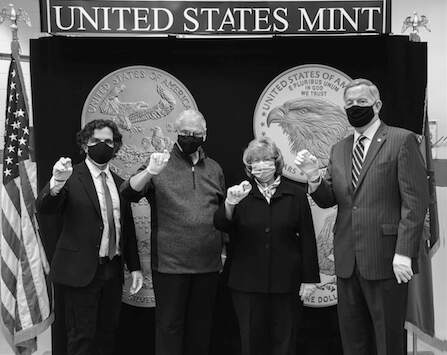 Some Stack’s Bowers Galleries noteworthy institutional offerings include their famous sale of the Garrett Collection for the Johns Hopkins University, their sale of the Massachusetts Historical Society Collection featuring the collection of President John Quincy Adams, an unprecedented collection of gold coins from the Harry W. Bass, Jr. Research Foundation, a historic offering of Washingtoniana from the Collections of the Historical Society of Pennsylvania featuring the collection of William Spohn Baker, and record-breaking treasures from the Cardinal Collection Educational Foundation. Among private collectors, they were selected to present the legendary holdings of John J. Ford, Jr., Louis E. Eliasberg, Sr., D. Brent Pogue (which ranks as the most valuable numismatic collection ever sold at over $150 million), and the Collection of Sydney F. Martin, which will also debut as part of the firm’s Summer 2022 sale.

Stack’s Bowers Galleries is honored to have been selected by the United States Mint to auction the 2021 35th Anniversary American Eagle at Dusk and at Dawn Coins and excited to present them to the collecting community in their Summer 2022 Global Showcase Auction. For more information about these historic 35th Anniversary American Eagle sets or to register for bidding in the auction, please contact Stack's Bowers Galleries today at Info@StacksBowers.com or 800-566-2580.