The gold Coiled Hair Stella is a famous rarity, with those from 1879 having only about 12 to 14 pieces known today. Heritage will be offering a fascinating rarity that is actually even harder to find than the already-difficult gold version: an 1879 Coiled Hair Stella pattern coin struck in aluminum, Judd 1640! 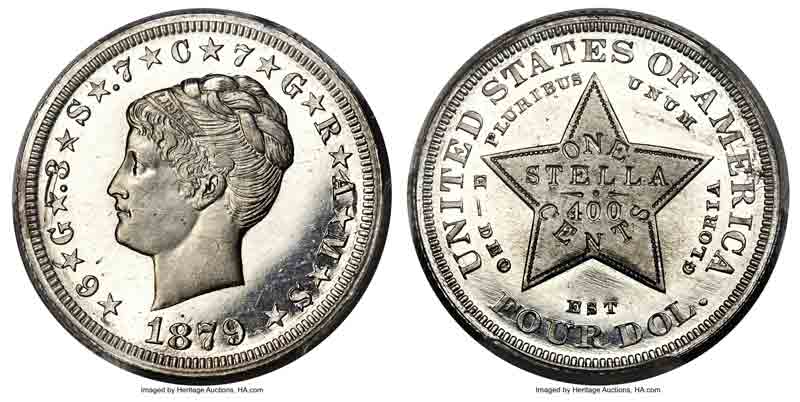 The gold Coiled Hair Stella is a famous rarity, with those from 1879 having only about 12 to 14 pieces known today. Heritage will be offering a fascinating rarity that is actually even harder to find than the already-difficult gold version: an 1879 Coiled Hair Stella pattern coin struck in aluminum, Judd 1640! This fabulous piece from the Bob Simpson Collection is rare in its own right as a pattern coin and also has the advantage of being associated with the famously short-lived Stella pattern series, which was struck for only 2 years in 1879 and 1880.

Not only the design, but also the metal this coin was struck in, was a short-lived experiment for the US Mint as well. They tried out using aluminum for a few different pattern designs but never used this metal for regular-issue coinage--it was too soft and not reliable enough for the needs of commerce. Aluminum is so ubiquitous today that it may not strike you today as a metal that would belong on the "precious metals" list or that even has much value. However, in the early and mid-1800s, it was considered in the United States and Europe to be very precious indeed. This led to the production of some rare pattern coins (trial pieces made to test out new designs or metal compositions) struck in aluminum. In fact, for a time during the 1800s, aluminum was more valuable than gold!

As an example, the most honored guests of French ruler Napoleon III dined with aluminum cutlery, while the less-important were only able to use the more everyday silver forks and knives. The issue was not necessarily scarcity but rather than most people did not understand how to scientifically make use of aluminum. It was not until scientists found easy ways to release this metal from its ore (starting in 1886) that it fell from its favored position as an uncommon element to become something very pedestrian. Before that point eventually came, just a few very special aluminum pattern coins were created that have occasionally survived to be enjoyed by collectors today.

In addition to the great story behind it, this is an attractive coin that really stands out. It even has cameo contrast that lends a striking look to the frosty devices compared to the mirrored fields. Check out this intriguing piece here where it is expected to sell for 6 figures.