Can You Spare A Trime? 3-Cent Silver Coins Popular With Collectors

Measuring only 14 millimeters in diameter and weighing four-fifths of a gram upon its release in 1851, the 3-cent silver coin is miniscule by every physical measure but a heavy hitter in the eyes of type collectors. 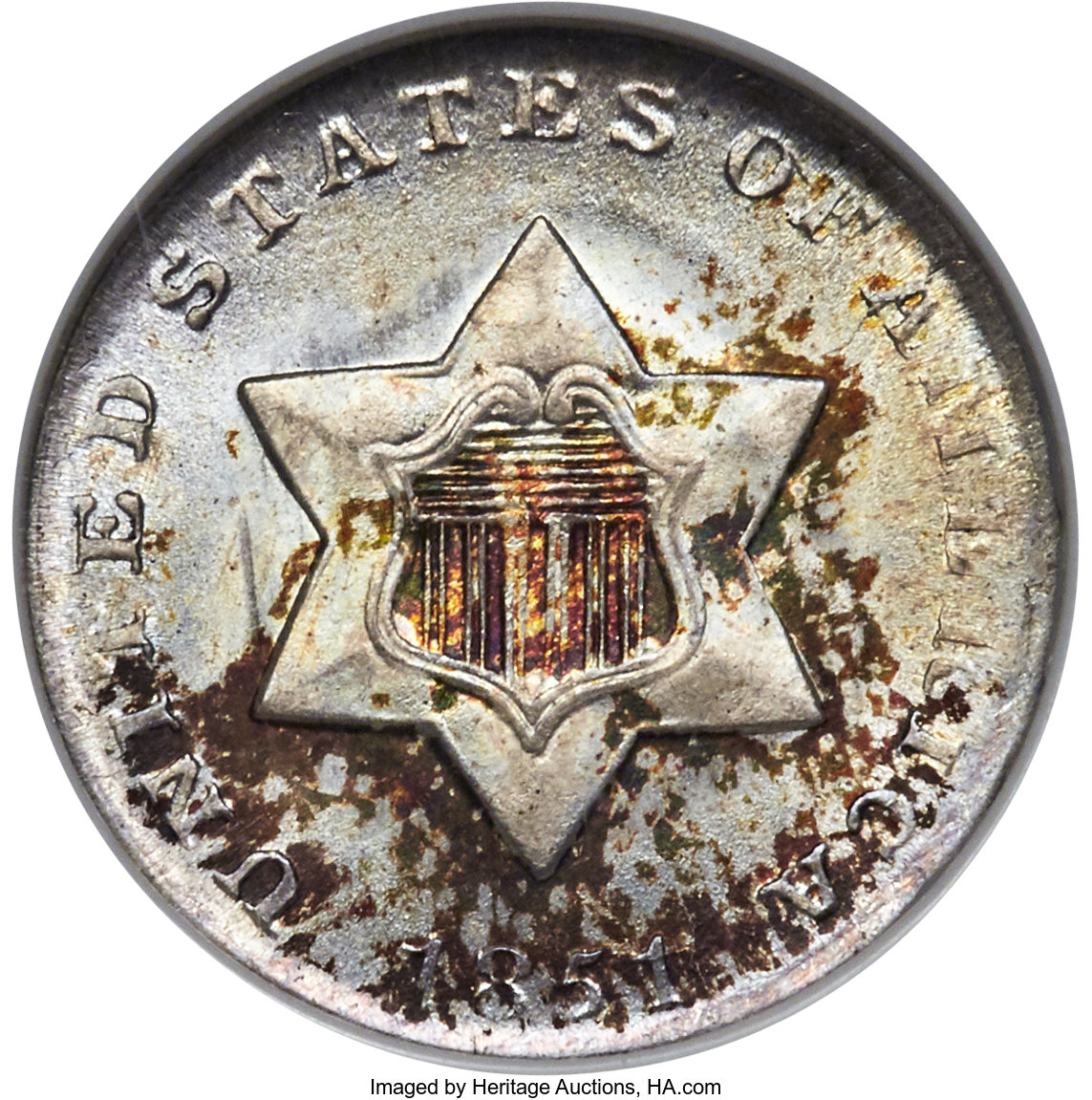 Can You Spare A Trime? 3-Cent Silver Coins Popular With Collectors

Measuring only 14 millimeters in diameter and weighing four-fifths of a gram upon its release in 1851, the 3-cent silver coin is miniscule by every physical measure but a heavy hitter in the eyes of type collectors. The 3-cent silver coin arose as a practical solution for postage payments at a time when domestic postal rates had fallen from five cents to three cents. The thin silver piece also served an important role as a much-needed small-denomination coin, and thus the 3-cent silver coin was heavily used for a period during the mid 19th century.

A Closer Look at Trimes

Variety I, struck from 1851-1853, has the plainest version of the main design in comparison to more ornate latter varieties and was struck with a 75% silver, 25% copper composition. It is with Variety I that collectors encounter the only mintmarked issue – the 1851-O from the New Orleans Mint. The “O” mintmark is located on the coin’s reverse, immediately to the right of the “C.”

During the Civil War, from 1861 through 1865, many Americans hoarded trimes and other silver coins, not to mention small-denomination coinage such as 1-cent and 5-cent pieces. Circulating private tokens, encased postage stamps, and fractional paper currency helped carry Americans through the challenging nationwide coin shortage, which the United States Mint addressed with the issuance of new base-metal coins. Among these new issues, all designed by Longacre, are the copper 2-cent piece released in 1864, the 3-cent nickel that premiered in 1865, and the copper-nickel version of the 5-cent issue – now simply called the “nickel” – that debuted in 1866.

The Coinage Act of 1873 brought an end to production of the 2-cent coin, trime, and half dime. Meanwhile, the 3-cent nickel, simultaneously produced with its silver counterpart from 1865 through 1873, lasted until 1889. The 3-cent nickel’s demise was spurred in part by the reduction of the postage rate in 1882 from three cents to two cents. The 3-cent nickel’s diameter – 17.9 millimeters, identical to the dime – had also caused some degree of public confusion and created new problems with the introduction of mechanical coin-operated vending machines in the early 1880s.

Still, there are many enthusiasts who seek every date and variety, not to mention dedicated registry set builders who pursue the best third-party-graded examples. According to the CPG® Coin & Currency Market Review, common examples of 3-cent silver coins typically start between $25 to $50 for well-circulated examples from the early 1850s. Common Mint State examples easily command $250 to $500 each, with gem specimens climbing well into the four-figure range and beyond. Proofs usually trade for $350 to $1,000 each, with many higher-priced exceptions for better examples and scarcer proof issues.

In terms of mintages, the most common pieces among the short-lived series are from the 1850s, with six issues boasting production figures of more than 1 million pieces and three – the 1851 (Philadelphia), 1852, and 1853 – exceeding 5 million each. Two of those surpass production totals of 10 million each, with mintages of 18,663,500 and 11,400,000 for the 1852 and 1853, respectively. Meanwhile, the 1851-O, the only mintmarked issue among the series, saw a mintage of just 720,000. The Professional Coin Grading Service (PCGS) reports far fewer survivors today, with even the most common Philadelphia issues from the early 1850s each estimated to have perhaps only 25,000 to 35,000 surviving examples across all grades.

Lerner says 3-cent silvers dated between 1863 and 1873 are tough across the board. “The total mintage is under 100,000 pieces for all of those business strikes combined, and I would estimate that less than 5% of that number survive – that’s around 4,000 pieces. That really is the definition of scarce, insufficient for the demand. In fact, if demand rose among collectors the prices for the tough dates would skyrocket.”

Beyond regular-issue key dates and uncirculated 3-cent silvers, trime enthusiasts can stay busy searching for varieties. “There are actually quite a few interesting ones to look for,” Lerner says. “The holy grail would be the 1852 Inverted 1, of which perhaps five or six have been located.” The few known specimens are worth about $700 and up in the better circulated grades. Conversely, the 1862 2 Over 1 overdate is far more common and represents a ripe cherrypicking opportunity for astute collectors. “It’s often not labeled as such on slabbed holders.” The 1862 2 Over 1 overdate was discovered in the early 1960s and has become one of the most popular varieties in the series. PCGS estimates 3,000 specimens exist across all grades, with Fine-12 specimens trading for about $55 apiece, about the same price as similarly graded examples of “ordinary” 1862 trimes, which are roughly three times as common. Two other overdates, the proof 1863 3 Over 2 (listed as a “so-called” overdate in A Guide Book of United States Coins) and 1869 9 Over 8 are very scarce and are worth several thousands of dollars in choice grades, with PCGS listing 50 or fewer total survivors for each variety.

The Trime Market Is Diverse

While series enthusiasts are certainly major players in the 3-cent silver market, a large share of trimes wind up in type sets. “Many of the 3-cent pieces are sold to type collectors who are either looking for just one nice example or perhaps three pieces – one of each type. “For the type collectors out there, here is what I would recommend: an 1851-O as a Type I, which is always in demand and is the only branch-mint date; 1855 is my suggestion for the Type II, as this is the toughest of the Type II and hard to find above MS-64; 1873 is a proof-only year, making it a nice coin to round out a type set as only 1,000 were minted – these are Closed 3.”