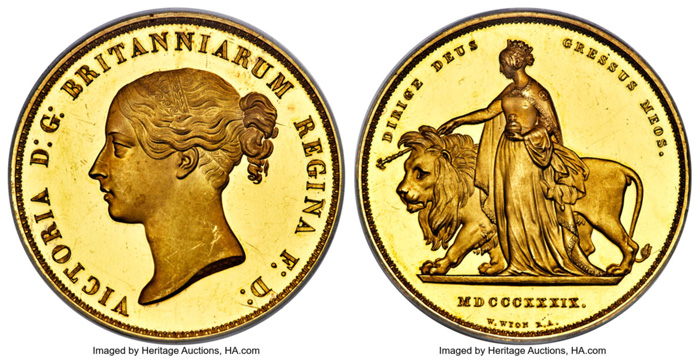 The Victoria gold Proof “Una and the Lion” 5 Pounds 1839 PR64 Deep Cameo PCGS (estimate: $400,000-600,000), by William Wyon, is a stunning coin pursued by collectors around the world. Indeed, it has transcended the confines of British numismatics and has become a coin type that is collected by trophy hunters worldwide.

“The popularity of the Una and the Lion has soared in recent years,” Heritage Auctions Executive Vice President of Numismatics Cris Bierrenbach said. “Widely recognized among the most beautiful British coins ever struck, this is an extraordinary opportunity to acquire a magnificent coin that rarely becomes available in such an exceptional state of preservation.”

A Charles III 8 Reales 1786 Mo-FM AU58★ NGC is believed to be the only remaining example of a fascinating relic from the Captaincy of Venezuela. In late 2006, Tomás Stohr revealed documentary evidence for the production of a special underweight series to mitigate a dearth of coinage in Caracas and its environs c. 1786 after the discovery of an underweight 1787 Charles III Mexican 2 Reales in the ANS Collection. A 1786 Royal Ordinance decreed the minting of 1/2, 1 and 2 Reales in Mexico (the capital of the Viceroyalty of New Spain); to promote local circulation in Caracas and the neighboring Spanish-occupied Windward Islands (Barlovento Islands), such coins were minted at 40% below standard weight. Although the Governor of Caracas originally petitioned for 2 million Pesos worth of coins, and the Ordinance of February 3, 1787 directed the mintage of 200,000 Pesos-worth, by all appearances the Spanish government was incredibly thorough in their destruction of the issue. This final coin is especially important in considering the piece on offer here, as both seemingly were struck in contravention of the original authorization, which made no provisions for the minting of either 4 or 8 Reales. This specimen is the only 8 Reales known to survive from this order.

From the Madrid mint, an Amadeo I gold Specimen 100 Pesetas 1871(71) SD-M SP63 PCGS (estimate: $150,000-200,000) is a magnificent Spanish rarity in gold. The offered example is the first ever offered through Heritage Auctions. Amadeo’s short reign, from 1870-73, allowed little time for large-scale production of gold coinage; the low mintages dictate Pattern-like rarity, making them virtually unattainable to collectors, as even fewer appear to have survived than were originally minted – it has been suggested that as few as six to eight of the 1871 100 Pasetas remain, making this example an unlikely survivor in its choice-certified state and the finest recognized by the grading services, which have recognized just three other examples. Current certification figures account for perhaps half of all remaining examples, of which the offered specimen is the finest certified example.

From British India, a William IV gold Proof Restrike 2 Mohurs 1835.-(c) PR65 Ultra Cameo NGC (estimate: $100,000-150,000) is exceptionally rare in Gem Proof status, especially with a recognized Ultra/Deep Cameo contrast. The offered example is the finest of just seven to earn that designation from NGC; none has been certified by PCGS.

From a mintage of just 150, a George IV gold Proof 5 Pounds 1826 PR63 Ultra Cameo NGC (estimate: $100,000-120,000) is one of the more iconic and sought-after issues of 19th-century British numismatics, notable for its expansive size and portrait of George IV. By William Wyon after Chantrey, with a reverse by Jean-Baptiste Merlen, the portraiture executed by Wyon on the issue seems to add a new degree of prominence to Merlen's already flattering effigy drawn from the style of Sir Francis Chantrey, idealizing his features and seeming to abstract any sense of the King's real-life portly stature.

For images and information on all lots in the auction, visit HA.com/3097 .