Two vintage gold ultra-rarities certified by Numismatic Guaranty Corporation® (NGC®) will each sell for over $1 million in a Heritage Auctions sale of US coins from the extraordinary Paramount Collection. 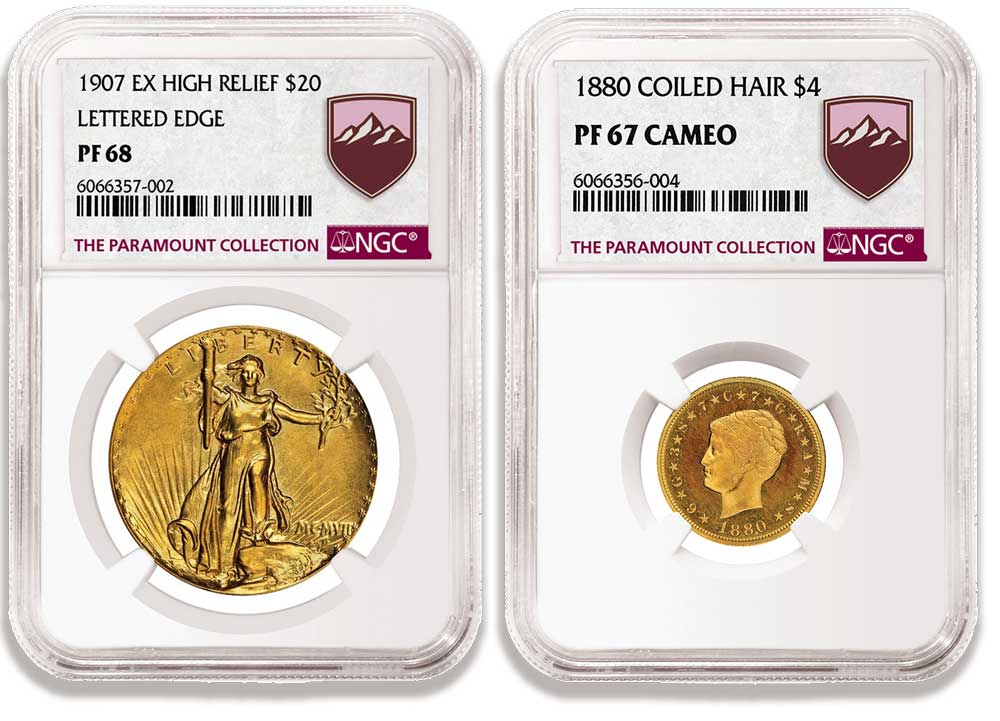 SARASOTA, Fla. (February 9, 2021) — Two vintage gold ultra-rarities certified by Numismatic Guaranty Corporation® (NGC®) will each sell for over $1 million in a Heritage Auctions sale of US coins from the extraordinary Paramount Collection. Bidding is now open for the auction, which is scheduled for February 18-21, 2021.

At center stage is a 1907 Extremely High Relief, Lettered Edge $20 graded NGC PF 68 . More than a week before the auction, bidding had already exceeded $1.3 million for this exquisite example of the famous Saint-Gaudens Double Eagle.

Only about 20 of these coins are known in Extremely High Relief, sometimes referred to as “Ultra High Relief.” Designed by renowned sculptor Augustus Saint-Gaudens, the striding Liberty figure on the obverse and flying eagle on the reverse are generally believed to be America's most beautiful gold coin design.

As much a sculptural work as a pattern coin, these initial examples reign as some of the most prized artifacts in all of US coinage. The Mint went on to create more than 11,000 business strikes of the 1907 Double Eagles with a High Relief design, before switching to a more practical version with a more normal relief, which was necessary for mass producing them.

Sharing the spotlight in the sale is another extremely rare gold coin, an 1880 Coiled Hair Stella graded NGC PF 67 Cameo . More than a week before the auction, bidding had already exceeded $1 million.

These $4 gold coins were meant to compete in international trade with European coins of similar worth, but only a few hundred patterns were struck before the experiment was canceled. Versions exist dated 1879 and 1880, with the Liberty head on the obverse sporting either coiled hair or flowing hair. The 1880 Coiled Hair is the rarest — with only nine known to exist — and the Paramount Collection example is among the finest of these.

“These Paramount Collection ultra-rarities will be the third and fourth NGC-certified vintage US coins that have sold for more than $1 million at auction in just the first two months of 2021,” said Mark Salzberg, NGC Chairman and Grading Finalizer. “I am pleased that demand is strong for coins backed by NGC's expert and impartial certification.”

The Paramount Collection also includes an 1879 Flowing Hair Stella graded NGC PF 65 Cameo that should sell for well into the six figures. Several hundred of these were struck, and competition is fierce whenever they come to auction, especially for an above-average example such as this.

Another rare coin in the sale is a 1796 No Stars $2.50 graded NGC MS 62 . This is one of the finest of about 100 certified examples of the nation's inaugural quarter eagle. Stars were later added to the obverse design of this coin, which initially had low mintages due to the fact that it was not commonly used in commerce.

The Paramount Collection also includes one of the great silver rarities: an 1895 Morgan Dollar graded NGC PF 67 Ultra Cameo . None of the 12,000 business strike Morgan Dollars reportedly struck in Philadelphia that year have even been located, leaving only the 880 Proof coins to satisfy collector demand for this key date. The grade of this particular example places it near the top of the certified population.

The ambitious NGC-certified Paramount Collection also includes some of the greatest world and ancient coins known such as an extremely rare Great Britain 1937 Edward VIII 5 Sovereign Pattern and a Roman Empire Gold Medallion of Magnentius, an ill-fated usurper emperor. To learn more about the Paramount Collection, click here .

“Heritage Auctions is proud to offer the Paramount Collection, which features some of the greatest rarities in numismatics,” said Jim Halperin, Co-Chairman of Heritage Auctions. “With the confidence that NGC certification provides, we are already seeing intense interest among bidders.”

Other NGC-certified highlights of the Paramount Collection in this sale include: