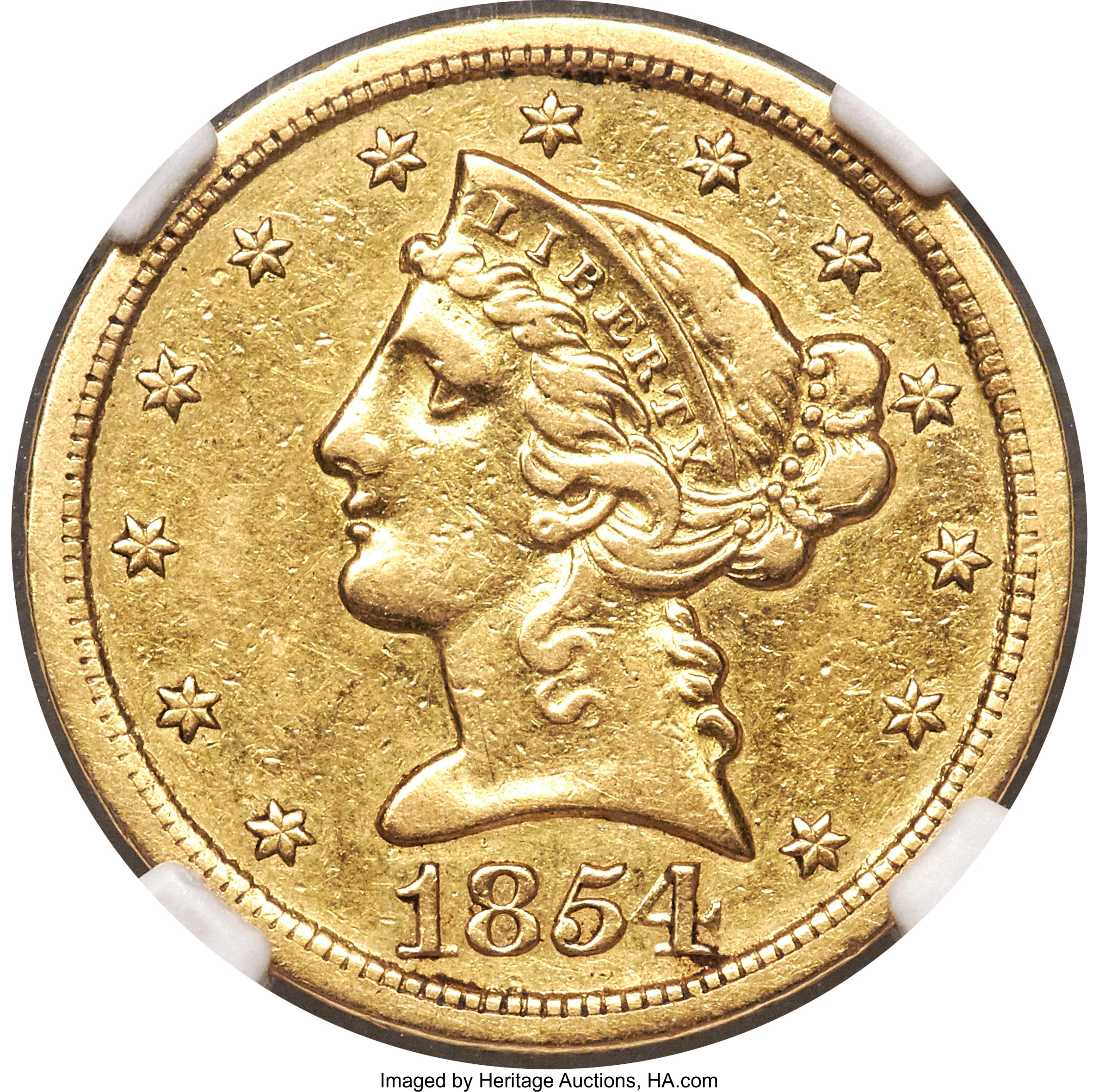 On August 15th during an auction held at the American Numismatic Association’s World Fair of Money in Philadelphia, John Brush of David Lawrence Rare Coins (DLRC) and John Albanese of Certified Acceptance Corporation (CAC) acquired the fourth identified example of the world-famous 1854-S No Motto Half Eagle for $2.16 million.

The coin, which was graded and authenticated by Numismatic Guaranty Corporation (NGC) as Extremely Fine 45, was recently discovered by a New England collector who had the coin submitted to NGC by a dealer acquaintance believing it to be counterfeit. Prior to the discovery of this piece, only three examples were known from an original mintage of 268 coins during the San Francisco Mint’s first year of production. One such example resides in the Smithsonian Institution’s National Numismatic Collection (from the Josiah K. Lilly Collection), another was stolen during a well-known armed robbery in 1967 of the DuPont Collection, and the last example, graded by PCGS as AU58+ resides in the Pogue Family Collection.

Mr. Brush stated: “This is a bucket-list coin that is certainly among the top five gold coin rarities in American Numismatics. We had previously submitted a slightly higher offer to purchase the coin directly before it was submitted to auction, but in the end, we were able to purchase the coin a few months later for a slightly better price. We were thrilled to partner with Mr. Albanese in the purchase of this rarity as we have long been friends and sharing in the excitement of acquiring such a rare coin was a true pleasure.”

Mr. Albanese, the founder and president of CAC, has long been known as a leader in the coin industry and has earned a stellar reputation in handling the most important U.S. coins. With the 1854-S Albanese stated, “This is the first real opportunity that I’ve had to acquire this historic item. It fell into our laps at what we thought was an absolute bargain for the price and to partner with David Lawrence Rare Coins on it was simply icing on the cake.”

While Mr. Brush and Mr. Albanese both thought that the coin might remain in inventory for their respective firms for quite some time, they received an offer less than 30 minutes after the sale ended and they were able to place it in a new home.

Historically, the 1854-S $5 has been considered out of reach for collectors due to its lack of availability in auctions, but this “Discovery of a Lifetime” example has added a significant piece to the upper echelon of numismatics.