Heritage Auctions will be doing some heavy lifting in the January FUN Auction #1341 when an unbelievable 1949 silver ingot from the New York Assay Office crosses the auction block. This hefty piece of historical silver weighs 1016.46 Ounces and has to be seen to be believed! 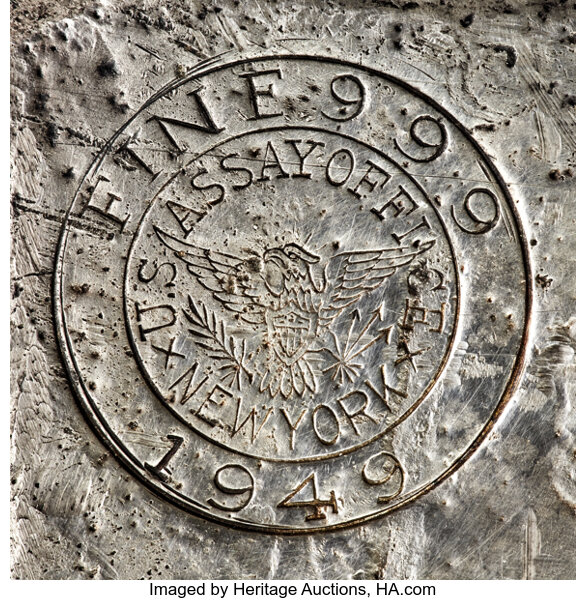 Heritage Auctions will be doing some heavy lifting in the January FUN Auction #1341 when an unbelievable 1949 silver ingot from the New York Assay Office crosses the auction block. This hefty piece of historical silver weighs 1016.46 Ounces and has to be seen to be believed!

The US Assay Office in New York City was once a bustling center for testing gold and silver and turning it into something new. The story behind the building that created fascinating precious metal ingots is almost as interesting as the pieces themselves.

This office operated from the era of the Gold Rush in 1854 until 1982, melting down gold and silver brought into the government and refining it to a clear purity and weight. It originally opened to purchase the gold which was being found in California starting in 1849, its function decreased over the years as gold discoveries dwindled. The location also collected damaged paper money and gold coins--which were in circulation until 1933--to remove these from circulation. According to Samuel Armstrong Nelson in 1900 in his The ABC of Wall Street,

"The building is employed in assaying, parting and refining crude bullion, coin, jewelry, old bars and the precious metals in such other forms as they may be presented. All metal is turned out in the form of bars of various weight, stamped by the Government with letters and figures which certify to the weight and quality of the metal. Most of the work is done for private persons ... "

The New York Assay Office eventually closed in 1982, and shortly thereafter, this historic location set a record as the most valuable piece of government real estate ever sold at auction to date. It realized the then-dizzying sum of $27,000,000 at auction. Having seen the changing nature of the country as well as New York City itself, the property just south of Wall Street sold to a real estate developer with plans to build a skyscraper. 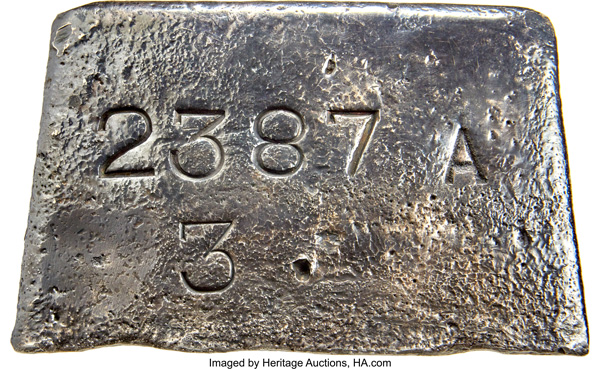 This humble five-story building, which had spent its tenure of over 125 year melting and refining gold into bars such as this one, was to become part of modern New York City and its ever-taller buildings. Despite the many changes to the New York skyline, one can still purchase the historic bars and ingots created by the New York Assay Office upon rare occasion at auction.

While the history of the building itself is known, the story of the actual gold and silver ingots is enigmatic. Relatively little has been studied about these fascinating pieces. As our catalogers explained in a prior listing, "We have stated in the past, and it bears repeating, New York Assay Office ingots are a remarkably understudied area in U.S. numismatics. We have only handled 32 ingots over the past 18 years and we can only draw a couple of generalizations from the bars we have encountered. There appear to be only two hallmark variations, and each ingot is dated (unlike many San Francisco ingots)." The January FUN auction will include a few fascinating assay ingots, but this enormous 1,016.46 ounce ingot dwarfs its more moderately-valued cousins in this auction. We expect significant interest when these ingots come up for bid.

Check out the huge one here: