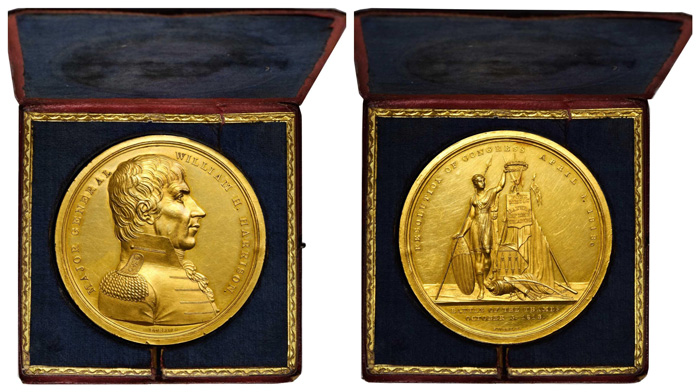 Costa Mesa, CA – In their Official Auction of the ANA World’s Fair of Money, Stack’s Bowers Galleries is proud to offer a unique Congressional Gold Medal presented to Major General, and later President, William Henry Harrison. This treasure, found in lot 5022, combines the ultimate Congressional award with the highest American office into a single relic of incomparable historical importance. It was awarded at the White House in 1825 to recognize Harrison’s victory at the Battle of the Thames during the War of 1812 and was struck in a substantial 7.6 troy ounces of fine gold. Passed down through the Harrison family and held in a private collection in recent years, this marks the medal’s first ever auction appearance and is sure to attract tremendous excitement from the collecting community.

Victories by the United States during the War of 1812 were broadly recognized with Congressional Gold medals -- 27 in all. However, of those, just 10 survive and only three are not held by institutions. As the only such medal presented to a president of the United States, the William Henry Harrison medal offered by Stack’s Bowers Galleries is unquestionably the most historically significant of these.

Harrison's War of 1812 victory at the Battle of the Thames was important militarily and politically, leading to increased enlistments and a newfound control of the Northwest theatre. Harrison first ran for President as a Whig candidate in 1836, and then again successfully in 1840, defeating Van Buren who had already served one term. William Henry Harrison was inaugurated as the ninth president on March 4, 1841, though he fell ill on March 26. After one month in office, William Henry Harrison, the Hero of Tippecanoe and the Battle of the Thames, died on April 4, 1841, the first President to die during his term.

Only four American presidents ever received Congressional Gold medals for their military exploits, including Andrew Jackson, William Henry Harrison, Zachary Taylor, and Ulysses S. Grant. Zachary Taylor was presented with three gold medals for victories in the Mexican-American War, all of which have been offered by Stack’s Bowers Galleries including an 1848 Battle of Buena Vista medal that realized $460,000 in November 2006.

This William Henry Harrison medal is one of two gold War of 1812 military medals in private hands, and it is the only Congressional gold medal owned by two presidents of the United States, William Henry Harrison and his grandson Benjamin Harrison. As a collectible or the centerpiece of an interpretive institutional collection, this medal is a landmark.

This massive gold medal depicts Major General Harrison in military dress on the obverse with a symbolic portrait of the goddess Victory on the reverse. The surfaces are deeply reflective, indicating both careful preservation and exacting production on a well-polished blank from equally polished dies. The edge is neatly drilled in five places, with those at the top clearly designed to allow for a chain or strap to pass between the holes and support the medal for suspension. The medal is accompanied by the original U.S. Mint box and slipcase, a rare feature among early American medals.

In 2015, this medal was acquired from a Harrison family descendant by the Raab Collection, a Pennsylvania-based firm specializing in historic manuscripts, and then sold to a private collector. It has never before been sold at auction, making its appearance in the Stack’s Bowers Galleries August Auction a truly historic event.

This incredible Congressional Gold Medal will be offered on Thursday, August 18th in lot 5022 of the Stack’s Bowers Galleries Official Auction for the ANA World's Fair of Money, accompanying a vast selection of world-class rarities including the finest known 1804 dollar, a newly discovered 1794 dollar, an original 1827/3 quarter, a Mint State 1796 Stars quarter eagle, and many other treasures. The sale is available on the firm’s website www.StacksBowers.com for viewing and bidding, featuring high-resolution images, Coins In Motion animations and their user-friendly bidding platform. The Live portions of the August sale will be held from August 16th through the 21st and broadcast in high definition across several platforms including their website, Facebook and YouTube. The Internet-Only sessions will take place the next week, August 23rd through 25th. For questions about bidding or to request an in-hand inspection from one of their specialists, please contact their auction services department at 800-458-4646 or e-mail info@stacksbowers.com.​