This multi-year series that started in 2018 honors innovation and innovators by issuing $1 coins for each of the 50 states, the District of Columbia, and the five U.S. territories. 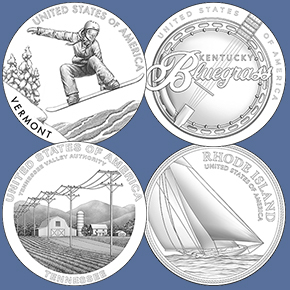 WASHINGTON – The United States Mint (Mint) today officially announced the designs for the 2022 American Innovation $1 Coin Program. This multi-year series that started in 2018 honors innovation and innovators by issuing $1 coins for each of the 50 states, the District of Columbia, and the five U.S. territories. The Mint works with the Governor’s offices of each state, along with subject matter experts, to determine design concepts emblematic of innovation significant and meaningful to their jurisdiction and/or its role in the nation. Once the Secretary of the Treasury approves the design concepts, the designs are developed and reviewed. The Secretary of the Treasury selects the final design for each coin. The 2022 designs honor innovations and/or innovators from Rhode Island, Vermont, Kentucky, and Tennessee.

“From the birthplace of the industrial revolution to the first working offshore wind farm in America—innovation thrives in the Ocean State,” said Rhode Island Governor Dan McKee. “I’m proud that Rhode Island’s $1 coin pays tribute to our state’s manufacturing roots and sailing heritage.”

“I am proud to have snowboarding representing Vermont in the Innovation $1 program,” said Vermont Governor Phil Scott. “In many ways, Vermont is the birthplace of modern snowboarding, and this coin represents Vermont’s contributions to the sport, from physical innovations in boards and bindings to the creativity and athleticism showcased by Vermonters—and others who train in the Green Mountains—in competition on the world stage.”

“Bluegrass music is renowned worldwide as a deeply American—and thoroughly Kentuckian—art form. Arising in the 1940s from Appalachia on the fleet fingers and high, lonesome harmonies of icons like Bill Monroe and many others, bluegrass has come to represent the soul of our commonwealth,” Kentucky Governor Andy Beshear said. “The American Innovation $1 Coin Program honors the trailblazers and accomplishments that continue to keep our great nation at the vanguard in industry and culture. Kentuckians long have been leaders and innovators across a wide spectrum of arts, thought, and commerce. As a state born of the pioneer spirit, we are proud to see our commonwealth celebrated and represented in this exciting program from the U.S. Mint.”

“The Tennessee Valley Authority’s innovation has sparked growth and economic development across our rural communities,” said Tennessee Governor Bill Lee. “I thank the U.S. Mint for highlighting the efforts of Tennessee trailblazers and look forward to the coin’s release.”

United States Mint Director David J. Ryder believes that the symbols of innovation chosen by the states and territories will have unifying and educational value. “The very nature of this program provides us an opportunity to learn about the many contributions Americans have made that have propelled this country forward,” he said. “As we celebrate the innovations of the past, we look forward to those yet to come.”

American Innovation – Vermont
Designer: Justin Kunz, Artistic Infusion Program
Sculptor: Craig Campbell, Medallic Artist
The Vermont $1 Coin features a young female snowboarder in the air performing a trick called a “melon grab,” set against a mountainous winter skyline inspired by the landscape of Vermont. The aim of the design is to capture a sense of the energy and exuberance of snowboarding through movement implied by diagonal lines and curved shapes. Inscriptions include “UNITED STATES OF AMERICA” and “VERMONT.”

American Innovation – Kentucky
Designer: Christina Hess, Artistic Infusion Program
Sculptor: Renata Gordon, Medallic Artist
The Kentucky $1 Coin pays homage to the home of bluegrass music. This design features a banjo, an important bluegrass instrument, tilted to one side, alluding to the rhythm and movement of the music. Inscriptions include “UNITED STATES OF AMERICA,” “BLUEGRASS,” and “KENTUCKY.”

The obverse (tails) design of American Innovation $1 Coins features a dramatic representation of the Statue of Liberty in profile with the inscriptions “IN GOD WE TRUST” and “$1.” The design also includes a privy mark of a stylized gear, representing industry and innovation.

The edge-incused inscriptions are “2022,” the mint mark, and “E PLURIBUS UNUM.”