The multi-year series that started in 2018 honors innovation and innovators by issuing $1 coins for each of the 50 states, the District of Columbia, and the five U.S. territories. 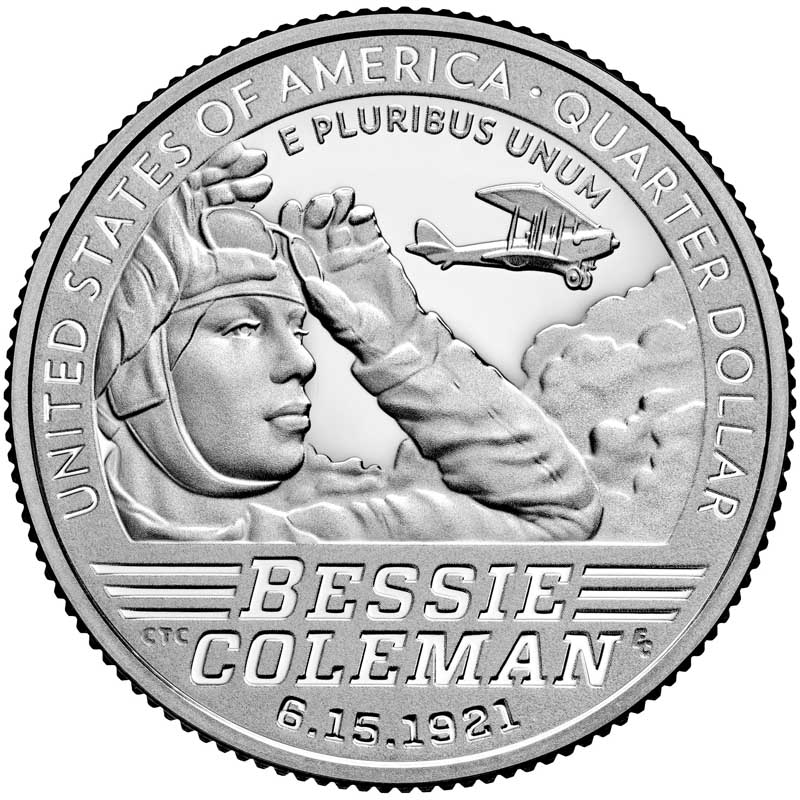 Reverse side of the 2023 Bessie Coleman Quarter

Reverse side of the 2023 Bessie Coleman Quarter

“The first coin of the 2023 American Women’s Quarters™ Program honors the life and legacy of Bessie Coleman,” said Mint Director Ventris C. Gibson. “The woman known as “Brave Bessie” defied the odds and became an aviator. Her tenacious drive and fearless personality helped pave the way for future generations.”

The reverse (tails) depicts Bessie Coleman as she suits up in preparation for flight. Her expression is reflective of her determination to take to the skies, the only place she experienced a freedom she did not have on the ground. The inscriptions are “UNITED STATES OF AMERICA,” “QUARTER DOLLAR,” “E PLURIBUS UNUM,” “BESSIE COLEMAN,” and “6.15.1921,” the date Coleman received her pilot’s license. The reverse was designed by United States Mint Artistic Infusion Program Designer Chris Costello and sculpted by United States Mint Medallic Artist Eric David Custer.

“As I researched Bessie Coleman’s life, I discovered that the existing photographs and illustrations of her were posed and very familiar,” said Costello. “I challenged myself to create an original, never-before-seen portrait that was not based on any known photo. My wife and young daughter, who are of African and Native American heritage, modeled for my drawing that depicts her in a more active posture—readying her goggles as she takes to the skies. In the background, her Curtiss “Jenny” biplane is seen soaring through the clouds.”

Costello further provides a deeper insight of the image of Bessie Coleman.

“This new portrait of Bessie Coleman depicts her fierce determination and unyielding resolve to become a licensed pilot during a time of stiff opposition to ambitious women of color,” said Costello.

The obverse (heads) depicts a portrait of George Washington originally composed and sculpted by Laura Gardin Fraser to mark George Washington’s 200th birthday. Though her work was a recommended design for the 1932 quarter, then-Treasury Secretary Mellon ultimately selected the familiar John Flanagan design. Of Fraser, Director Gibson said, “I am proud that the new obverse design of George Washington is by one of the most prolific women sculptors of the early 20th century. Laura Gardin Fraser’s work is lauded in both numismatic and artistic circles. Ninety years after she intended for it to do so, her obverse design has fittingly taken its place on the quarter.”

Obverse inscriptions are “LIBERTY,” “IN GOD WE TRUST,” and “2023.” The design is common to all quarters issued in the series.

Coins featuring additional honorees will also ship in 2023 through 2025.

Each 2023 AWQ honoree is a powerful, inspiring example of the breadth and depth of accomplishments being celebrated through this historic coin program.

In addition to Bessie Coleman, the four women who will be honored in 2023 are:

The range of accomplishments and experiences of these extraordinary women speaks to the contributions women have always made in the history of our country. Coleman was a trailblazing pilot who paved the way for many. Idar and Roosevelt were social justice advocates who were both ahead of their time with their ideas and ideals, and Kanakaʻole and Tallchief spoke up for and represented indigenous women in their respective cultures.

Authorized by Public Law 116-330, the American Women Quarters Program features coins with reverse (tails) designs emblematic of the accomplishments and contributions of American women. Beginning in 2022 and continuing through 2025, the Mint is issuing five quarters in each of these years. The ethnically, racially, and geographically diverse group of individuals honored through this program reflects a wide range of accomplishments and fields, including suffrage, civil rights, abolition, government, humanities, science, space, and the arts.

Please consult with your local banks regarding the availability of AWQ Program quarters honoring Bessie Coleman in late January and early February.