This unique and intriguing note was accidentally printed with a Del Monte banana sticker obstructing part of the design and has been nicknamed "The Del Monte Note." 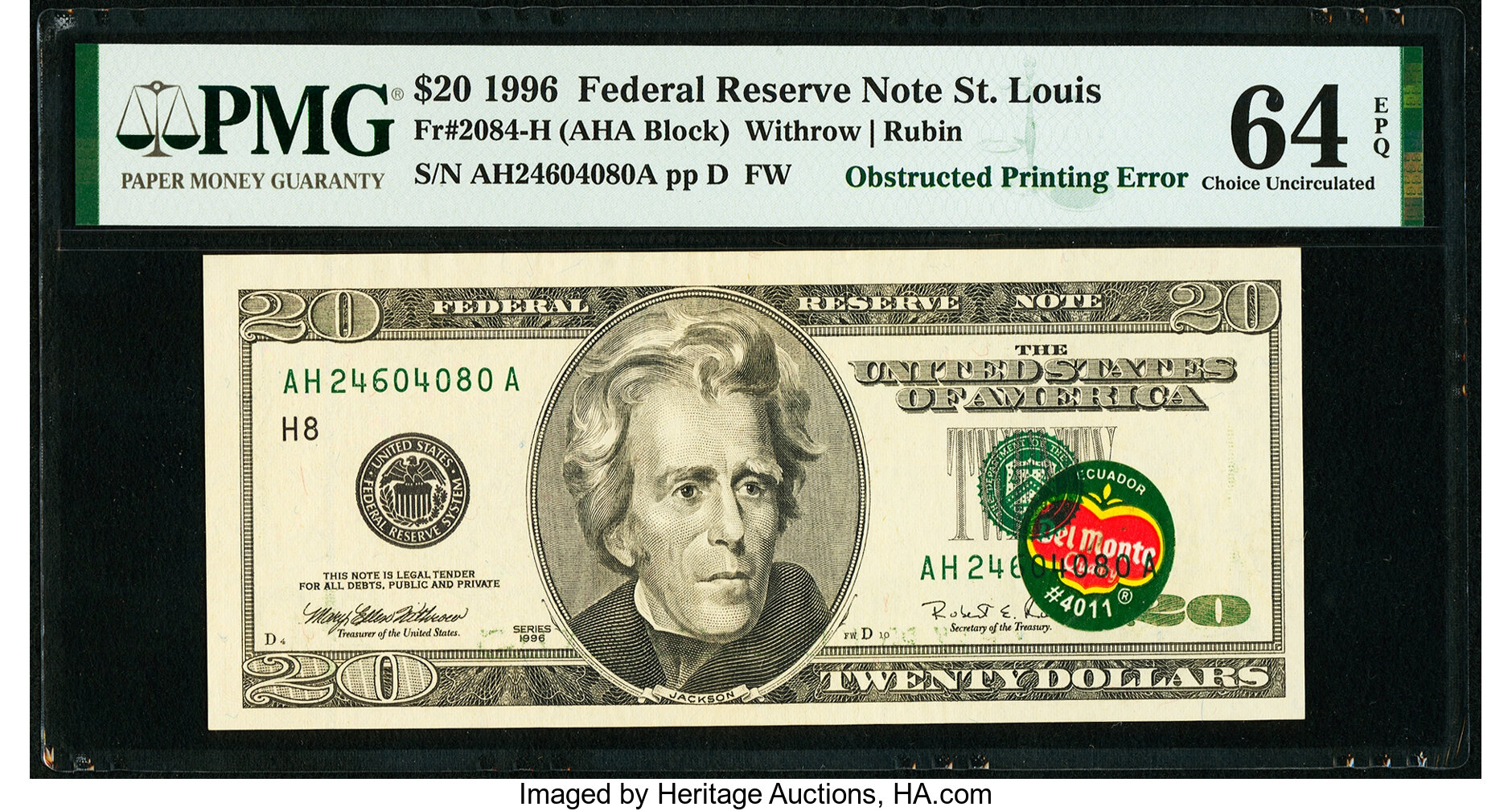 Heritage Auctions will be offering a unique and oddball $20 bill in the January Paper Money Auction #3581. This intriguing note was accidentally printed with a Del Monte banana sticker obstructing part of the design and has been nicknamed "The Del Monte Note." Most obstructions fall off shortly after printing, leaving behind a blank area of paper lacking the design, but errors with objects that "stick" to the note and enter circulation are very rare. A few objects seen on other obstruction errors include a band-aid, paper fragments, scotch tape, and wood shavings.

As our catalogers explain, United States paper money is essentially printed in three stages: the first printing is the back of the note, the second printing provides the face devices, and the final printing includes both seals and the serial numbers. When this note was printed at the Fort Worth Western Currency Facility, it went through the first and second printings normally before the Del Monte sticker found its way onto the surface. The sticker's placement is ideal, as it covers part of the second printing details and is overlaid by part of the Treasury Seal and the right serial number from the third printing.

Some have argued that this note was not truly an error or accident but rather the result of a BEP employee playing with the process. However, it was released into the economy through the regular channels of the Federal Reserve and then into regular circulation, so it is hard to say what really happened. In the summer of 2004, a college student in Ohio received it as part of an ATM withdrawal and shortly there after posted it on eBay where it sold to the highest of 12 bids. The note was a bargain at around $10,000 on eBay as news of the note had barely hit the collecting community. In subsequent weeks, it was the cover story in both Bank Note Reporter and Numismatic News. Since then it has earned a spot on the cover of the US Error Note Encyclopedia, second edition, by Stephen M. Sullivan. This fabled error is now looking for a new home, but it will take serious consideration and a very strong bid in order to bring one of the greatest paper money errors home.

Check out this very a-peeling error note here. The images are fascinating and something that you will definitely want to see (and bid on!)