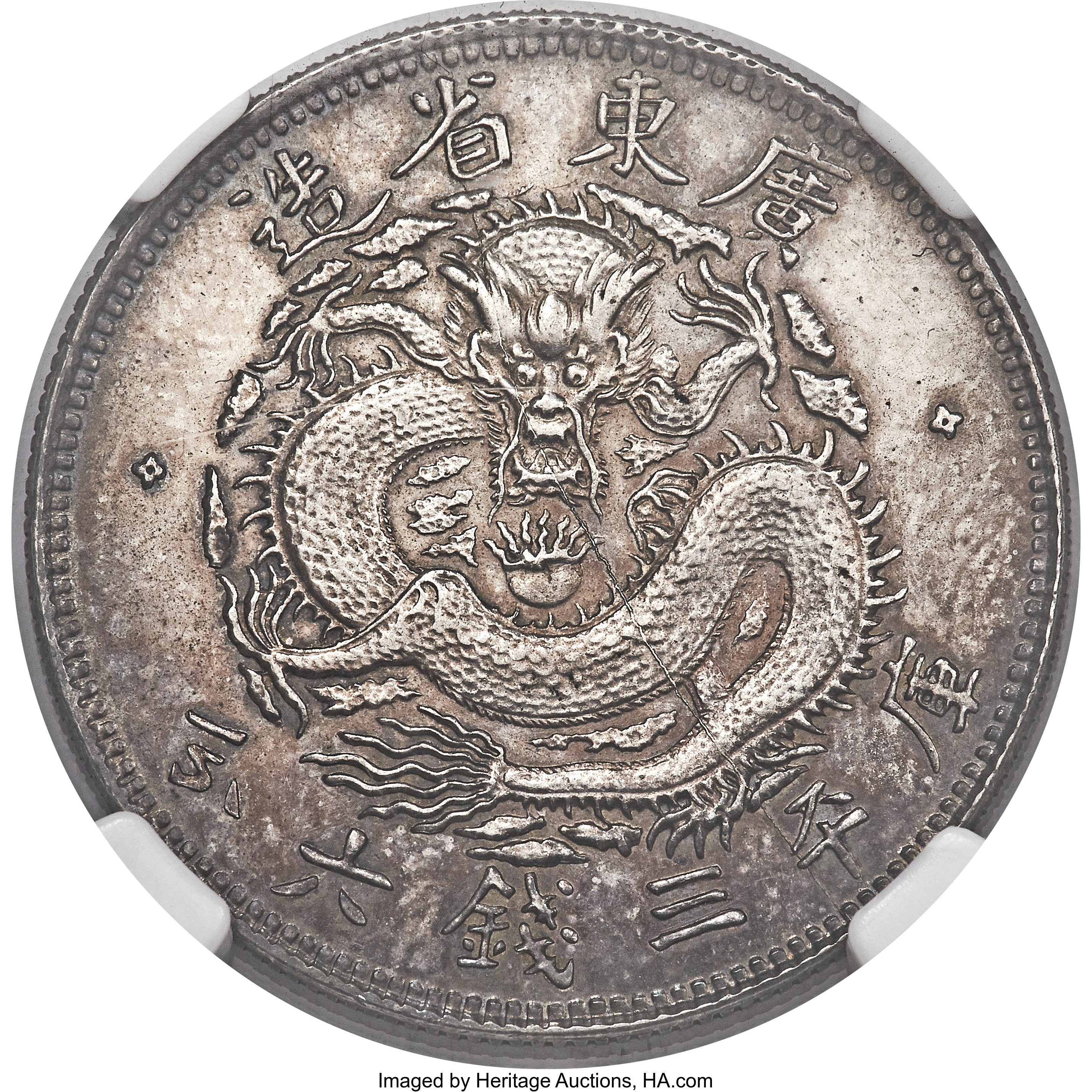 Estimated to sell for more than $150,000, the “Reversed Legends” Pattern will cross the block in one of several major auctions set for Heritage Week I Hong Kong, an inaugural series of six sales December 3-10 spanning Fine Jewelry, Watches & Fine Timepieces and Designer Handbags & Luxury Accessories.

The rare “Small Clouds” Gold Kuping Tael – a Kuang-hsü gold Pattern Kuping Tael (Liang) CD 1907, MS62 NGC, from the Tientsin mint is a shimmering gold rarity with an exacting strike (est. $90,000-$110,000). Featuring a stunning display of a dragon in the clouds, the rims are towering and well defined, acting to confirm this example for the pattern that it is, rather than as any sort of issue meant to circulate.

The even rarer Kuang-hsü gold Pattern Kuping Tael (Liang) CD 1907, MS62 NGC ($80,000-$100,000), will be offered immediately after its sister coin. The exceedingly rare Gold Pattern was struck only in tiny numbers as patterns – a unique opportunity for experienced collectors.

Among the offering of modern coins appears an anomaly: a Non-Stamped Potential “Dragon Boat” Pattern (est. $150,000-$200,000). The piece is essentially a possible “pattern” issue because large gold pieces struck in 1995 featured a serial number. This particular coin is missing a serial number, as compared to one of its counterparts, the ultra-low mintage People’s Republic gold Proof “Ancient Dragon Boat” 500 Yuan 1995 (est. $80,000-$120,000).

For the first time, Heritage Auction World Coin bidders may view NGC Modern Chinese Price Guide information for nearly all applicable coins. No other auction company in the world provides this level of depth to their clients, with this added information included on the lot page.

Heritage’s Dec. 5-7 World Currency Auction for HKINF features a stunning, National Bank of China Limited 5 Dollars 2.5.1894 KNB1a Pick 247a, a rare Hong Kong National Bank of China Limited Issue (est. $50,000-$70,000). With less than a handful of such notes known to the collecting community from this small bank, the example issued by the crown colony of Hong Kong is a rare exception from the era when the majority of banks operating during the late Empire era were either foreign or local Chinese.

One of the earliest examples of paper money from the Yuan Dynasty, a scarce Chih Yuan T’ung Hsing Pao Ch’ao 2 Kuan 1264-1341 Pick UNL S/M#C167-1, is likely to surprise most collectors (est. $40,000-$50,000). These early notes were printed on mulberry paper and charcoal dye was used for both the script and design. This historical example is well preserved, a certain highlight in any collection.