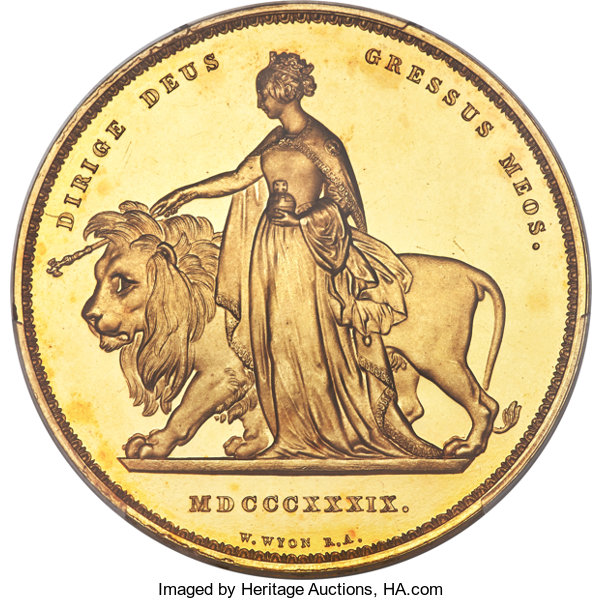 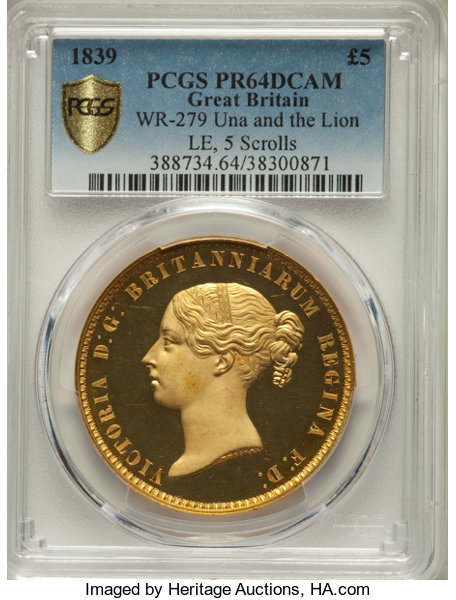 This example of the famous "Una and the Lion" 5 Pound gold proof realized $690,000 at Heritage Auctions.

DALLAS, Texas (February 3, 2020) – A 1839 5 Pound Victoria Gold Proof from Great Britain, PR64 Deep Cameo PCGS, popularly referred to as the "Una and the Lion,” [link] set a world auction record for the type when it sold for $690,000, capping total January sales of World & Ancient Coins at $17,041,022. The results were realized during the Florida United Numismatic Convention (FUN) and the New York International Numismatic Convention (NYINC). Heritage realized more than $68.8 million during the two conventions.

“The sale of the 5 pound ‘Una and the Lion’ bested the previous world record by more than $100,000,” said Cristiano Bierrenbach, Executive Vice President of International Numismatics. “We are extremely pleased with the sale results across both world and ancient offerings and many exceeded high expectations.”

The truly stellar example of one of Britain's most iconic and beautiful coins, the 1839 5 Pound Victoria Gold Proof is one of a number of varieties of the “Una and the Lion” 5 pounds coins produced over the years. However, the example on offer, with its sublime cameo contrast and minimal handling, represented a peak-quality selection of this exceedingly popular type, tying for the absolute finest of any of the varieties seen by PCGS, and with mere two examples seen finer by NGC.

A Dutch, Willem I Proof 25 Cents 1818-U, PR62 PCGS, ended at an impressive $156,000. [link]The entire mintage of this proof issue is estimated to be limited to simply a few test pieces, presuming that only a handful of examples survive today. Seldom seen at auction, the specimen exhibits a glossy, reflective surface, which has developed a handsome, aurous patina with charcoal elements at the peripheries.

An especially exceptional 1817 “Three Graces” George III silver Proof Pattern Crown, PR65 NGC, sold for $156,000 [link]. Alongside the famous 1839 Una and the Lion 5 Pounds, the 1817 Three Graces Crown represents artist William Wyon’s most celebrated piece of medallic art. “The portrait of King George is far finer on this issue and is now a key piece in one collector’s cabinet,” Bierrenbach said. 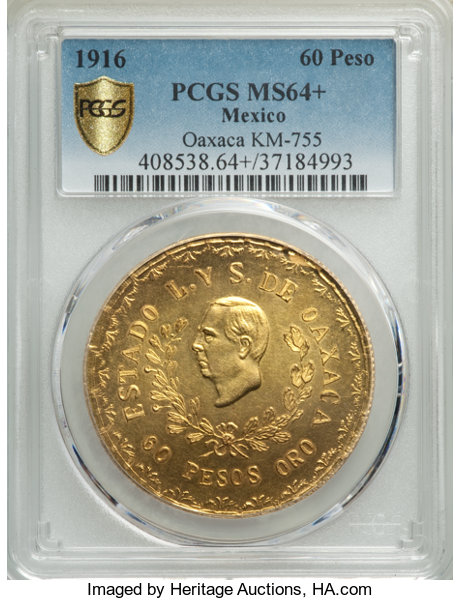 An example of a 1916 Oaxaca Revolutionary 60 Gold Pesos, an astounding representative of the Revolution's largest gold coin, sold well above expectations for $102,000 [link]. A standout during NYINC, the specimen is of Mexico's most iconic gold coinages and one whose popularity makes it almost impossible to obtain for the majority of collectors. In exquisite condition, bordering on gem, the surfaces of the example appear a perfect buttercup-yellow with velvety tone and little evidence of handling.

Of the more than 278 ancient coins offered during NYINC, top-lot honors were claimed by a Sicily Syracuse, Time of Dionysis I decadrachm, circa 405-367 BC, which sold for $132,200 [link].

The legendary year 77 Dinar – the first "Islamic" Coin – an Islamic Dynasties: Umayyad., circa 685-705 AD, AU53 NGC, sold for $96,000. It is likely the only certified example and nearly perfectly centered. The example showed only slight circulation wear, creating an extremely appealing example of this rare and historic coin.

Collectors were anxious to vie for a choice mint state “Star” Julius Caesar Aureus, NGC Choice MS★ 5/5 - 5/5, from the former Lexington Collection of Jonathan K. Kern. The coin’s crisp depiction of Caesar on the obverse, the piece is considered a simply a magnificent aureus, with perfect strike, centering, and lustrous surfaces. Well deserving of the star designation received and tied with one other for finest graded, the coin sold for $66,000. 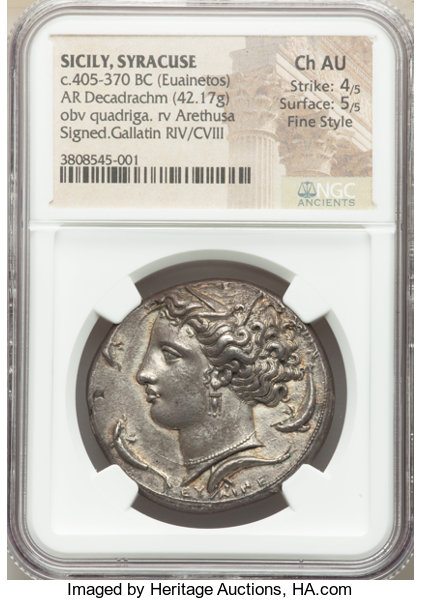 Heritage Auctions’ largest upcoming offering of World & Ancient Coins takes place April 22-27 during the Central States World Coin Convention, live in Chicago and on HA.com. During the months of February and March, private collections will be on offer, including a Special Collection of Frankfurt Coins, Feb. 9 and The El Don Diego Luna Collection, with bidding beginning approximately Feb. 23.