This exciting error note will be offered in part 1 of the Navy Commander Collection of U.S. National and Gold Banknotes on March 10, 2023.

Sacramento, CA: Today, World Banknote Auctions, the only auction firm in the United States specializing in US & World Paper Money announced the discovery of only the third National Banknote with a mismatched prefix letter. Part of the Navy Commander Collection of U.S. National and Gold Banknotes, the note is a 1929 Type 1 $10 National Banknote on Charter #200, the First National Bank of Boston, Massachusetts. The note displays serial number B011362A on the left side and serial number E011362A on the right side and has been graded Very Fine 25 by PMG.

“This is an extremely exciting discovery and the first example of such an error to come to light in many years” said Dennis Hengeveld, President of World Banknote Auctions. “Only two examples were previously known, with this example joining an extremely elusive group of mismatched prefix National Banknotes, one from the Farmers & Merchants National Bank of Fort Branch Indiana, and another from the First National Bank of Boston. This new discovery will give collectors the opportunity to acquire one of the greatest errors in the National Banknote series. It’s been almost a century since National Banknotes were last issued, and it is unlikely that many more discoveries such as this are to be made”.

This exciting error note will be offered in part 1 of the Navy Commander Collection of U.S. National and Gold Banknotes on March 10, 2023. The collection, assembled over several decades by a dedicated collector of National banknotes focuses on California, but also includes a selection of National Banknotes from around the nation. It is offered unreserved, with many of the notes seeing their first public auction appearance in at least a decade or more. 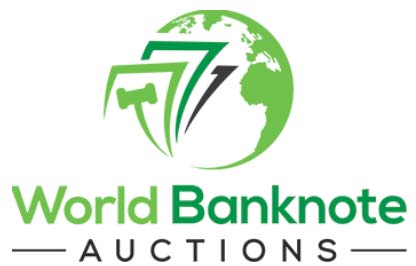 World Banknote Auctions was founded by Dennis Hengeveld and is the only auction company in the United States solely dedicated to world paper money. We are based in Sacramento, the capital of the State of California. We aim to offer exciting auctions of collectable paper money for both the beginning collector as well as the advanced specialist. Our auctions offer live bidding to attract bidders from around the world and are an exciting way to add new pieces to your collection.

We accept consignments for our auctions and in most cases offer a 0% seller’s fee along with a low 15% buyers premium and flat rate shipping rates around the world. Due to our bi-weekly format we can offer settlement in 30 days or less, compared to most auction houses where 3+ months wait is not unusual.

Dennis grew up in the Netherlands before moving to the United States in 2011 and has been involved in numismatics since the age of 8. His personal numismatic interests include banknotes of the Dutch colonies in America (Curacao, Netherlands Antilles and Suriname) and Liberty Seated Coinage of the United States. Feel free to reach out with any questions regarding our auctions or just to discuss numismatics in general. We are here for you!

World Banknote Auctions is an authorized dealer for PMG and PCGS. Dennis Hengeveld is a lifetime member of the American Numismatic Association (ANA), a member of the International Banknote Society (IBNS) and part of the Roundtable Dealer Network.