Two Chinese coins from the early 20th century sold for more than $1 million each to lead the HKINF World Coins auction to $11,229,343, and paper money added even more to the overall total. 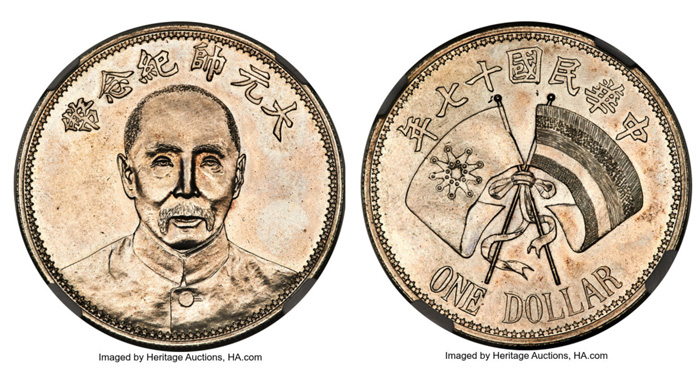 Two Chinese coins from the early 20th century sold for more than $1 million each to lead the HKINF World Coins auction to $11,229,343, and a 1949 China People's Bank of China 200 Yuan note more than doubled its pre-auction estimate when it led the World Paper Money event to $2,580,779. This represents Heritage’s most successful Hong Kong Coin & Currency auction to date, beating the firm’s prior record by over 30% in total prices realized, which was set just this past June.

The events were hugely popular, as both events generated near-perfect sell-through rates of better than 99%, both by lots sold and by value.

World Coins
More than 2,200 bidders took part in the event, in which a pair of lots produced seven-figure results.

A Republic Chang Tso-lin silver Pattern “Mukden Tiger” Dollar Year 17 (1928) MS62 NGC soared to $2,160,000 more than four times its high pre-auction estimate and the third-highest price ever paid at auction for any Chinese coin. It is the highest result ever for a Chinese coin at Heritage, and the second-highest at Heritage for any coin from outside the United States.

The first of its type ever offered at Heritage Auctions and one of just 10 examples certified across both NGC and PCGS, this magnificent example is one of those must-have coins that is arguably as famous as the man whose portrait appears on it. One of the most powerful warlords in 1920s China, Chang Tso-lin (Zhang Zuolin) was portrayed on a small series of Patterns from the silver Dollar up to a gold 50 Dollar piece produced during his short-lived hold over Beijing and Tientsin from 1926 to 1928. His coins remain some of the rarest and most highly sought after of all Republican issues, numerous examples of which have been known to have set all-time price records when they came to auction.

A Hsüan-t'ung silver Proof Pattern “Long-Whiskered Dragon” Dollar Year 3 (1911) PR63 NGC also soared past its estimate, finishing at $1,200,000. Among the most famous Patterns from the end of the Qing Dynasty, the so-called “Long-Whiskered” Dragon Dollars from 1911 represent what is perhaps the culmination of late Imperial art as expressed in a numismatic medium. The product of famed Central Mint engraver Luigi Giorgi, who also created many of the most famed designs of the early Republic, it represented a program on the part of the Emperor to unify the national currency, formally abolish the disparate standards of the different provinces, and finally supplant the circulation of foreign silver Dollars that had so long frustrated central Chinese monetary policy.

“As I was watching our auction, witnessing the stunning amount of bidding action and prices soaring, I couldn’t help but smile,” Heritage Auctions Executive Vice President of International Numismatics Cristiano Bierrenbach said. “It brings our team tremendous happiness and sense of accomplishment to realize such incredible results for our consignors, some of which are life-changing. The Chinese markets are soaring to heights that are eclipsing the growth last bull market of 2010 and 2011 particularly for vintage coins.”

Once a part of the R.N.J. Wright Collection, a Kweichow. Republic “Bamboo” Dollar Year 38 (1949) XF45 PCGS drew nearly three dozen bids before finishing at $810,000, well above its pre-auction estimate. This coin is from the significantly rarer of the only two Dollar-sized issues produced in the province. The so-called “Bamboo” Dollar represents one of the final types produced prior to the Communist victory in October 1949.

A spectacular 180mm People's Republic gold Proof “Year of the Sheep” 100000 Yuan (10 Kilo) 2015 brought a winning bid of $615,000. Coins of such extraordinary aesthetic appeal and size rarely make it to market, making this a prized rarity. This example belongs to the lunar series, remains one of the most coveted in modern Chinese numismatics since its inception in 1981. Struck to commemorate the Year of the Sheep/Goat, this fantastic 10-kilogram offering, approximately 22 pounds of 99.9% pure gold.

An exceptionally rare Republic Sun Yat-sen silver Specimen Pattern Dollar Year 26 (1937)-S SP63 PCGS brought in 39 bids before it reached $480,000 – eight times its pre-auction upper estimate. This beauty is from a pattern so scarce that it is missing from many famous collections, including Goodman, Jacobs and Wa She Wong. Few specimens have made it to auction over the last several decades; this example is one of five known to Heritage Auctions experts. It is one of just two certified at PCGS, with none yet at NGC.

An extremely rare China People’s Bank of China 200 Yuan 1949 Pick 837a2 S/M#C282-51 PMG Superb Gem Unc 67 EPQ – the finest-graded example in the PMG Population Report, closed at $66,000 to lead the World Paper Money event. The note is from one of six 200 Yuan notes prepared for issue throughout China. The offered note is the first example graded Superb Gem Uncirculated, and as such, the first and best available.

“World Banknotes have been trending up at Heritage, in large part because of East Asian notes like this 200 Yuan note,” Heritage Auctions Vice President Dustin Johnston said. “This magnificent note finished at the top of an exceptional selection of Asian notes, an indication that the market realizes the true rarity of these notes. They were central to China’s growth and heavily used with few survivors in these grades.”

Close behind was a China People's Bank of China 5000 Yuan 1953 Pick 859b S/M#C282 PMG Choice Uncirculated 64 EPQ , which drew a dozen bids before finishing at $60,000 – six times its pre-auction estimate. This well-preserved specimen shares the third-finest grade in the PMG Population Report. The 5000 Yuan is the first issued note from the 1953 dated series, which only was in circulation for about two years before being withdrawn from the public in 1955.

A People's Bank of China 50 Yuan 1949 Pick 830a S/M#C282-36 PMG Gem Uncirculated 65 EPQ sparked a flurry of bids before ending at $50,400 – more than 12 times its pre-auction estimate. One of the most iconic notes of the first series, this design was said to have been adapted from an earlier 10 Yuan denomination, which also featured a farmer and worker.

An enormous Malaya and British Borneo Board of Commissioners of Currency 1000 Dollars 21.3.1953 Pick 6a B106 KNB6a PMG Extremely Fine 40 , from the Luminous Slamstone Collection, reached $49,200. This $1,000 note is the highest denomination that could have been obtained and used by the public from a new currency system that was created for all British Colonies after King George VI died in 1952. At the time of circulation, this denomination was roughly exchangeable for 100 British Pounds, making it one of the highest denomination circulating notes at that time. Extant notes in issued form are very rare; most are held in institutional or other famous collections. Heritage has offered a Specimen of this denomination in the past, but never in fully issued form. One of the British Commonwealth's most iconic and rare notes, this is one of the key Queen Elizabeth II portrait notes.

A People's Bank of China 100 Yuan 1949 Pick 835a S/M#C282 PMG Gem Uncirculated 65 EPQ prompted more than a dozen bids before it more than doubled its pre-auction estimate at $48,000. The first denomination of the series also is arguably the second-rarest. While there are multiple designs for the other denominations of the series, the 100 Yuan only has this design, with Chinese sailing ships at front.

Other top World Paper Money notes included, but were not limited to: