The World’s Fair of Money came to Heritage Auctions over the last several days, and, appropriately, it was an extraordinary thrill ride as numerous world records were set on the way to a $68,776,095 auction total. 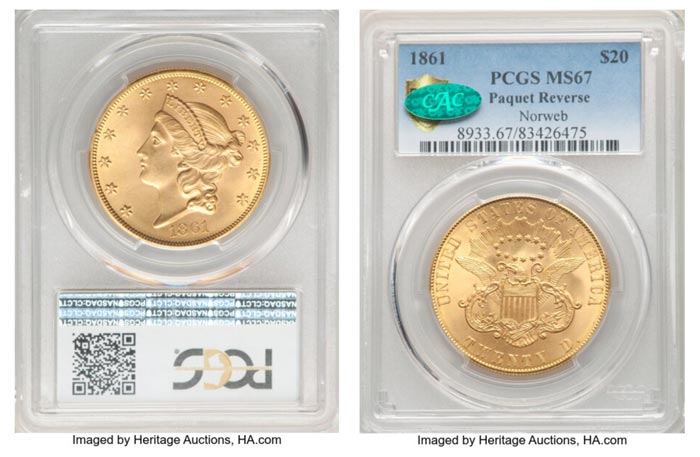 DALLAS, Texas (August 24, 2021) – The World’s Fair of Money came to Heritage Auctions over the last several days, and, appropriately, it was an extraordinary thrill ride as numerous world records were set on the way to a $68,776,095 auction total.

“We saw some really powerful bidding for trophy pieces from our collector clients” Heritage Auctions Executive Vice President Todd Imhof said. “We always feel honored when top connoisseurs entrust us with items from their incredible collections and its doubly rewarding when we deliver such strong results for them.”

U.S. Coins
The fireworks started on the event’s first day when a 1861 Paquet Double Eagle, MS67, CAC drew 75 bids before selling for $7.2 million, the highest price ever paid for a U.S. $20 Liberty gold coin, which is one of the rarest coins in American numismatics. The issue has been an extraordinary rarity since the day it was struck, and just two examples are known to remain in existence.

A 1794 Flowing Hair Silver Dollar, MS66+ , considered the finest surviving representative of the mintage, also sparked furious competition, as 54 bids poured in before it closed at $6.6 million – a world record for a regular-issue silver dollar. This example, from the collection of Bob R. Simpson, is one of just 135-150 believed to remain in existence. Some pieces were reserved as samples, an idea supported by the fact that just a handful of 1794 silver dollars remain in Mint State, plus one Specimen strike. 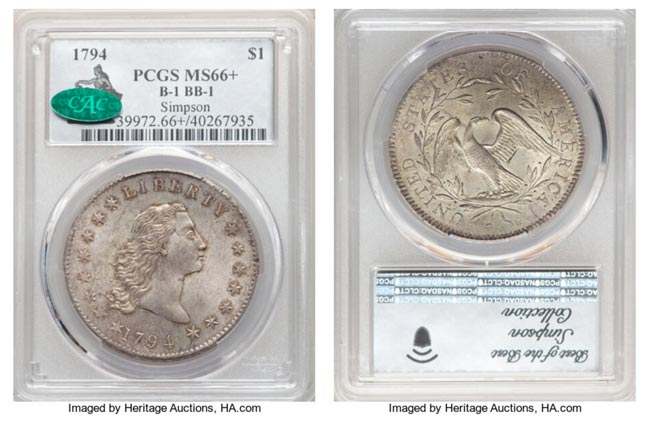 Nearly three dozen bids poured in for an 1854-S Liberty Half Eagle, XF45 until it reached $2.4 million, another world record. A rare coin since the day it was struck, the 1854-S Liberty half eagle is a regular-issue coin that owes its elusive nature to its microscopic mintage of just 268 examples, of which just four are known to survive … and one of those is housed in the National Numismatic Collection at the Smithsonian.

An 1878 $10 Ten Dollars, Judd-1581, Pollock-1774, R.8, PR66 Deep Cameo PCGS fetched 75 bids before it finished at $810,000, an auction record for this pattern. This is the only privately owned example of one of the rarest issues in the U.S. pattern series. Only two examples were struck in 1878; the other has been in the collection of the Connecticut State Library for more than a century.

Other notable U.S. Coins results included, but were not limited to:

World Coins
A Victoria gold Proof “Una and the Lion” 5 Pounds 1839 PR66★ Ultra Cameo NGC sold for $1,440,000, the most ever paid for the type and the second-most ever paid for a British coin at auction. Boasting great popularity and scarcity, the Una and the Lion 5 Pounds of William Wyon was designed exclusively for inclusion in Victoria’s delayed 1839 Proof Set. Only about 400 were originally minted, but soaring demand dictated that the Royal Mint had to produce to-order examples for nearly 50 years, until 1886. 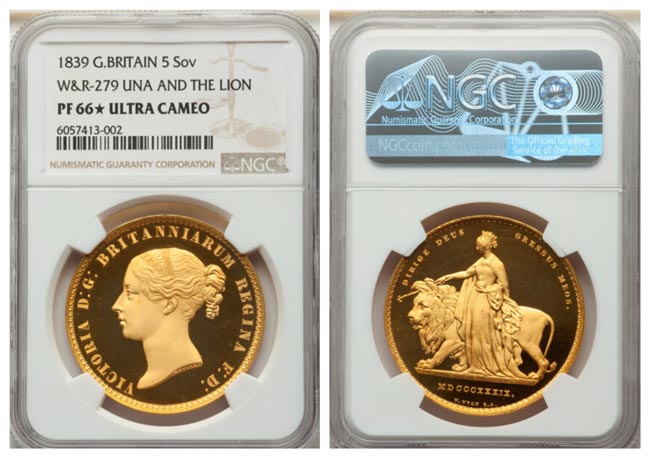 A Marcus Junius Brutus, Assassin of Caesar and Imperator (44-42 BC). AR denarius (18mm, 3.61 gm, 12h). NGC XF 4/5 - 3/5, bankers mark, test cut , drew a winning bid of $312,000. From the WTR Collection, the EID MAR denarius is widely considered the most historically important ancient coin. It is the only Roman coin to mention a specific date, and the only Roman coin to openly celebrate the act of murder. The final result was the most paid for any Roman silver coin in 2021.

Other top World Coins in the event included, but were not limited to: