A 1937 Edward VIII 5 Pounds Pattern coin – one of only a small number of commemorative British gold coins produced for the would-be coronation of Edward VIII – set a world record as the most expensive British coin when it sold for $2,280,000 during a public auction of rare world coins held by Heritage Auctions on Friday, March 26. 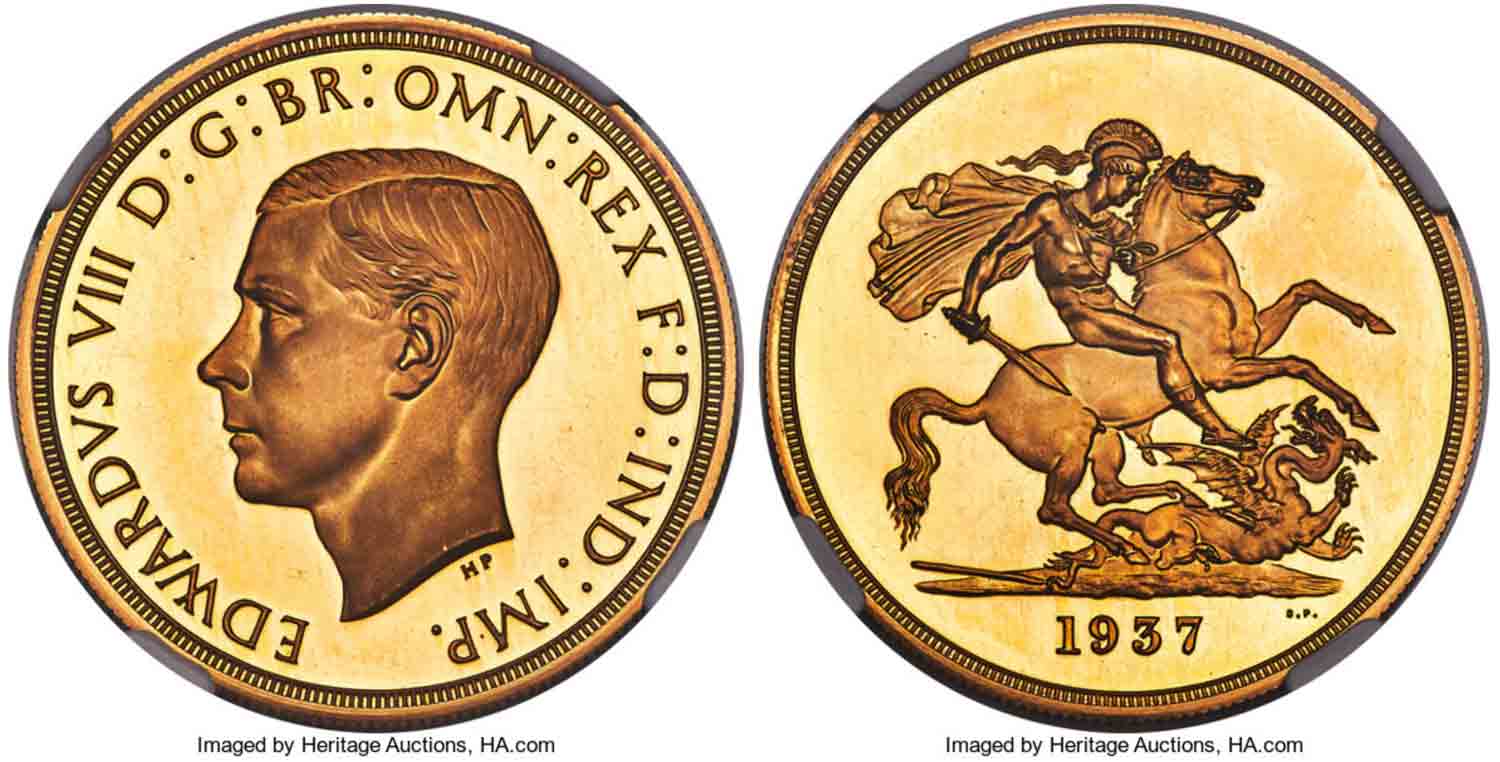 DALLAS, Texas (March 26, 2021) – A 1937 Edward VIII 5 Pounds Pattern coin – one of only a small number of commemorative British gold coins produced for the would-be coronation of Edward VIII – set a world record as the most expensive British coin when it sold for $2,280,000 during a public auction of rare world coins held by Heritage Auctions on Friday, March 26.

Both rarity and condition contributed to its record setting auction price, according to Cristiano Bierrenbach, Executive Vice President of International Numismatics at Heritage Auctions.

“The gold Edward VIII 5 Pound is one of the greatest prizes in British numismatics,” Bierrenbach said. “Uncompromising in terms of its beauty and quality, this coin is one of less than a half dozen believed to be in private hands.”

The previous record for the most expensive British coin sold at auction was for a William IV proof 5 Pounds from 1831, which sold in Monaco in October 2020 for a hammer price of 820,000 euros.

Despite extensive plans that were made for the production of coronation sets for distribution to collectors and important persons, Edward VIII's coinage was ultimately cut short by his decision to abdicate the throne to marry Wallis Simpson, a commoner and yet the woman he loved, after just 10-1/2 months of rule.

Reports from 1935 to 1936 show that more than 200 dies for coins, medals and seals were prepared and then ultimately destroyed after Edward's fateful decision. Edward was no stranger to taking steps that flew in the face of what was conceived at the time as “conventional.” His style of dress and mannerisms were considered “simple” and “frank,” much to the delight of the common people and in opposition to what could have been called kingly or royal.

“The coinage that was struck was confined to a series of special-purpose coins intended for collectors and dignitaries and the like, rather than issues for general use,” Bierrenbach said. “To the best of our knowledge, not a single example of the Edward VIII 5 Pounds has come to auction in at least the past 20 years, if not longer.”

A surviving letter exchanged between the Duke of Windsor and his brother, George VI, reveals that even Edward himself was denied his request to obtain a surviving coronation set for himself.

“It’s fitting to state that this is the coin that even a ‘king’ couldn't have,” Bierrenbach said.

The coin was sold as part of The Paramount Collection, a grouping of more than 700 world coins widely considered the finest ever offered at auction in at least a generation.