Previously owned by King Farouk of Egypt and shoe designer Stuart Weitzman, the famed 1933 Saint will be publicly exhibited for four days at the ANA Show. 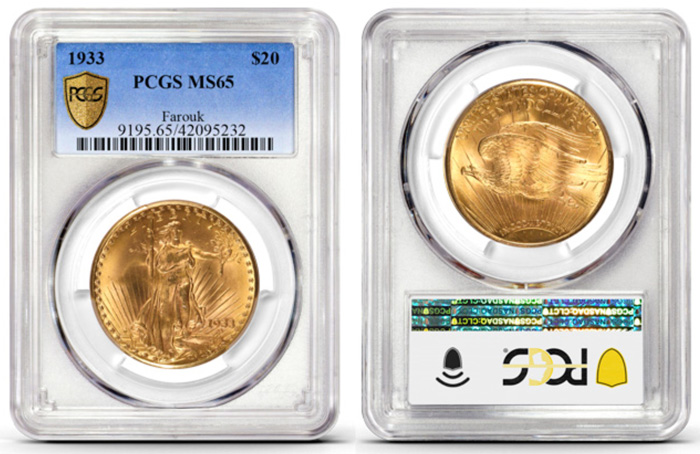 The world's most valuable and famous rare coin, the 1933 Double Eagle previously owned by King Farouk of Egypt and shoe designer Stuart Weitzman, will be publicly exhibited for four days at the American Numismatic Association's Chicago World's Fair of Money (www.WorldsFairOfMoney.com), Tuesday through Friday, August 10-13. This will be the historic gold coin's first public display anywhere since it was sold at auction in early June for a record-breaking $18,872,250.

"The new owner told me that when this coin was first sold at auction in 2002 for a then-record-breaking $7.5 million, he was determined to one day own it. Nineteen years later, he fulfilled his dream. Now, after weeks of confidential meticulous planning and security arrangements, he graciously will be sharing it for the public to see in person at the Chicago World's Fair of Money," said Ian Russell, president of GreatCollections Coin Auction (www.GreatCollections.com) and exclusive consultant to the coin's owner.

"We were absolutely surprised and ecstatic to be able to include this coin as a featured attraction at the upcoming Chicago World's Fair of Money. This is a legendary coin, and we are honored that its new owner and GreatCollections are exhibiting it first at the ANA convention," said Kim Kiick, ANA executive director.

The Chicago World's Fair of Money will be open to the public in Hall A of the Donald E. Stephens Convention Center in the Chicago suburb of Rosemont, Illinois, August 10-14. The acclaimed 1933 Double Eagle will be displayed at the GreatCollections booth, #400, for the first four days of the five-day show.

United States $20 denomination gold coins (Double Eagles), specially designed by acclaimed sculptor Augustus Saint-Gaudens at the request of President Theodore Roosevelt, were struck from 1907 to 1933. Collectors often refer to them as "Saints" in recognition of their designer.

Although United States Mint records indicate 445,500 Double Eagles were struck in 1933, only one with that date is lawfully permitted for private ownership.

In April 1933, during the Depression, President Franklin D. Roosevelt issued an executive order "forbidding the hoarding of gold coin, gold bullion, and gold certificates within the continental United States" with limited exceptions. A State Department export license was granted in 1944 for one 1933-dated Double Eagle so it could be owned by King Farouk of Egypt. This is the same coin that will be displayed. Two other 1933 Double Eagles are in the National Numismatic Collection of the Smithsonian Institution.

Public admission Tuesday through Friday is $10 daily or $25 for a three-day pass. Children 12 and under are admitted free daily and admission is free for everyone on Saturday.