As part of the offerings in their Central States Auction in April, Heritage Auctions has a beautiful 1908 $10 matte proof Indian gold eagle graded PCGS PR66 with the elusive Gold CAC sticker. 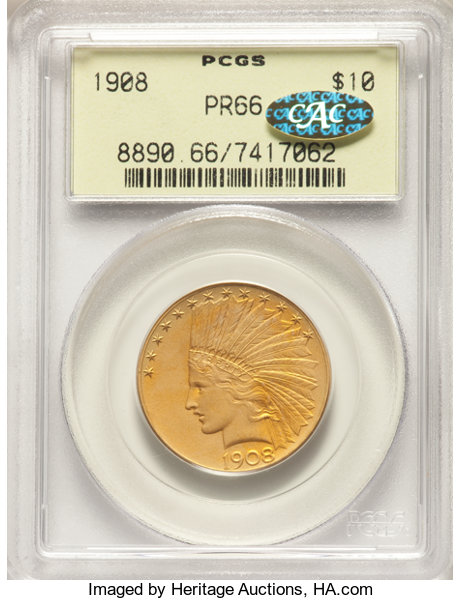 This beautiful 1908 matte proof eagle is graded PCGS PR66 with a gold CAC sticker. It will be auctioned in May 2020 during the Heritage CSNS Platinum Night.

A Proof Gold coin with only 116 distributed examples is scarce by its nature. But for such a Proof to survive in Proof 66 condition by PCGS, in an old green label holder, and to later receive the coveted and uncommon Gold CAC sticker indicating that the piece is undergraded is even rarer. This "solid gold" example of a collector coin should bring significant attention when it comes up for bid in Heritage Auctions' April Central States sale.

"The Philadelphia Mint issued Indian proofs for collectors for the first time in 1908, but adjustments to the finish had to be made because of the new design. The Mint found it impossible to polish the proof dies for the new gold coin designs to produce the popular brilliant finish of earlier proofs. Instead, they opted for a dull sandblast finish, in which the planchet was struck from specially prepared dies and then sandblasted with a coarse grain of sand while being held in a glove. The resulting finish had an artistic matte appearance, like that seen on some medals of the period.

Anticipating intense collector demand for the proofs, because of the novelty of the design, the Mint struck an ambitious production of 500 proof eagles in 1908. Unfortunately, collectors preferred the old brilliant proofs of prior years, and orders were slow to come in after the initial rush. Only 116 specimens were distributed by December 30, with the rest melted after the end of the year. John Dannreuther estimates the surviving population at 70-80 examples in all grades.

This spectacular Premium Gem proof exhibits the dark orange-gold patina typical of the issue. The virtually flawless surfaces show a couple of shiny spots in the headdress feathers and a faint amber alloy spot above the D in DOLLAR on the reverse. The design elements are sharply detailed throughout, with fine definition on Liberty's curls and the eagle's feathers. The exceptional quality and eye appeal of this stunning proof is attested by the seldom-awarded Gold CAC sticker. We expect intense competition from series specialists when this lot is called. Housed in a green label holder."

Similar coins have sold for around $70,000 in the past, so this lot will be a highlight of the April Platinum Night sale. Check it out here [link].