Class I 1804 Dollar Hitting the Block in June

A gorgeous proof example of the legendary 1804 Draped Bust dollar will be up for bids during a June 14-17 Heritage Auctions event, and many folks are gearing up for wha 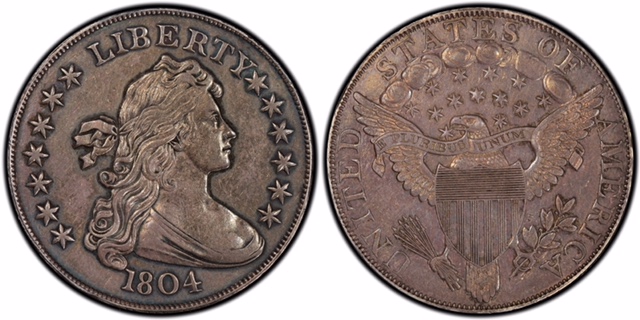 Class I 1804 Dollar Hitting the Block in June

A gorgeous proof example of the legendary 1804 Draped Bust dollar will be up for bids during a June 14-17 Heritage Auctions event, and many folks are gearing up for what could be an exciting seven-figure transaction. The 1804 dollar, known as “The King of American Coins,” is one of the most famous coins in all of numismatics and is among the rarest of rarities.

There are only 15 known specimens, and just eight of these are original Class I specimens, one of which will be offered by Heritage during the sale at the Long Beach Coin, Currency, Stamp & Sports Collectible Expo. The Mickley-Hawn-Queller dollar, graded PR62 by Professional Coin Grading Service (PCGS), has an illustrious provenance that connects the coin to various luminaries from the worlds of numismatics, industry, and finance. “This one certainly will become the highlight of its next proud owner’s collection,” said PCGS President Don Willis.

The Class I 1804 dollar was actually struck in 1834 and was included in specially prepared proof sets that were delivered to foreign heads of state as diplomatic gifts. Class II and Class III 1804 dollars are rare restrikes that were made after 1857. While Class I dollars are known as “originals” and Class II and Class III pieces are commonly referred to as “restrikes” in numismatic nomenclature, both of those terms are technically inaccurate as no 1804-dated dollars were struck in 1804. This means there are no true “originals” and thus no “restrikes.”

At one time, the 1804 dollar was the world’s most valuable coin with plenty of hard data to back that claim up. For example, in the 1880s another Class I 1804 dollar – the Dexter specimen – became the first coin known to ever cross the $1,000 threshold. The Stickney specimen traded for $3,600 in 1907, becoming the most valuable coin sold during that decade. By the 1960s, the 1804 dollar was breaking records with five-figure hammer prices, and by the late 1980s smashed records in the high six-figure territory. In 1999, a PR68 Class I 1804 dollar once owned by the Sultan of Muscat and known as the finest example of the coin scored a record $4,140,000 and, to date, remains the highest price ever paid for the 1804 dollar.

The 1804 dollar relinquished top honors three years later when a 1933 double eagle captured $7,590,020 becoming the world’s most expensive coin for more than a decade. It would take an ambitious eight-figure bid to again make the 1804 dollar the world’s most valuable coin. Notably, the Sultan of Muscat 1804 dollar came up for auction again in 2015 at a Stack’s Bowers Auction (held in conjunction with Sotheby’s) but did not sell – apparently, even a reported phone bid of $10 million did not eclipse the unannounced reserve.

While there is little chance the upcoming June sale of the Mickley-Hawn-Queller specimen will re-cement the 1804 dollar as the world’s most valuable coin, it is virtually certain to hammer somewhere in the middle seven figures. Could it surpass the $4.14 million paid for the Sultan of Muscat specimen in 1999? That is possible, but only time will tell.

Also on the Block…

The 1804 dollar is sure to generate interest even from non-numismatic media sources, but the famous silver dollar will be sharing the spotlight with several other rarities. These include a 1793 PCGS/CAC MS65BN Chain AMERICA with Period large cent, a 1794 PCGS/CAC XF40 Flowing Hair, and 1907 PCGS/CAC MS67 Saint-Gaudens double eagle that Heritage officials describe as “an amazing coin” with surfaces that “are essentially perfect – the satiny mint luster glows.”