What would you do if you found an extremely rare 1848 proof Liberty Seated dime in a lot of otherwise ordinary coins you just bought on eBay? If you’re Sam Shafer, a 30-year-old vest pocket coin dealer in Fishers, Indiana, you jump for joy! 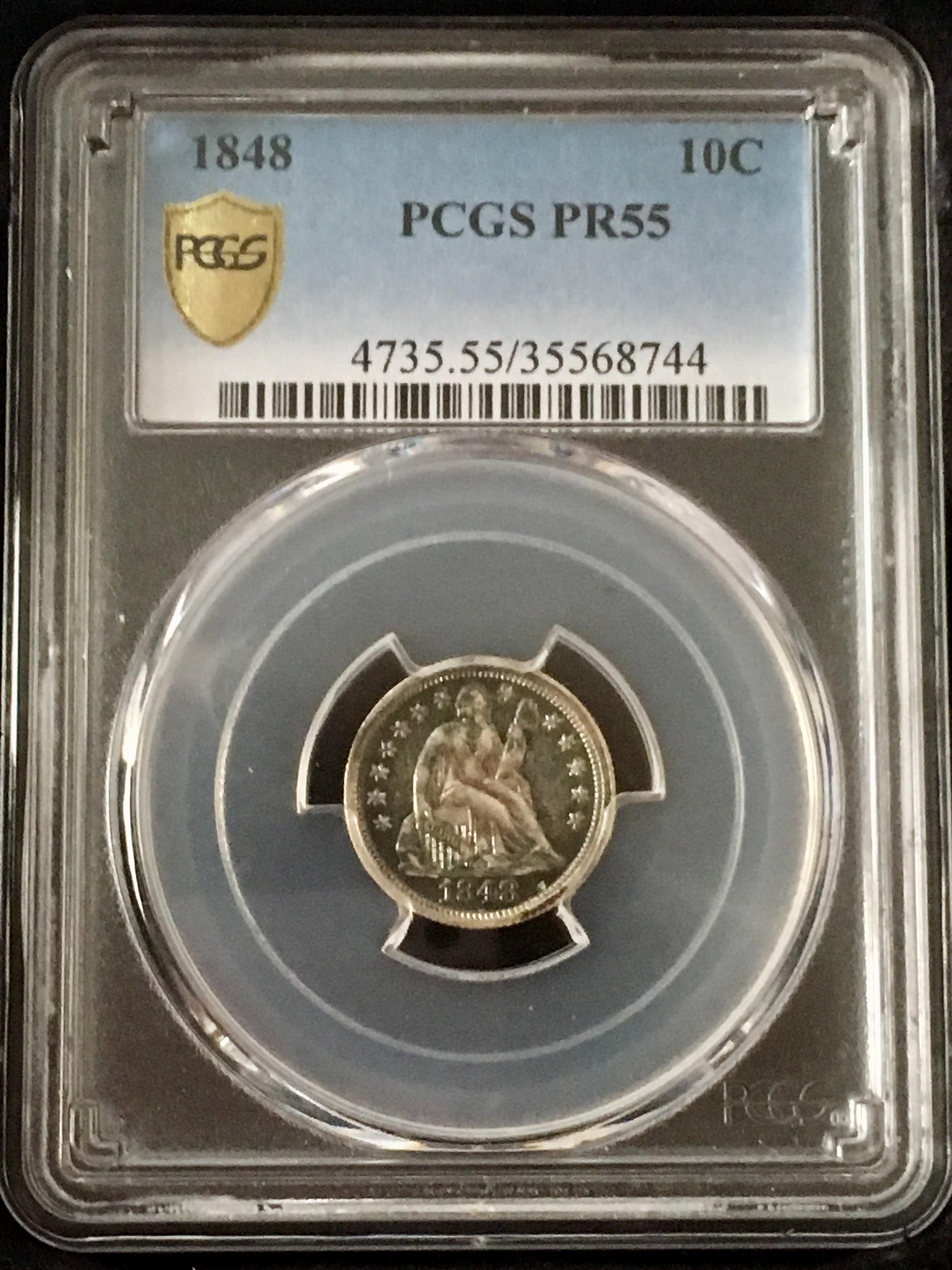 What would you do if you found an extremely rare 1848 proof Liberty Seated dime in a lot of otherwise ordinary coins you just bought on eBay? If you’re Sam Shafer, a 30-year-old vest pocket coin dealer in Fishers, Indiana, you jump for joy! Shafer, who shares his love for the hobby with friends and those who visit Gold and Coin of Fishers, finds buying coins on eBay a profitable way to acquire coins for his business. But he never dreamed his periodic eBay purchases would uncover a rare 1848 proof dime, which had a tiny mintage of merely 10 pieces and has only eight known surviving specimens, all struck from a single pair of dies.

The Philadelphia business-strike 1848 dime, itself a better date, had a mintage of just 451,500 pieces, and it was with that knowledge that Shafer made a move to buy for $100 what he thought was a nice yet otherwise ordinary example of the Hard Times-era Philly dime. But it wasn’t until the 1848 dime arrived in his hands a few days later that the real discovery began.

The coin will be auctioned this week on a Facebook numismatic retail group called The Virtual Coin Show on Facebook. While the lightly circulated 1848 proof dime probably won’t beat the record price for the issue – a princely sum of $39,100 paid in 2008 for an NGC PF66 specimen sold at a Heritage Auctions event – it is likely to flirt with, and possibly enter, five-figure territory.

Shafer was kind enough to share a few minutes for an interview so he could tell in his own words how he made his once-in-a-lifetime discovery:

Q. In what type of purchase did you find this 1848 proof dime?

A. I purchased about eight to 10 coins from the same seller. It appeared to be part of a collection that was being sold. I was simply going through and making offers on the coins based on [prices listed in] the Greysheet.

A. I was immediately struck by the fact that the coin had a hint of cameo contrast. It was very distinctive to me and did not look like the phony cameo that is sometimes caused by cleaning. I was also surprised by how well the coin was struck. Most Seated dimes from the hard times era have mushiness or strike issues of some kind. This coin, despite wear, was incredibly sharp in all aspects.

Q. What are some of the die markers that clicked with this being something other than a business strike?

A. My heart started to pound when I saw that the obverse die of the proof had a repunched “1” in the date. I had examined my coin briefly with a loupe, and I had noticed that my coin also shared this distinctive marker. Further examination showed die chips near the stars as well as a lack of any type of die cracks or scratches which are unique to the mint state dies. Taking all things into consideration I began to feel that this could be the real thing.

Q. How did you feel once you felt you had confirmed this was a proof coin?

A. I was elated! But at the same time very cautious, because I knew I had to get a third-party grader (TPG) to reach the same conclusion. The moment that it really hit was when I emailed [Seated Liberty dealer and expert] Gerry Fortin pictures of the coin, and he replied that my coin was indeed F-103 (the proof die) and he offered his congratulations. I knew at that point it was simply a matter of getting it through certification. Professional Coin Grading Service (PCGS) called in their proof coinage expert and after thorough examination they agreed it was a proof. When I received an email from PCGS that they graded the coin a proof I literally jumped out of my chair and yelled ‘YES!!!!!!!’ out loud in quite the same fashion as I might do when my team (the Indianapolis Colts) score a game-winning touchdown!

Q. What grade did PCGS award your 1848 proof dime?

A. This coin is without a doubt lightly circulated. PCGS determined the grade is a PR55, which I feel is dead-on accurate for the strike type. It is absolutely mind blowing to me that this coin circulated, or at least was carried as a pocket piece for a short time. In the 1840s proof sets were only made for and purchased by wealthy or important people. This reminds me of the 1894-S Barber dime [mintage of just 24 pieces] that was allegedly spent on ice cream. It is very possible this coin also had a similar fate. The mysterious nature of this piece is certainly a big part of its allure.

Q. How much do you think your 1848 proof dime will fetch?

A. I am hopeful that the coin will bring somewhere between $8,000 and $10,000. The Louis Eliasberg example, which is a PR65, makes the rounds in the auction world with some regularity and it fetches around $15,000. Although my coin has personality, I don’t think it will be in the same league as the Eliasberg coin.

Q. Any words of wisdom for others hoping to make similar finds?

A. I think cherrypicking is all about knowledge and curiosity. The more you know, the more likely you will be able to identify anomalies. The best way to build that knowledge is to constantly be curious. That involves spending the time reading about coins and studying them. A fellow dealer once told me that there is at least one coin to be cherrypicked at every dealer’s table, and it’s the responsibility of the individual to find that coin. I really believe that is true. No matter where you are shopping there are deals to be found. And sometimes the deals may fall into your lap (as was the case with this dime), it’s just a matter of having a knowledge base to work from. This hobby is all about learning… The people who take the time to do that will find the deals.