CDN Editor, Patrick Ian Perez, lays out his thoughts on new auction records being set in the rare coin market and the disconnect between spot metal prices and the physical demand. 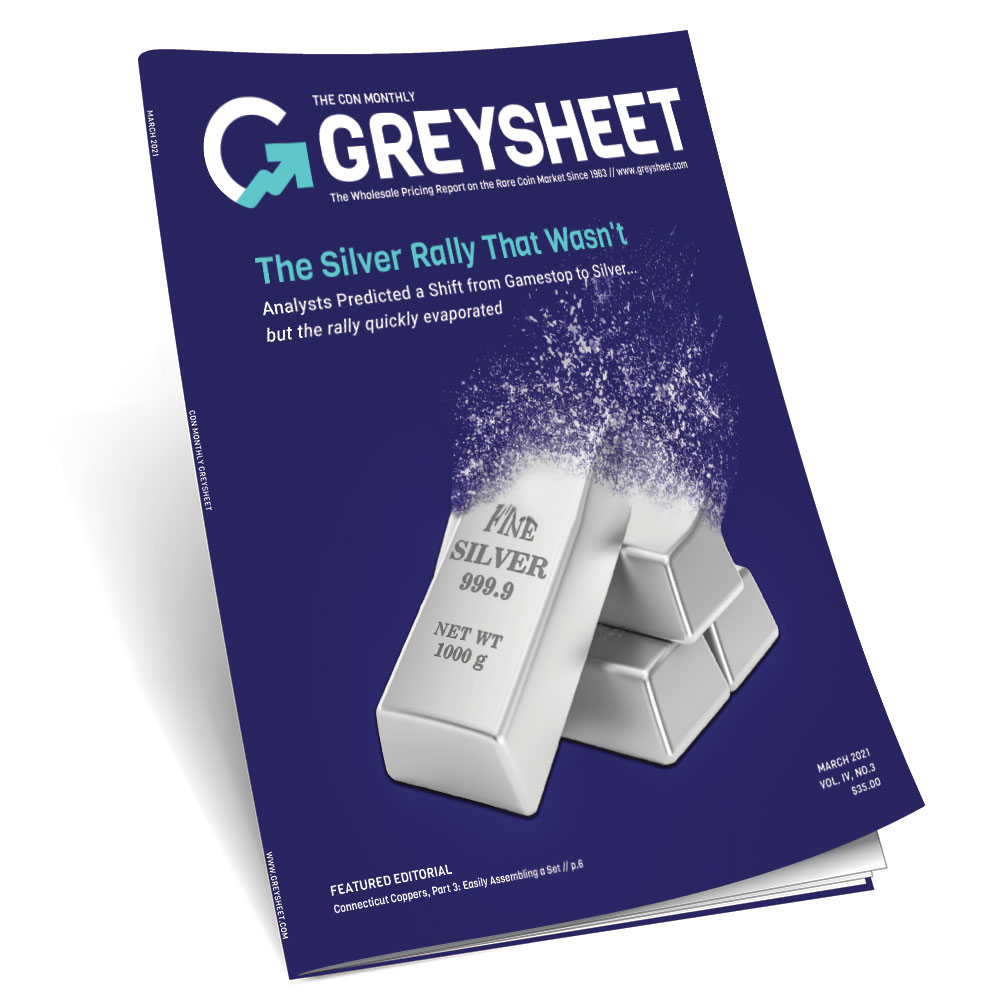 The cover of the March 2021 Monthly Greysheet magazine

The cover of the March 2021 Monthly Greysheet magazine

Being a keen observer of both the collectibles market and the wider equity markets over the past five weeks has been fascinating. Storylines abound. In January, nearly $100 million of coins and currency were sold via auction across multiple venues and companies, including U.S. coins and currency along with paper money. The Heritage Fun U.S. coin sale on its own accounted for $63.38 million, highlighted of course by the Brasher Doubloon at $9.36 million, setting the record for the most expensive gold coin ever sold at auction. While I was personally hoping it would crack the $10 million mark, it is an impressive result nonetheless.

Overall, six U.S. coins sold for more than $1 million and many records were set. With a total of 2,268 lots sold, the FUN sale came in with a per lot average of a very strong $27,949. With still no major on the immediate horizon, where does the market sit? It is easy to say the market for quality rare coins is strong. Coins are finding new homes with relative ease and, surprisingly to some, the strength is closer to being top-to-bottom in the market than it has been in a long time.

I would argue that it’s not so much that rare coins are suddenly worth so much more than they were 12 months ago, but rather there is less and less confidence in the U.S. dollar. Additionally, holding cash savings accounts and traditional bonds is now penalizing. Nearly 80% of the sovereign bonds on this planet are yielding less than 1%. As this sentiment has grown, cash has flowed to many alternate stores of wealth, collectible coins being one of them. This also leads, more fundamentally, precious metals.

In my February column, I wrote about the higher forecasts many institutional analysts have for gold, and while the yellow metal has remained rangebound since then and has not made any major moves, it has been silver in the spotlight. The spot silver price has endured major volatility recently, with moves higher followed by selloffs. Over the weekend of January 30th and 31st the silver bullion market supply essentially disappeared. Numerous online bullion dealers posted messages on their website stating they were either out of supply or not taking additional orders in anticipation of lack of supply. Less than a week on, however, there was inventory but at much higher premiums. The supply crunch was sparked by a rare occurrence. No doubt most people in America are aware of the GameStop (GME) situation, which by the time the ink is dry on this magazine could be ancient history, at least the minute details. The effects will still be felt, however. The same participants involved in GME turned their attention to the paper silver market and caused the aforementioned volatility. While they were not successful in sending the silver price to the moon, there are some positive aspects that could come out of it. A large swath of mostly young investors who were not aware of the precious market got some exposure and began to understand the major disconnect between the paper market that sets the “spot” price and the physical market which is the real acquisition cost. Many also realized how little gold and silver really exists in the grand scheme of things. These are all positive for our market.

The other major theme from the GME situation that is relatable to the rare coin market and what we are trying to do here at CDN is the flow and availability of information. Every weekday, there is almost infinite information that any person with a retail brokerage account can access, much of it completely not understood by 99% of the population but anyone can learn. Option chains, implied volatility, gamma, and an alphabet soup of technicals are free for all. The sharing of this type of information on forums with millions of readers is how such astounding moves can occur in the blink of an eye. Whether one’s opinion is positive or negative regarding the GME situation, without the data it would not have caught on. It is the democratization of big data, something that for a very long time was reserved for only those in premier positions. While it is fashionable in America right now to politicize everything—something I abhor—democratization is the most fitting word. In the world of collectibles, the market can be even more opaque. By providing large amounts of clean and accurate data, markets open and draw more willing participants. Heritage blazed the path of offering huge amounts of price data. With more than 250,000 prices and millions of auction records and item images and always expanding, we are doing our best to do our part.

Subscribe to March 2021 edition of Monthly Greysheet for the industry's most respected pricing and to read more articles just like this.