The American Numismatic Association (ANA) World’s Fair of Money convention held in Philadelphia August 14-18, 2018 was a rousing success by many measures. 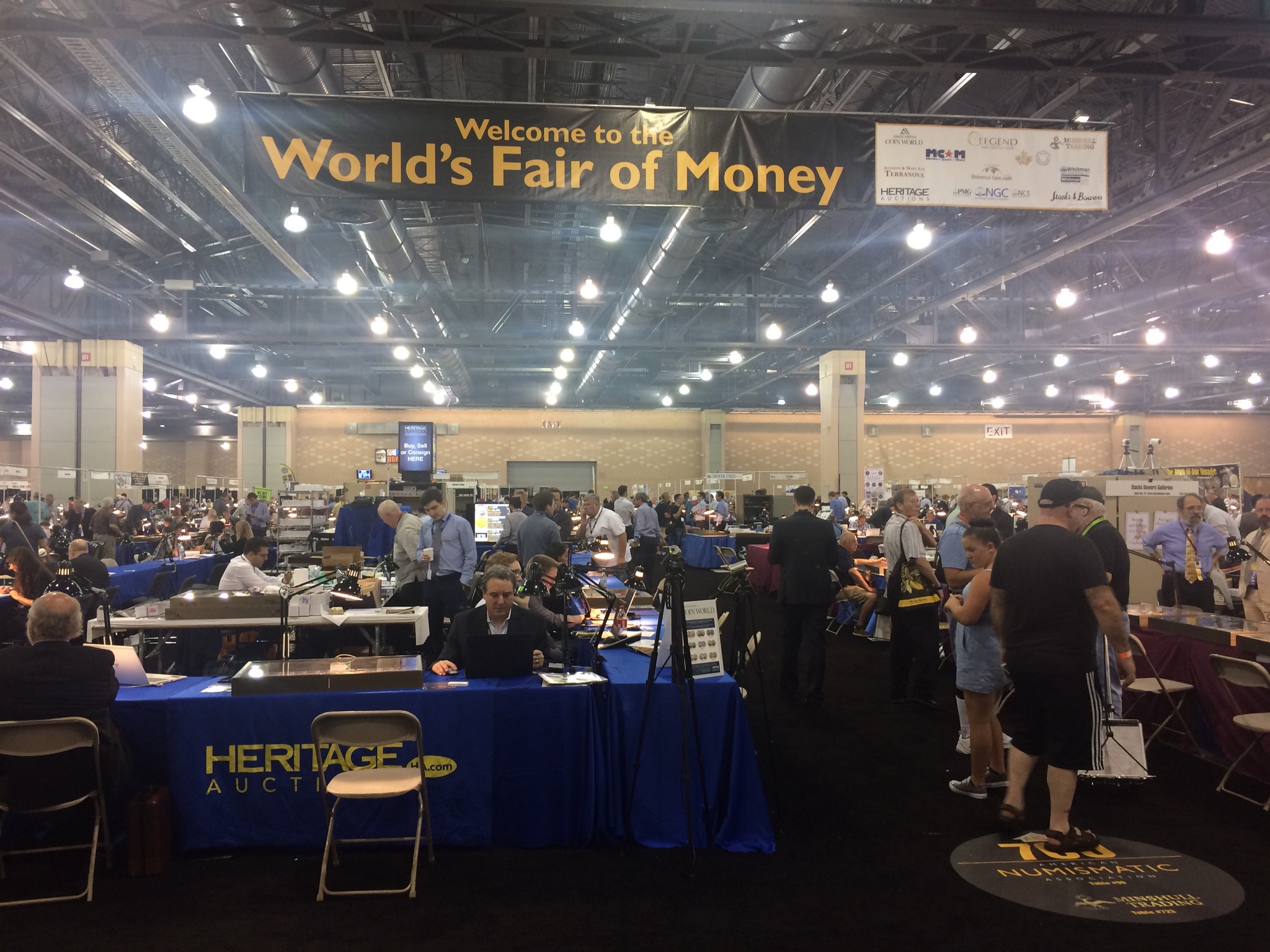 The American Numismatic Association (ANA) World’s Fair of Money convention held in Philadelphia August 14-18, 2018 was a rousing success by many measures. The ANA just released the total attendance figures for the coin show, and we now know 9,939 people walked through the doors of the Pennsylvania Convention Center in Center City to enjoy one of the biggest East Coast numismatic events in years. And it wasn’t just big attendance numbers that helped make the ANA World’s Fair of Money a success, but also record figures for some rare coins and currency that crossed the auction block there and several incredible displays on the bourse floor that turned many heads.

“Philadelphia, birthplace of our Constitution and coinage, lived up to all expectations,” said ANA President Gary Adkins. “We had record crowds. The bourse and auctions were very lively, and the many seminars, talks and meetings held during the convention were extremely well attended. I think you can safely say the City of Brotherly Love proved a great backdrop for what might well have been our best World’s Fair of Money in the last few years.”

Here at CDN Publishing, we had been talking for weeks leading up to the show about several exciting rare coins and paper currency lots that were to hit the auction block at the Philadelphia coin show. Heritage Auctions and Stack’s Bowers offered thousands of coins and notes in a variety of sales that cumulatively hammered for tens of millions of dollars. Heritage took $40 million for their best ANA event showing in three years. Leading their lots were the extremely rare 1854-S Liberty half eagle graded XF45 by Numismatic Guaranty Corporation and dubbed “The Discovery of a Lifetime” that commanded $2,160,000. Also grabbing headlines was a unique 1792 Washington President gold pattern that sold for $1,740,000. Meanwhile, Stack’s Bowers realized more than $41 million and notched its fourth most-expensive coin sold when the hammer fell on the finest-known 1913 Liberty nickel, graded by the Professional Coin Grading Service (PCGS) as PR66 and verified by Certified Acceptance Corporation (CAC), at $4,560,000 – a record for the coin. Paper currency also bought big numbers for Stack’s Bowers, including the sale of two million-dollar notes in Part II of the Joel R. Anderson Collection of United States Paper Money, which brought in a total of $9,652,860. An 1861 $50 interest-bearing note graded VF25 by PCGS Currency sold for $1,020,000 – the same amount for which a Series 1880 “Black Back” $1,000 silver certificate of deposit note traded.

Among the other highlights at the show was the exhibition of several notable rarities, including three 1933 Saint-Gaudens double eagles that wowed guests at the United States Mint booth. Meanwhile, the ANA showcased an example of the 1943 bronze Lincoln cent, a 1792 half disme, an 1861 Confederate half dollar, and an 1861 Paquet reverse gold double eagle. And, if that weren’t enough to drop the jaws of history buffs and rare coin fanatics, then the only complete collection of 1783-dated Nova Constellatio patterns surely was; these coins, the first proposed for the United States and struck under authority of the U.S. government, were displayed alongside a 1792 Birch cent and 1792 Eagle-on-Globe copper pattern quarter eagle.

We were very pleased at CDN Publishing with the response we had with our new Monthly Greysheet magazine, which we unveiled at the ANA show. I joined John Feigenbaum, Patrick Ian Perez, and Billie Blattel at booth 923, and all of us stayed busy signing up new subscribers, selling single copies of the August 2018 Monthly Greysheet and Greensheet, giving away copies of the CPG® Coin & Currency Market Review, and answering questions about our publications.

Billie held down the fort at the booth while John, Patrick, and I conducted interviews with various coin dealers and other major industry players, and many of these talks will be posted here on the CDN Blog in the coming days. However, we already have our main interview posted, an entertaining 22-minute interview John conducted with noted coin expert and author Scott Travers. Meanwhile, Patrick and I spoke with several other numismatic luminaries representing various areas of the coin and currency markets.

All in all, we on the CDN team were happy with our experience at the coin show in The City of Brotherly Love. Philly was a great host, the convention center is an extremely convenient location adjacent to many hotels, and the Reading Terminal Market – connected to the convention center – offered all of us a plethora of amazing and affordable culinary options. And we had a great time at a special kickoff ceremony the ANA held at the Museum of the American Revolution. Meanwhile, attendees seemed to enjoy the show. I was at the show on Saturday afternoon, the day the general public was admitted for free, and it was excellent seeing the bourse floor filled with diverse crowds of people, many of whom were visiting a coin show for the very first time. We know the hobby needs that type of exposure to help grow. How many new coin collectors were born at the ANA World’s Fair of Money in Philadelphia we may never know, but of this we can be certain: it was one of the best coin shows in a very long time.