On January 9, 2019, the Chicago Coin Club celebrated a momentous occasion with the club&#8217;s 1200th meeting. This milestone was the first celebratory event the Chica 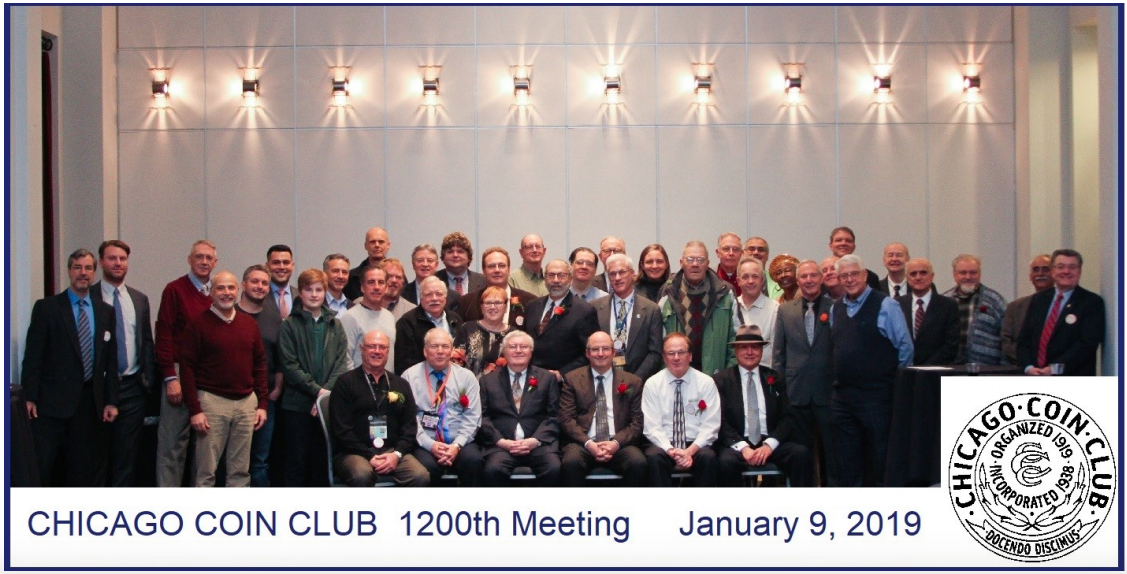 Since 1919 the CHICAGO COIN CLUB has informed, nurtured, educated, and supported coin collectors of the Greater Chicago and suburban areas. While its core membership is in the Chicago area, it also reaches to individuals throughout the United States and internationally. With its 100 years the Chicago Coin Club lives by the Latin motto Docendo Discimus, “We Learn By Teaching.”

Chicago Coin Club meetings traditionally combine three segments a club business portion, an official numismatic presentation and club member Show-and-Tell highlighting new, old, fun, rare, interesting, strange, or other pieces from their collections. The 1200th meeting combined a celebratory reception and social hour with food compliments of Chicago Coin Company, the standard club business reports then a Mega Show-and-Tell by club members who were asked to bring something of extra importance from their collection to share with the meeting attendees. As our club’s Latin motto says Docendo Discimus, “We Learn By Teaching,” club members did not disappoint with the Mega Show-and-Tell. 25 presentations were given covering items from Ancient to US coins, numismatic and other literature and publications, family numismatic gifts and history, primitive money, and more.

The reception time included a 100-year retrospective video presentation that played continuously highlighting events, club medals, past presidents, publications, conventions, and other club history. All attending club members were asked to sign both a copy of the January 2019 CHATTER, the club’s monthly newsletter, and a $100 bill in “Short Snorter” fashion. Attending members also received a special elongated 1919 Walking Liberty half dollar with the 1919 date clearly visible on the obverse and the imprinted 1200th meeting and date on the reverse. A special 2.25” x 3.5” brass plaque with photo chemically etched image featuring the Chicago Water Tower and the Club Anniversary information was also given to attendees.