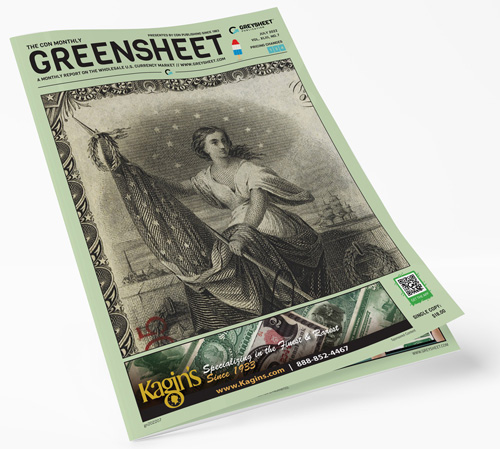 As I write this month’s column the financial markets are experiencing their greatest volatility in nearly two years. The Federal Reserve, whose long-past issues are so avidly collected by the paper money community, has increased the benchmark interest rate in attempt to cool the inflationary trend. As an expected result, there has been an avalanche of articles, business shows, and newsletters produced on how investors are to navigate such times. The amount of emails I have received from sell-side brokers over the past two weeks have been enough to bulge my email trash folder. We also have massive deleveraging in the cryptocurrency space, where cracks or outright failures in stablecoins and exchanges are creating contagion, with counterparty risk going through the roof. None of these events should be placed in the category of shocking, as most markets have gone only one direction for the past 18 months; upward momentum does not go on forever. If the underlying fundamentals of a market are solid growth can continue for an extended period, but the increases we have seen recently have been largely fueled by policy and the roughly $4 trillion the Treasury Department and other agencies have injected into the economy in response to COVID-19. Yes, in legislation and on paper these funds are earmarked for relief, but inevitably a chuck of it goes into various markets as people “buy things,” including things they collect.

Naturally during times such as these much attention is turned to so-called “inflation hedges” and “safe haven” assets, but these terms do not mean what they used to. Although it has been 14 long years since the Great Recession, many people still think in an outdated way. Yes, physical gold and silver will always be the ultimate safe haven, because it is a true form of currency, infinitely liquid, and transportable. But for rare coins and paper money, their values have been pushed up by the same asset price inflation that has driven equities. An item cannot increase in value while at the same time be a true “inflation hedge.” What it can give, however, is downside protection. 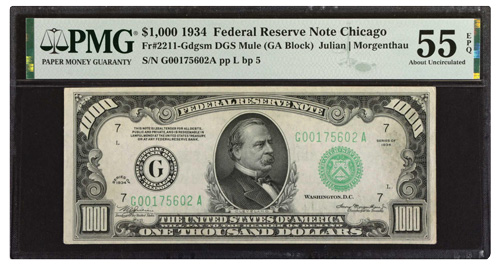 The most positive aspect of the market for numismatic items, as I have written numerous times in the past, is its stability. Certainly, it is not free from the effects of things like speculation and opportunistic promotion, but compared to many other areas of tangible assets, the long-term growth of the market and corresponding values is much steadier. With the exception of very rare, high value notes that do not trade often and whose potential buyer base is very thin, we rarely see rare coins or paper money correct by greater than 15% to 20%. Meanwhile, collectible areas whose markets are less mature and more hype-driven, we are seeing corrections of anywhere from 25% to 40%. The certified (graded) comic book market has been correcting for the past three months primarily because many items, particularly modern books, were bringing prices that were out of line from a supply point of view. Back to paper money, the market appears to be very stable. There have not been any major auctions since the Heritage Central States sale, but that will quickly change in August. In the meantime, weekly and quarterly online-only sales have been producing solid results at what would be interpreted as retail prices. When I am doing my monthly pricing analysis, I compare auction prices realized and other sales data to both the Greensheet wholesale price and our Collectors Price Guide (CPG®) price. I speak to dealers to gauge how aggressive they are buying and the size and quantity of the deals they are encountering in the market. Although demand may—and I emphasize may—be leveling out, there is still not enough supply to the point where dealers can easily restock notes they need. Additionally, it is impossible to ignore the impact of world paper money and international auctions. The Hong Kong sales held by Stacks Bowers and Heritage, the auctions of Spink in London, and the Netherlands sales now often reach total prices realized of $2 million or more. It is quite interesting that these sales are almost totally devoid of United States paper money. Of course, the American auction houses keep their world paper and U.S. paper sales separate, but would it be a worthy experiment to have a combination sale? It stands to reason that U.S. notes are underrepresented in the holdings of collectors outside of America, and if it were presented and marketed in a way in which the two areas are not mutually exclusive, it could open up a whole other buying base.

Subscribe to July 2022 edition of Greensheet for the industry's most respected pricing and to read more articles just like this.