In the third and final installment of the series, Greg Reynolds gives advice on how a collector can start a meaningful collection of these fascinating and historic collectibles.

In part one, of this series the background and meaning of Connecticut Coppers were discussed. In part two, the contents of a general set were explained. Although there are more than three hundred varieties of Connecticut Coppers, it is explained in part two that an affordable set of just twelve coins is complete in a logical sense, by date and subtype. Here in part three, the focus is on the costs and availability of the coins themselves so that collectors may commence building their respective sets

A collector should begin by spending amounts that he or she regards as small. Collectors tend to learn about a series while they are collecting. It is a good idea to carefully inspect coins, read about coins and ask questions. Some collectors may wish to start with low grade or ungradable coins in ‘details’ holders while effectively maintaining the option of upgrading later. A set comprising of the representatives of the following twelve dates or date+subtype combinations is complete enough and may amount to an excellent collection of this fascinating series.

The obverse varieties really do not appear much different from each other, though one variety is often hyped. As an analogy, it is worth noting that the bust of Miss Liberty tends to noticeably vary in size and style on Capped Bust Lettered Edge half dollars dating from 1807 to 1836, which should be called Reich Capped Bust Bust halves. For coins struck before 1840, especially before 1828, slight differences in style and size of design elements are not unusual, and it is not necessary to seek representatives of all variations in order to complete a meaningful set of a series of coins.

In November 2019, Stack’s-Bowers sold six of them. A raw coin that was said to have “environmental damage” and graded Fine details realized $156. A raw coin that was graded VG10, presumably by the cataloguer, brought $360. A PCGS graded VF20 1785 Bust Left coin was auctioned for $720. I am deliberately honing in on sales of relatively less rare die pairings to illustrate the fact that a set by date may be assembled without spending a large amount of money.

I maintain that the so called “Small Head” and “Large Head” varieties are not substantially different.

On February 23, 2020, the firm called GreatCollections sold a Mailed Bust Left 1786 in a PCGS Genuine holder, which is said to have suffered environmental damage and to have the details of a VF grade coin. This coin sold for $58.50.

These are extremely rare, though they can be found, and are priced reasonably, given their rarity. It is important to remember that there are a significant number of Connecticut and other State Coppers that are not currently in PCGS or NGC holders. Until the 2000s, a majority of collectors of colonials tended to prefer raw coins.

These are not rare. 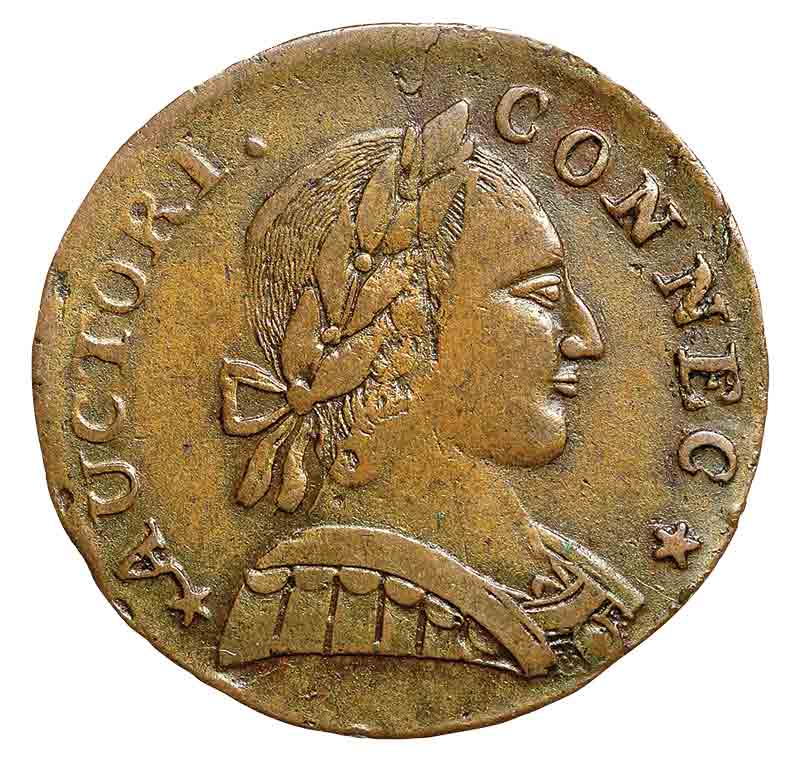 This has been termed “Muttonhead” since before 1875. It is generally believed that these were not minted in Connecticut and not at the Machin’s Mills facility near Newburgh, New York. During the 18th century, there were informal, underground mints in North America, which often made imitations and counterfeits. A particular clandestine mint in Massachusetts is often cited by historians and Muttonhead Connecticut Coppers could very well have been made there.

It is possible that Muttonhead Connecticut Coppers were partly satirical in nature. Did they poke fun at King George III and Britannia? It is also possible that the differences in design were effected for legal reasons, to later argue, if necessary, that these were legal imitations of Connecticut Coppers rather than counterfeits minted with criminal intent. There were instances of clandestine mints during the 1780s intentionally making very inexact imitations with the intention of evading laws against counterfeiting or preparing a defense in advance. Although the pertinent legal issues during the 1780s were extremely ambiguous, the Muttonhead pieces are now regarded as true coins.

Although the Muttonhead is clearly an additional date of the year 1787, the size of the head is not otherwise a primary factor. Either a Large Head or a Small Head is sufficient to represent a Mailed Bust Right 1787.

A Large Head 1787 Mailed Bust Right that has been PCGS or NGC graded in the range of VG10 to VF30 would be likely to sell for a price between $2,500 and $10,000, depending upon the die variety, surface quality and attractiveness of the individual coin.

As the Large Head 1787 Mailed Bust coins are very rare, it makes sense to acquire a Small Head 1787 for a general set. A theme here is to provide guidance for practically assembling a set of Connecticut Coppers.

In one of the Heritage auctions of the Eric Newman Collection, there appeared one of two known 1787 Mailed Bust Right Connecticut Coppers with Britannia facing to the right on the reverse (Auction #1199, May 2014, lot 30080, p. 145). I carefully examined this piece in 2014. I theorize that it is not a coin. It could be a pattern, an experimental piece, a fantasy item, or a fake.

As a significant number of now surviving Connecticut Coppers were illicitly made at mints outside of Connecticut, and Coppers of the time period were often copied, there is a huge gray area in regard to legal imitations, contemporary counterfeits, and fakes.

The Newman Collection, 1787 Britannia facing right piece is the strangest Connecticut Copper that I recollect at the moment. That piece is heavily corroded, way off-color, and has weirdly smooth areas among misshapen areas, plus the physical characteristics of the planchet are atypical in a way that I cannot quite explain at the moment. The wavy nature of that piece and the conveniently missing detail on Britannia, the design element that makes that item distinctive, concern me. The odd twisting and sometimes overflowing rims raised red flags in my mind, too. In my opinion, a Britannia Facing Right Connecticut Copper is not needed for a complete set.

There are many die varieties of 1787 Draped Bust Left Connecticut Coppers, yet the differences among them are very minor. It is fair to classify of all of them as one date of one subtype.

Even if two coins were struck from the same pair of dies and have received the same numerical grade from the same grading service, they may be significantly different in many ways. The health of the planchet (prepared blank), manners of storage, consequences circulation, later handling by collectors and other factors affect surface quality and eye appeal. 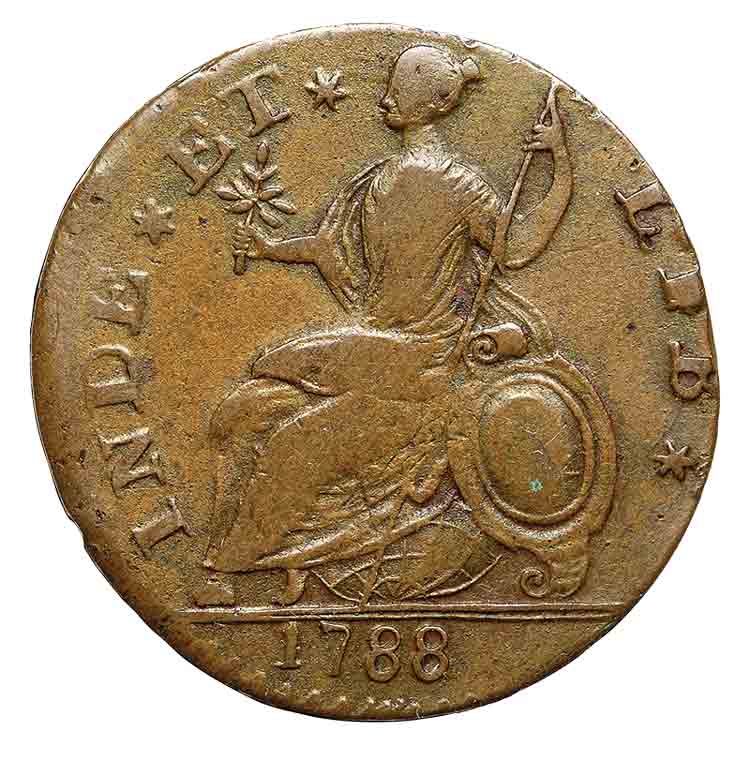 These are not difficult to find and acquire. Many, though, were manufactured in a primitive and careless manner, with numerous mint-caused defects. Many others corroded substantially over the years. Pleasant coins may bring noteworthy premiums.

On November 15, 2019, Stack’s-Bowers auctioned a PCGS graded XF45+ Draped Bust Left 1788 from the Robert Martin Collection for $1,380. This same coin was earlier in the collection of Sylvester Crosby, who published a landmark book on Early American coins in 1875. For decades, this coin was in the Garrett Family Collection, one of the all-time greatest collections of American numismatic items.

Examples of auction results and other public sales are intended to provide an idea of current market values and the availability of Connecticut Coppers. The coins mentioned are representatives of dates and subtypes, not of especially rare die varieties. Moreover, specific coins are not being recommended here. Sale results are intended to provide general guidance and should not be interpreted narrowly.

Collectors should enjoy their pursuits while being careful. A coin that seems like a bargain may have problems that are not readily apparent. It is important to not take certified grades too seriously. The same grading service may assign different grades to the same coin at different times. It is also important to learn about conservation, cleaning and doctoring.

Collectors should not expect Connecticut Coppers to be flawless and pristine. Mint-caused imperfections and imperfections that came about due to normal wear or storage are parts of the personality of the respective coin. Connecticut Coppers are among the most wholesome of rare American coins, are available in most major coin auctions, and are often collected by buyers who are interested in their historical aspects.

Subscribe to March 2021 edition of Monthly Greysheet for the industry's most respected pricing and to read more articles just like this.