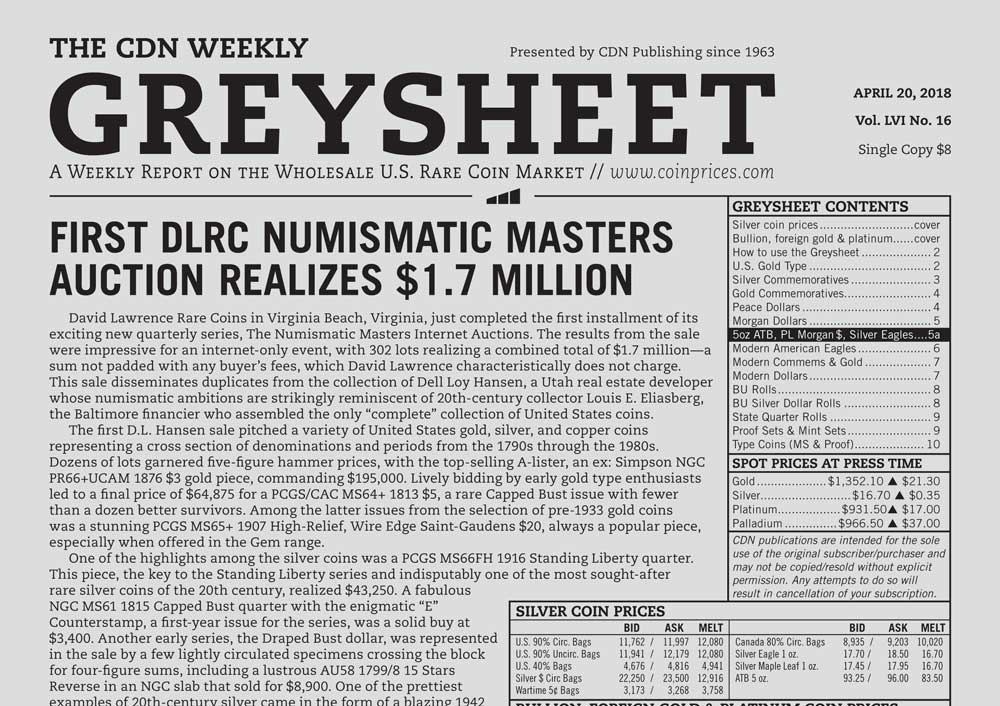 David Lawrence Rare Coins in Virginia Beach, Virginia, just completed the first installment of its exciting new quarterly series, The Numismatic Masters Internet Auctions. The results from the sale were impressive for an internet-only event, with 302 lots realizing a combined total of $1.7 million—a sum not padded with any buyer’s fees, which David Lawrence characteristically does not charge. This sale disseminates duplicates from the collection of Dell Loy Hansen, a Utah real estate developer whose numismatic ambitions are strikingly reminiscent of 20th-century collector Louis E. Eliasberg, the Baltimore financier who assembled the only “complete” collection of United States coins.

The first D.L. Hansen sale pitched a variety of United States gold, silver, and copper coins representing a cross section of denominations and periods from the 1790s through the 1980s. Dozens of lots garnered five-figure hammer prices, with the top-selling A-lister, an ex: Simpson NGC PR66+UCAM 1876 $3 gold piece, commanding $195,000. Lively bidding by early gold type enthusiasts led to a final price of $64,875 for a PCGS/CAC MS64+ 1813 $5, a rare Capped Bust issue with fewer than a dozen better survivors. Among the latter issues from the selection of pre-1933 gold coins was a stunning PCGS MS65+ 1907 High-Relief, Wire Edge Saint-Gaudens $20, always a popular piece, especially when offered in the Gem range.

One of the highlights among the silver coins was a PCGS MS66FH 1916 Standing Liberty quarter. This piece, the key to the Standing Liberty series and indisputably one of the most sought-after rare silver coins of the 20th century, realized $43,250. A fabulous NGC MS61 1815 Capped Bust quarter with the enigmatic “E” Counterstamp, a first-year issue for the series, was a solid buy at $3,400. Another early series, the Draped Bust dollar, was represented in the sale by a few lightly circulated specimens crossing the block for four-figure sums, including a lustrous AU58 1799/8 15 Stars Reverse in an NGC slab that sold for $8,900. One of the prettiest examples of 20th-century silver came in the form of a blazing 1942 NGC PR68* Walking Liberty half dollar with frosty cameo devices and nearly flawless black fields—an attractive super-grade stunner that captured a hammer price of $2,935.

A few other lots worth mentioning include a gorgeous rainbow-toned NGC/CAC MS68 3-cent silver that sold for $8,825 and is tied with only a handful of other NGC-certified examples as the highest-graded example known. Another rarity flying under many collectors’ radars is the 1803 Draped Bust Small 8 half dime, a scarce early issue that PCGS estimates has just 30 survivors; it was represented in the Numismatic Masters auction by an NGC/CAC VF35 specimen that took $9,150. Like “trimes” and half dimes, “double dimes”—20-cent pieces—often go relatively unnoticed by many in the numismatic community. Yet, in the higher grades, they are exceptionally scarce, as is the case with the proof-like PCGS MS65 1875 Philadelphia-minted better date—a 20-cent issue with only 23 known survivors at that level and just 9 grading higher. This beauty, boasting light cameo frosting, was a relative bargain at $4,150.