The Honorable John Boehner, who represented Ohio in the US House of Representatives from 1991 to 2015 and served as Speaker of the House from 2011 to 2015, has agreed to individually hand-sign certification labels exclusively for Numismatic Guaranty Corporation® (NGC®). 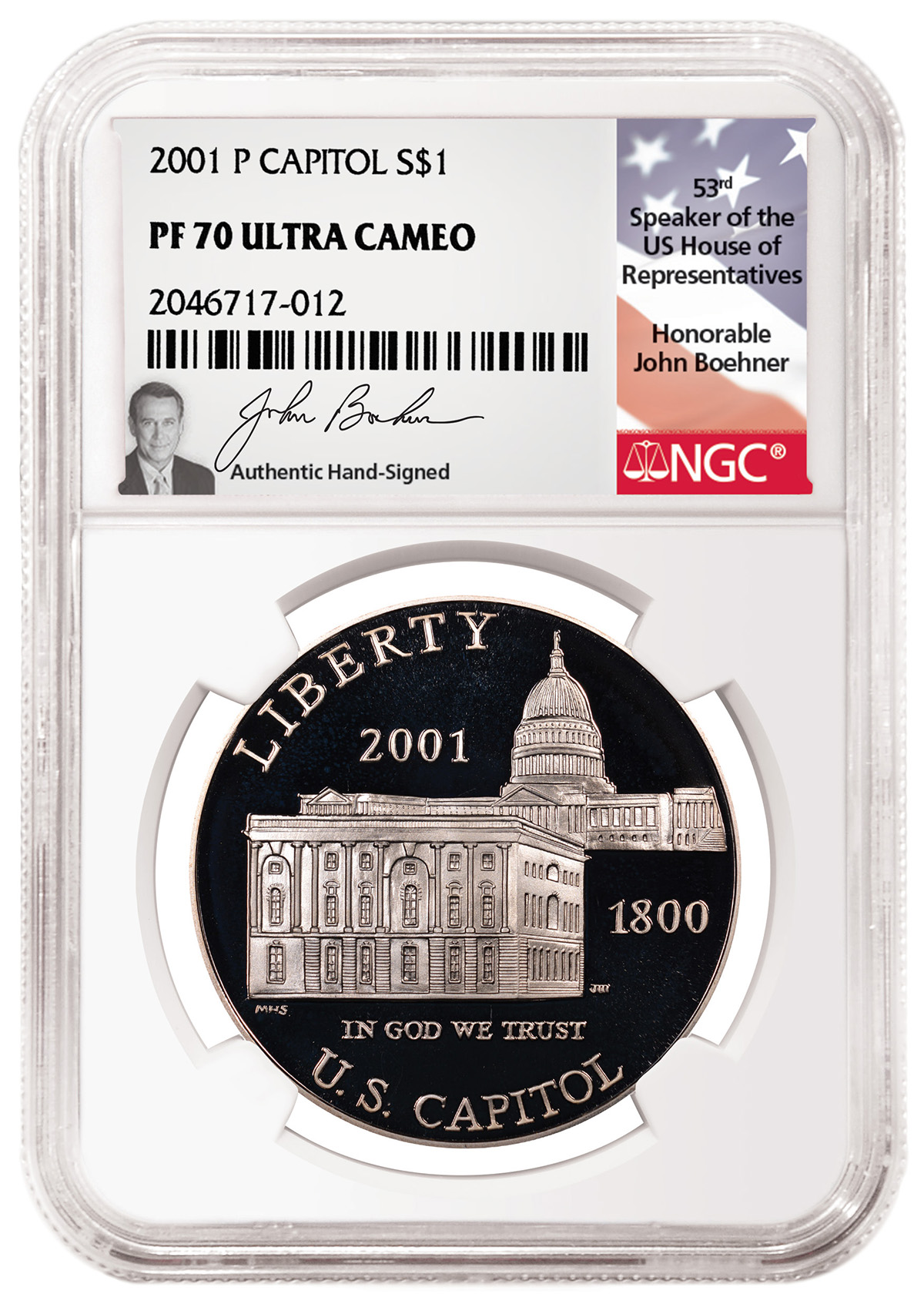 SARASOTA, Fla. (Nov. 4, 2019) — The Honorable John Boehner, who represented Ohio in the US House of Representatives from 1991 to 2015 and served as Speaker of the House from 2011 to 2015, has agreed to individually hand-sign certification labels exclusively for Numismatic Guaranty Corporation® (NGC®).

In January 2011, the House of Representatives elected Boehner as Speaker, making him third in line to the United States presidency. Before becoming Speaker, Boehner had served as minority leader since 2007 and was elected his party’s majority leader in 2006.

During his first year as Speaker, Boehner helped negotiate a bipartisan federal budget agreement while working to curb wasteful spending. He also earned a reputation as a crusader against congressional corruption.

Before Boehner stepped down as Speaker at the end of 2015, Pope Francis spoke to a joint meeting of Congress after accepting a formal invitation from Boehner—an event Boehner considered to be the highest point of his congressional career.

“I hold the values of economic freedom, individual liberty and personal responsibility very dear. In many ways, American currency represents all of these values,” said Boehner. “For this reason, I’m very proud to collaborate with NGC to champion the American dream as it is reflected in our nation’s coins.”

“NGC is proud to partner with such a well-known name in US political history,” said NGC Chairman and Grading Finalizer Mark Salzberg. “An NGC Authentic Hand-Signed Label featuring John Boehner’s signature adds a personal connection to a prominent figure in American politics.”

NGC Authentic Hand-Signed Labels pair an influential person’s autograph with a coin to create a one-of-a-kind collectible. Boehner joins a diverse roster of NGC Signature Label signers, including Edmund C. Moy, 38th US Mint Director; Charlie Duke, Apollo 16 Astronaut; and Gov. Hon. Mike Castle, who also served as a member of the US House of Representatives.

NGC is the world’s largest and most trusted third-party grading service for coins, tokens and medals, with more than 44 million collectibles certified. Founded in 1987, NGC provides an accurate, consistent and impartial assessment of authenticity and grade. Every coin that NGC certifies is backed by the comprehensive NGC Guarantee of authenticity and grade, which gives buyers greater confidence. This results in higher prices realized and greater liquidity for NGC-certified coins. To learn more, visit NGCcoin.com.