The release of the first Palladium American Eagle coins in autumn 2017 marked the beginning of a new era for the United States bullion coin program. 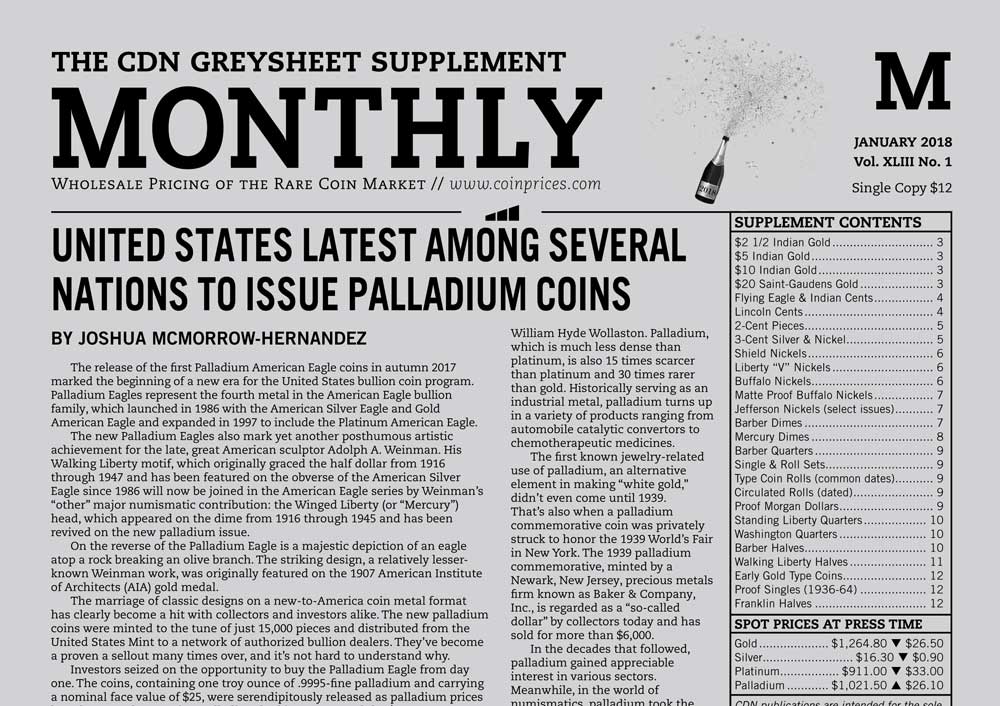 The new Palladium Eagles also mark yet another posthumous artistic achievement for the late, great American sculptor Adolph A. Weinman. His Walking Liberty motif, which originally graced the half dollar from 1916 through 1947 and has been featured on the obverse of the American Silver Eagle since 1986 will now be joined in the American Eagle series by Weinman’s “other” major numismatic contribution: the Winged Liberty (or “Mercury”) head, which appeared on the dime from 1916 through 1945 and has been revived on the new palladium issue.

On the reverse of the Palladium Eagle is a majestic depiction of an eagle atop a rock breaking an olive branch. The striking design, a relatively lesser-known Weinman work, was originally featured on the 1907 American Institute of Architects (AIA) gold medal.

The marriage of classic designs on a new-to-America coin metal format has clearly become a hit with collectors and investors alike. The new palladium coins were minted to the tune of just 15,000 pieces and distributed from the United States Mint to a network of authorized bullion dealers. They’ve become a proven a sellout many times over, and it’s not hard to understand why.

Investors seized on the opportunity to buy the Palladium Eagle from day one. The coins, containing one troy ounce of .9995-fine palladium and carrying a nominal face value of $25, were serendipitously released as palladium prices have been on the upswing. Palladium had just surpassed the $900-per-ounce threshold when the coins hit the streets on September 25, 2017. That’s some $200 greater than the metal’s price on New Year’s Day 2017. As of this writing in late December, palladium trades for more than $1,000 an ounce and is trending upward still.

Yet, as coin dealers have long known, the investor-friendly American Eagle coins—even those with “bullion-quality” finishes—have tremendous crossover appeal with collectors. And that’s exactly what we’ve seen with the Palladium Eagle.

It would be an understatement to say the American Palladium Eagle series was long overdue. President Barack Obama signed the American Eagle Palladium Bullion Coin Act (Public Law 111-303) into law on December 14, 2010. A battery of developmental studies and other matters waylaid the first striking of the new palladium coins authorized by the Bullion Coin Act of 2010 for many years. That much aside, the United States was already a latecomer to the palladium coin scene.

The first official government-issued palladium coins were introduced by Sierra Leone in 1966. By the 1980s and 1990s, many other nations also introduced palladium coins. Yet, palladium itself is a relative newcomer to the precious metals arena, having been discovered around 1803 by English chemist William Hyde Wollaston. Palladium, which is much less dense than platinum, is also 15 times scarcer than platinum and 30 times rarer than gold. Historically serving as an industrial metal, palladium turns up in a variety of products ranging from automobile catalytic convertors to chemotherapeutic medicines.

The first known jewelry-related use of palladium, an alternative element in making “white gold,” didn’t even come until 1939. That’s also when a palladium commemorative coin was privately struck to honor the 1939 World’s Fair in New York. The 1939 palladium commemorative, minted by a Newark, New Jersey, precious metals firm known as Baker & Company, Inc., is regarded as a “so-called dollar” by collectors today and has sold for more than $6,000.

In the decades that followed, palladium gained appreciable interest in various sectors. Meanwhile, in the world of numismatics, palladium took the spotlight when the West Africa nation of Sierra Leone issued a series of three palladium commemorative coins honoring the former British colony’s fifth anniversary of independence as a sovereign nation. The 1966 Sierra Leonean 1/4 golde, 1/2 golde, and 1 golde palladium coins bear identical designs, with a map of the nation on the obverse and a lion’s head on the reverse.

The following year, in 1967, the Polynesian nation of Tonga issued its own three-piece set of commemorative palladium coins. Honoring the coronation of Taufa ‘ahau Tupou IV on July 4, 1967, the three coins were minted in the denominations of 1/4 hau, 1/2 hau, and 1 hau.

Following a quiet period in the 1970s, palladium remerged on the international numismatic scene in the mid 1980s with the introduction of palladium commemoratives minted by Albania and France in 1986. Portugal, Bermuda, and the Isle of Man followed suit in 1987. Of these, the Isle of Man offered two palladium issues that are particularly intriguing for the average American collector. These include a commemorative crown honoring the America’s Cup yachting championship and a U.S. Constitution Bicentennial crown bearing a depiction of the Statue of Liberty and the likenesses of several notable figures in American politics.

Michael Garofalo, director of numismatics at bullion distributor APMEX in Oklahoma City, loves international palladium coins. “Bermuda struck some attractive palladium coins in the 1980s—the Sea Venture coins—which have a great rendition of an early sailing ship under full sail. I’ve always liked those,” he says. “But there are numerous other choices, including the palladium Chinese Pandas, Canadian Maple Leafs, and of course the Russian Ballerinas—Europe’s favorite palladium coin.”

He’s likewise enthusiastic about the American Palladium Eagle, which he says “rapidly” sold out. “Great design, low mintage, and a new metal equals a recipe for success. We cannot replace them fast enough as they are being sold.” He adds, “most of these 15,000 coins are already off the market in strong collector and dealer hands.”

Only a few months removed from the coin’s debut in September 2017, the fledgling Palladium American Eagle is still a hot item going into 2018. But who’s buying them? Are high premiums over spot—several hundred dollars in most cases—pushing away investors? Are collectors shying away from buying what is otherwise a grossly expensive coin with “only” a bullion-quality finish? In Garofalo’s view, both collectors and investors are busily snapping up Palladium Eagle for a variety of reasons. “Collectors love the [coin’s] low mintage and the designs. Investors love the upside potential. Our customers love these coins regardless of what their primary motivation for buying them is.”

He said his customers are particularly fond of the MS-70 certified specimens, a staple secondary market option for U.S. Mint modern bullion releases. “We have sold as many MS-70 coins as we have sold uncertified coins,” he said. “The 70-graded coins are extremely popular.” He anticipates the same will be true for the proof version of the Palladium Eagle, which the U.S. Mint is expected to release later in 2018.

General Manager Andrew Salzberg of Modern Coin Mart in Sarasota, Florida, shares similar hopes for the proof Palladium Eagles, but he also believes their overall market success will be contingent on two conditions. “I expect the proof release to do well, but it will depend on the mintage and the quality of the strike.”

He’s seen Palladium Eagles do very well in the collector market, especially the nicer-than-average specimens. “With the initial release of these coins, we saw some proof-like versions,” he says. “They were the first off the die, which resulted in some very beautiful proof-like surfaces.” Demand and premiums on the proof-like pieces were especially high, he adds. He’s also keeping his eyes peeled for any varieties or errors that could be discovered. “There could be some various errors that would be very interesting to collectors and would be very sought after.”

Overall, Salzberg thinks collectors are attracted to the new palladium series for many reasons. “It has a very eye-appealing design and the mintage was appropriate, which created demand and increased the value of the coin. Yet, enough were available so that the interested collectors were able to obtain a coin.”

Many hobbyists are undoubtedly adding the coin to their collections alongside the 2016 Liberty Centennial Gold Mercury Dime, a faithful reproduction of Weinman’s classic 90% silver Mercury dime in a 24-karat gold format; the U.S. Mint virtually sold out of the gold Mercury dime within days of the coin’s release on April 21, 2016.

As for the palladium coin, Salzberg says collectors are drawn to the new issue in part because it’s a necessary addition for building out a complete set of American Eagle coins. “However, it is impossible to ignore that this coin may increase in value,” he adds. “Either way, with having the appropriate mintage and the beautiful design, collectors win. This is just a beautiful coin that people will want to have in their collections.”

THE FUTURE OF PALLADIUM EAGLES

As the United States Mint is presently on track to continue the series in 2018 with the addition of proof specimens and possibly other variants, Garofalo and Salzberg suggest the Palladium Eagle will continue being a hit with collectors if the recipe for success is properly seasoned.

“Don’t change the popular design,” Garofalo cautions the U.S. Mint. “This philosophy has worked well for the silver and gold American Eagle programs.” He notes changing the design to create “a buzz” could “be risky in that the designs will invariably be compared from year to year.”

He also says keeping mintages similar to the 2017 levels (15,000 pieces) could help fuel the sale of future releases. “That allows the collectors and investors who purchase them to have a strong, liquid market into which they can be sold at any time. When the mintages are too high, prices plummet and collectors who bought them early lose money and lose interest.”

Salzberg thinks the U.S. Mint should follow through with its plans for special-finish Palladium Eagles. “I hope to see that the U.S. Mint delivers on what they have laid out for us—the bullion [release], then the proofs, and finally Mint State versions. Based on the success of the program, I hope that more thought, research, and energy goes into future releases.”

He owes much of the success for the Palladium Eagle, which he describes as “unique,” to the fact the metal is not “overused, like gold, silver, and platinum” and is something American collectors and investors are not used to seeing. “This coin was well received because of the new metal used and also its intriguing design,” he says. “It is really good to see the [United States] Mint break from the norm and try something new.”