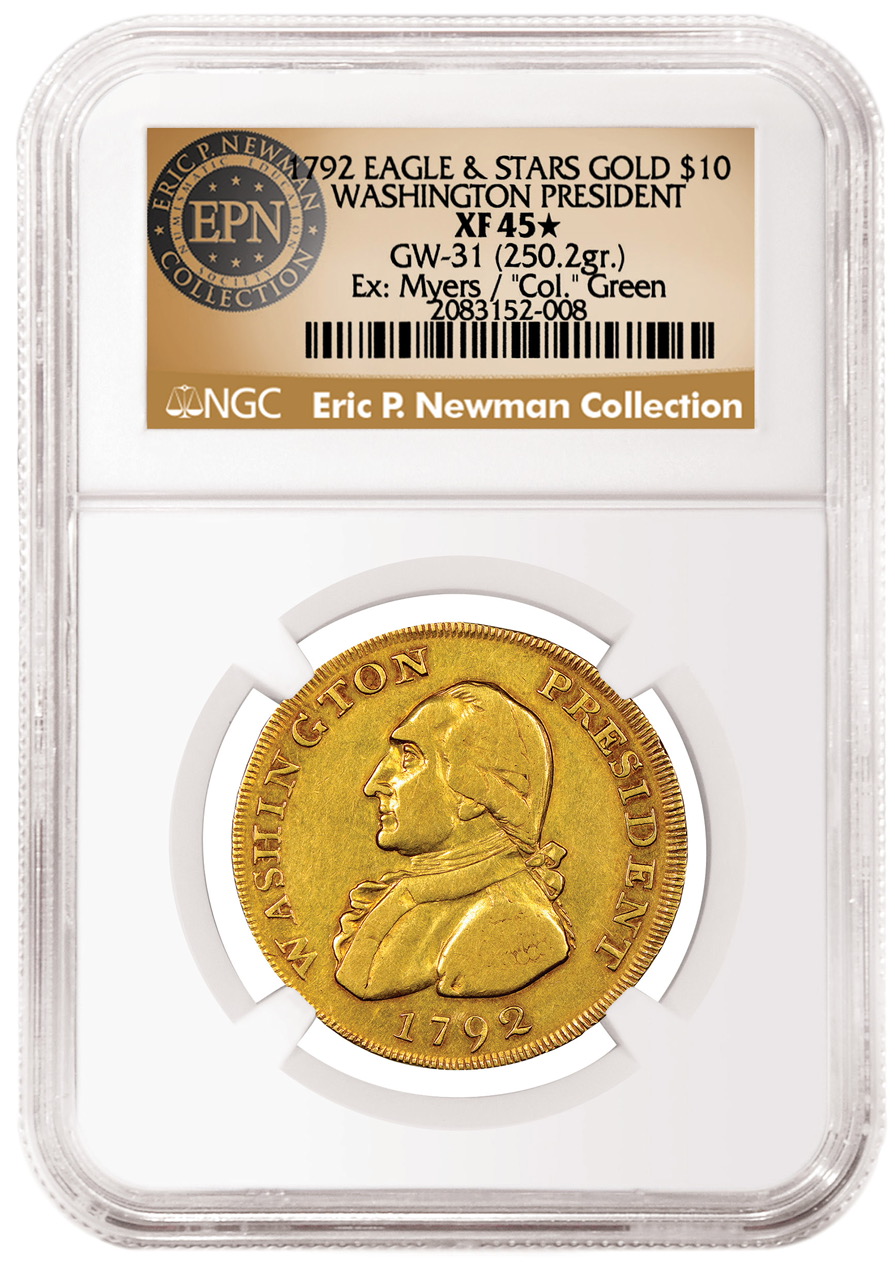 SARASOTA, Fla. (June 13, 2018) — Numismatic Guaranty Corporation (NGC) has certified the late Eric P. Newman’s most cherished coin: the unique 1792 Washington President gold eagle that researchers believe was presented to George Washington and carried by him as a pocket piece.

Graded NGC XF 45★, the coin will be sold without reserve by Heritage Auctions on August 16, 2018, at the ANA World’s Fair of Money in Philadelphia. All of the net proceeds will be donated to charity.

August’s sale marks only the third appearance of this extraordinary rarity in auction—and the first since 1890. After Washington, only eight elite numismatists have held this gold coin. The famed “Colonel” E. H. R. Green purchased it privately in 1933 for over $2,500, a significant sum for the day. Eric P. Newman acquired the coin in July 1942, and since then it has remained in his collection.

“This is one of the most amazing treasures that I have examined in my nearly 40-year career,” said Mark Salzberg, NGC Chairman and Grading Finalizer. “NGC is honored to have been selected to certify a coin with such remarkable history, provenance and appeal.”

Newman, one of the greatest numismatic researchers and writers of all time, believed that this coin was struck as a pattern (a proposed coin) for a gold eagle, or $10 piece, and was expressly struck for, presented to and carried by George Washington. Further research indicates that this coin was produced in America by Jacob Perkins of Newburyport, Massachusetts, rather than in England as previously believed.

The obverse of Newman’s unique gold pattern features a bust of Washington surrounded by “WASHINGTON PRESIDENT” and the 1792 date. The reverse features a heraldic eagle based on the Great Seal of the United States. It bears an edge lettered UNITED STATES OF AMERICA.

Newman, who passed away in November 2017 at the age of 106, assembled one of the most important collections of coins and paper money, with a particular focus on Colonial and Early Federal US pieces. Newman’s coins, which have been entirely certified by NGC, have achieved nearly $59 million at auction in a series of sales by Heritage Auctions since 2013.

Of all the great rarities owned by Newman, the 1792 Washington Gold Eagle was the scholar’s favorite. He explained why in 1975: “This coin is unique in that it was owned by George Washington. It is unique as the earliest gold pattern prepared for the United States coinage; and it is unique because only one example of the coin was made. What other American coin can command historical and numismatic respect of that magnitude?”

“NGC was the logical choice to grade this important rarity due to the tremendous success of the past NGC-certified selections,” said Stuart and Maureen Levine, advisors to the nonprofit Eric P. Newman Numismatic Education Society (EPNNES). “We look forward to the history-making sale in August.”

For more information about the sale, visit Heritage Auctions’ website HA.com. To view all of the NGC-certified selections from the Eric P. Newman Collection, visit NGCcoin.com/Newman.

Items being sold are from the extensive collection of Eric P. Newman Numismatic Education Society (a Missouri not-for-profit corporation) and have been assembled over a period of 90 years. Proceeds of the sale of all items will be used exclusively for supplementing the Society’s scholarly numismatic research efforts and for the benefit of other not-for-profit institutions selected by Eric P. Newman Numismatic Education Society for public purposes.

NGC is the world’s largest and most trusted third-party grading service for coins, tokens and medals. Founded in 1987, NGC provides accurate, consistent and impartial assessments of authenticity and grade. To ensure impartiality, NGC does not buy or sell coins and its full-time graders are prohibited from buying and selling coins commercially. Every coin that NGC certifies is backed by the comprehensive NGC Guarantee of authenticity and grade, which has added confidence and value for collectors and dealers around the world. Learn more at NGCcoin.com.

This has got to be one of the most underreported and unknown rarities in United States coinage. I have been a coin collector on and off since 1973 and I have never heard of it. However, I do have a question: What about this makes it a "Gold Eagle"? I see no denomination or indication of value anywhere. Would not this more properly be considered a medal? I understand it is not regular coinage from the US mint, which didn't exist yet, and I'm not trying to take away from its value, but it seems like a stretch to call it a coin at all, much less a gold eagle. I would love to hear from someone more scholarly on the topic.