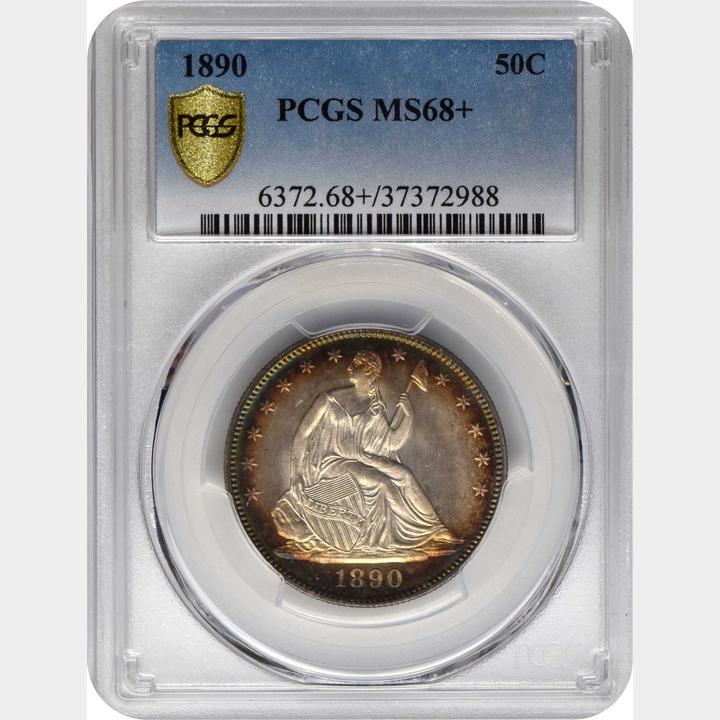 Despite the difficult circumstances the March 2020 United States coin auction held by Stacks Bowers, originally to be held in Baltimore, forged ahead and the Rarities Night, session four, just now concluded. We were anxious to see how the response would be, as there was virtually no floor presence. I watched virtually the entire session online, and here are some quick thoughts.

In term of pure beauty it is hard to find anything that could match the 1890 Liberty Seated half dollar graded PCGS MS68+. The finest of the entire type, it brought $120,000. The two major highlights, the 1884 and 1885 Proof Trade dollars were mixed. The 1884, graded PR64+ Cameo sold for $552,000, while the 1885, graded PR64 sold for $1,320,000. While a million-dollar sale is always impressive, the price according to the assigned grade, should have been higher. There are readily apparent hairlines on the coin, and perhaps a lower certified grade is warranted.

Elsewhere, as has been the case for some time, Morgan dollars as a group were soft with numerous lots being passed, however this could have just as much been a function of unrealistic reserves on the part of consignors. Better date gold was mostly solid across all denominations, and a lovely Proof 1913 Saint-Gaudens in PR66 sold for $162,000.

We look forward to tomorrow’s sale of Part VII of the Pogue Collection.

You are correct about your evaluation of the 1885 Proof Trade Dollar. What a mess of a coin! First off, if the coin is over $5,000. why doesn't it have a CAC sticker? This is just another example of the overgraded junk that is out there. Yes, it is a very rare coin, but that doesn't justify grading it differently than any other dollar. Second, if a coin has "hairlines" (and these are significant), the coin is not "As Issued", and therefore either impaired, damaged, or a grade of 58 or less. Third, what about those ugly black corrosion spots on the obverse? PCGS should be ashamed of themselves for grading such an ugly duckling a PR64. Too many coins are floating around that are overgraded, and many of them end up on Ebay. To reestablish some kind of respectability to the numismatic field, why isn't there more of a push to get the grading services to take these coins back and give them the proper grade? It would certainly increase the confidence of investors. In the meantime, I wouldn't buy any expensive coin without a CAC sticker. It is certainly worth the difference.

Bought a few coins from the sale, prices were not as low as I expected but was able to get a few nice items including a very reasonably priced proof ultra cam good coins usually command good prices in most markets