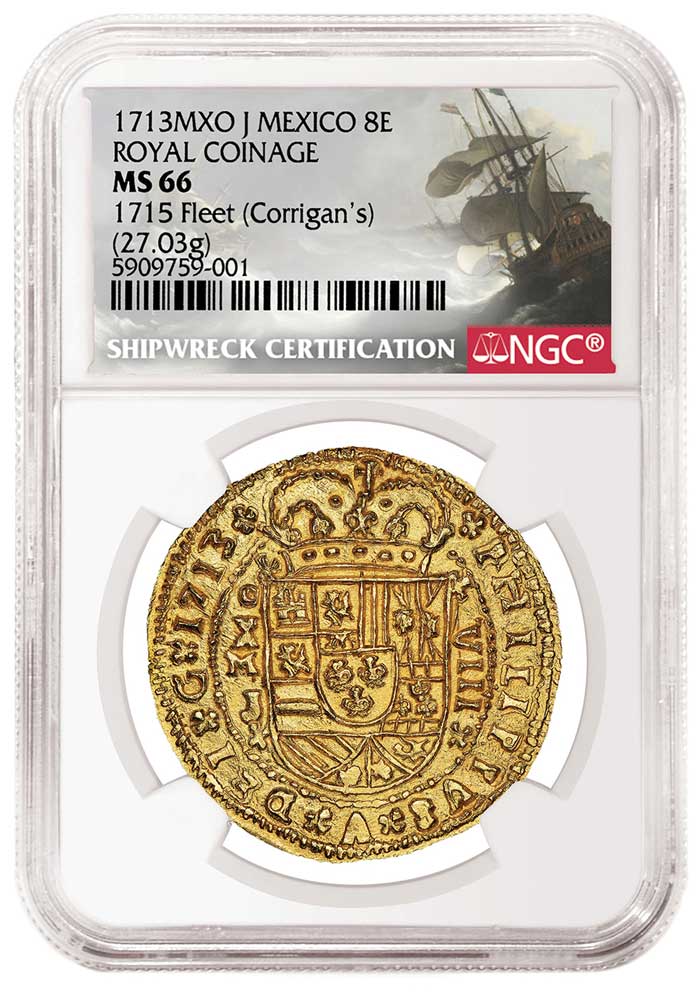 The Mexico 1713MXO J Royal Coinage 8 Escudos graded NGC MS 66 is estimated at an astounding $300,000 to $600,000. This exceptionally rare piece of Spanish colonial coinage was recovered from the fabled wreckage of the Spanish Plate Fleet of 1715, in which 11 of the 12 ships carrying prized gold and silver coins were lost to a hurricane off the coast of Florida.

Spanish cobs issued from 1680 to 1732 were mostly struck on irregular, thick planchets. However, Royals used carefully crafted, perfectly rounded planchets and specially prepared die designs to ensure uniformity and exquisite detail. It is theorized that these uncirculated treasures were struck at the Mexico City Mint for royalty.

This particular example is the finest of only two 1713-dated specimens known and arguably the best of the entire 1711 to 1713 series of cross-with-crosslets Royals. It is singular in its sharp, skillful strike, near-perfect centering and notably well-preserved luster.

After its recovery in 1998, it remained part of numismatist Isaac Rudman’s private collection for years before returning to market. As one of the most desirable gold coins in the world, its first public offering is sure to make for one of the most compelling auctions that Daniel Frank Sedwick LLC has ever held.

“NGC experts understand that preserving and sharing the coin’s story goes hand-in-hand with preserving the coin itself,” said Mark Salzberg, Chairman and NGC Grading Finalizer. “Discoveries like these deepen our understanding of Spain’s history while providing a phenomenal example of shipwreck treasure.”

“This coin is one of the most exciting Spanish colonial pieces we’ve ever offered in auction,” said Daniel Sedwick, President and Founder of Daniel Frank Sedwick LLC. “NGC certification gives our bidders confidence in the value and extreme high quality of such a top-tier historical coin as this.”

All estimates provided by the auction house.