It was in early 1793 that the nation’s first federally authorized coins intended for widespread circulation were struck. The entire production of official United States Mint coinage in 1793 was composed of copper coins, including the half cent and large-cent coins. 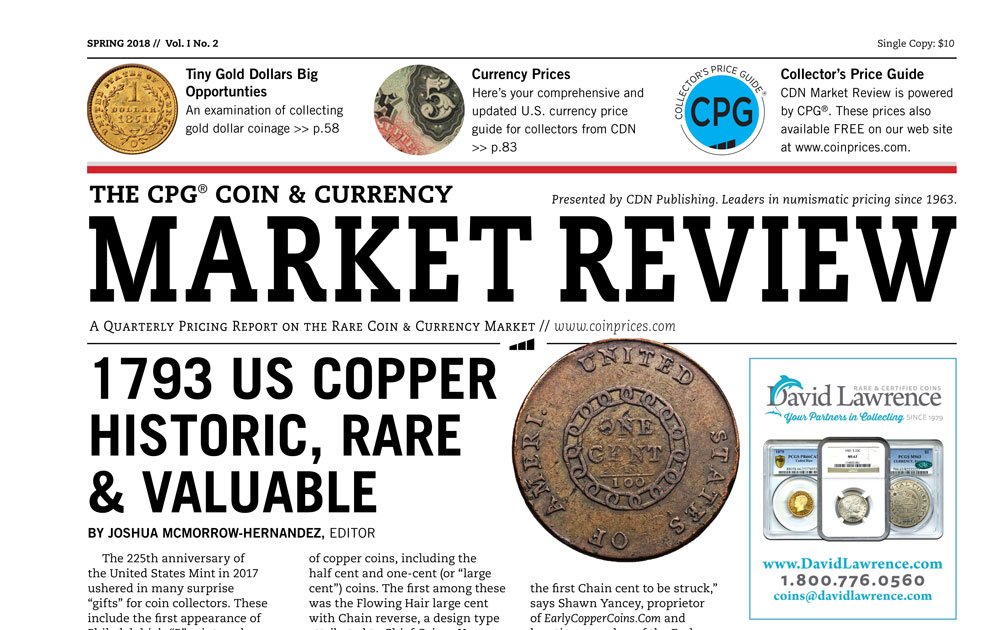 The 225th anniversary of the United States Mint in 2017 ushered in many surprise “gifts” for coin collectors. These include the first appearance of Philadelphia’s “P” mintmark on the one-cent denomination and the 2017 American Liberty 225th Anniversary Gold Coin, bearing the first-ever depiction on a coin of Miss Liberty with distinctly African American features. While the fervor over the Mint’s 225th anniversary has settled since 2017, there is a 225th anniversary of a different kind that numismatists are observing during the spring of 2018.

It was in early 1793 that the nation’s first federally authorized coins intended for widespread circulation were struck. The entire production of official United States Mint coinage in 1793 was composed of copper coins, including the half cent and one-cent (or “large cent”) coins. The first among these was the Flowing Hair large cent with Chain reverse, a design type attributed to Chief Coiner Henry Voigt.

Numismatic scholars determine the first large cents were struck from February 27 to March 12, 1793, with a production total of 36,103 pieces. The initial delivery of these large cents was made on March 1 and consisted of 11,178 cents totaling $111.78. This first batch included two varieties of large cents, including so-called “AMERI.” reverse, which reads “UNITED STATES of AMERI.” and the “AMERICA” reverse, with the nation’s name spelled out in its entirety.

“It is widely believed that the 1793 with AMERI. reverse was the first Chain cent to be struck,” says Shawn Yancey, proprietor of EarlyCopperCoins.Com and longtime member of the Early American Coppers organization. “Therefore, [the AMERI. reverse] has a lot of recognition not only as the first large cent, but it also has the distinction of having that abbreviated reverse. All of the other Chain cent varieties have the reverse corrected to ‘AMERICA.’”

The Chain cent was panned by the press. In particular, the bust of Miss Liberty was mocked as looking “in a fright,” while the Chain reverse, meant to symbolize national solidarity in the new Union, was derided as representing slavery. Copper planchets were exhausted before March 1793 came to a close, and Mint Director David Rittenhouse quickly approved of a new reverse design attributed to Adam Eckfeldt incorporating a wreath. The first Flowing Hair Wreath large cents were struck in April 1793. A total of 63,353 Wreath cents were coined from April to July 1793, before the obverse was redesigned with the Liberty Cap motif attributed to Joseph Wright. This design went into production in September 1793, and 11,056 Liberty Cap cents carrying the “1793” date were coined.

Jack Beymer has handled countless large cents and other early copper coins since becoming a coin dealer in 1964. He says all three major types of 1793 cents, including the Chain, Wreath, and Liberty Cap versions, are popular with collectors. “Among the three separate designs, the Chain and Liberty Cap designs being the rarest, the Wreath is the commonest of the three.”

While 1793 was an eventful, some could argue troubled, year for large cents, production went much more smoothly for the second denomination to roll of the presses of the Philadelphia Mint: half cents. The smallest denomination United States coin ever struck, the half cent was initially produced from July through September 1793, with all first-year examples carrying a Liberty Cap Head Facing Left design credited to Henry Voigt. Only 35,334 were struck, and while all 1793 half cents carry the same basic obverse and reverse, numismatists have identified four varieties to date.

Yancey says the 1793 half cent has several important distinctions, chief among these that they are the only other coin, aside from the large cent, struck by the United States Mint in 1793. “Additionally, the Liberty Cap Head Facing Left design was used for one year, so that makes them coveted not just for the date but also for the one-year design type.” 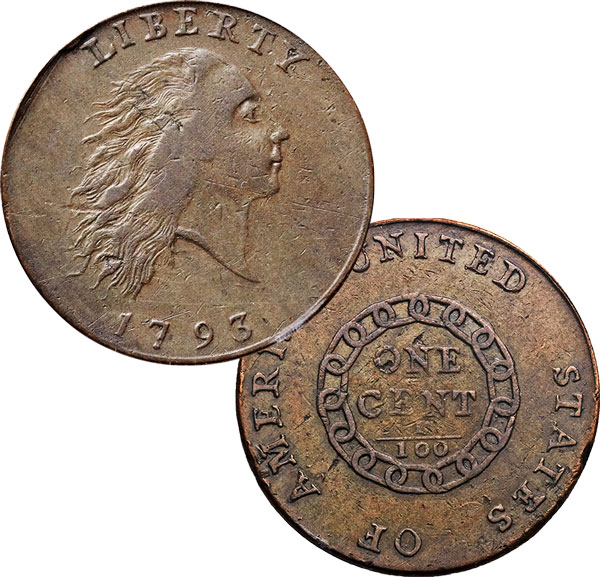 HISTORY YOU CAN HOLD

Half cents and large cents from 1793 are the types of relics that deserve a place in American history museums. Just as early Federal-era tableware, clothing, books, and jewelry tell the story of America during its early years, so, too, do half cents and large cents from the 1790s, with perhaps none more significant in representing our nation’s earliest years than the coinage of 1793.

Given their significance as numismatic rarities and historic early Americana treasures, Yancey says 1793 coinage has a special following in the marketplace. “I consider every 1793 copper to be extremely collectible in a cornerstone of any collection. I buy every one that I come across that is reasonably priced, and I always have multiple customers looking for 1793 coinage.” Meanwhile, Beymer, who, like so many coin dealers, witnessed market calamity in the coin market during and following the Great Recession of 2007-09, says 1793 coinage remained buoyant, weathering the storm well. “The market seems stable for these coins.”

1793 coinage has a diverse appeal unlike other Federal-period coppers, in large part due to their general significance in American history. Even Hollywood actor Jack Black comically referenced the 1793 Flowing Hair large cents in a December 2017 interview on late-night television talk show Conan, and 1793 coinage often appears alongside other relics of daily life in American heritage museums and educational exhibits. Their reputation as something of “trophy” coins aside, 1793 half cents and large cents are darlings of the numismatic world and have a huge collector base even among early American copper and type enthusiasts alone. 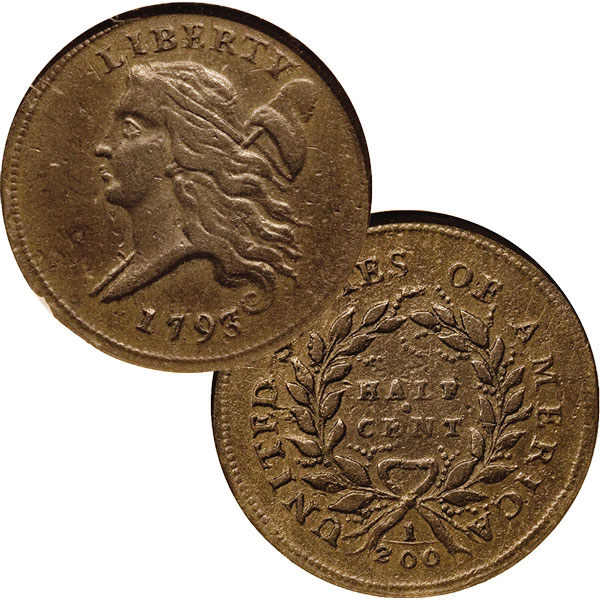 1793 half cents and large cents are categorically rare, with far fewer survivors than mintage figures may suggest. As Beymer earlier indicates, 1793 Wreath cents are the most common of the first-year large cents, with about 3,500 survivors across all grades. Meanwhile, the AMERI. and AMERICA Chain cents are extraordinarily scarce in any condition. According to the Professional Coin Grading Service (PCGS), only 187 specimens of the AMERI. cent are believed to have survived across all grades, while about 1,000 of the AMERICA cents are still in existence. It is believed that less than 500 examples of the 1793 Liberty Cap cent survive.

There are approximately 1,100 half cents carrying the 1793 date still around, and—as with their larger, one-cent counterparts— they are difficult to find. Only a handful of uncirculated examples remain of the 1793 half cent or any of the 1793 cent types, with nearly all survivors of either denomination existing in Brown circulated grades.

Survivors typically have surface problems, and many exhibit weak strikes. This makes finding “pristine” examples of 1793 half cents and large cents a challenging task, even for the most patient of collectors. Yancey, who has been an early American copper enthusiast for much of his life and coin dealer since 1996, concedes the goal of finding just the “right” examples is nearly elusive. “My personal coin collecting goal is a 1793 mint set, which consists of the three large varieties plus the 1793 half cent. I have been working on this for decades and my requirements are choice tan, low-grade coins with no defects,” he says. “In 22 years of looking, I have only put back two coins that met my requirements.”

Color and surface quality are major factors with early coppers, as Beymer agrees. “The buyer should buy the smoothest, light-brown coin that is affordable. Avoid black, porous surfaces if possible, and buy the most aesthetically pleasing coin you can find.”

Aesthetic factors for early coppers are measured not just by color or surface characteristics, but also strike. “Strike is always a big consideration,” says Yancey, who notes split grades are especially common with unevenly struck AMERI. Chain cents. “You might find one with a full reverse and every letter strong including the period, but flip it over and find there is no date.” He says Wreath cents are rather evenly struck, but Liberty Caps contain more strike variations. Meanwhile, 1793 half cents have generally even strike characteristics, “like the Wreath cent,” Yancey adds. “The date is one of the relatively stronger features on the 1793 half cents, so it’s possible to find even low-grade examples with a readable date.”

According to the Collectors Price Guide (CPG), levels vary from about $6,250 to $10,000 for problem-free Good-4 Chain cents, with values tending toward the higher end for the AMERI. variety. Wreath cents grading Good-4 are generally priced in the $3,300 to $3,600 range, while a Good-4 example of the 1793 Liberty Cap sets collectors back by around $5,000 to $6,000. The CPG lists 1793 half cents at approximately $4,100, with variables in pricing based on color and strike, as is the case with the large cents. Porous or cleaned specimens of the 1793 half cent or any 1793 large cent grading lower than Good-4 and exhibiting uneven color sometimes trade for as little as $1,000 to $2,000. On the other end of the grading spectrum, pristine uncirculated examples of either 1793 copper denomination approaches—and usually enters—six-figure territory.

“Any 1793 [coin] will be a considerable investment, so educate yourself to find out what you like and what is available,” Yancey reminds buyers. “Also, find a dealer that is knowledgeable and, more importantly, trustworthy. A lot of these early coppers trade privately between dealers and collectors, so without building some valuable relationships you will really be limited to the amount of coins you have to choose from,” he adds.

“Finally, remember everybody has different preferences. Only buy the coins that you like.”