CDN had the pleasure of attending last month’s FUN convention in Florida, and some of the most enlightening conversations we had revolved around the Greensheet. Specifically, we received valuable feedback about our new layout. Now that the new and improved, full-color issues have been “in the field” for multiple months, dealers we able to express the pros and cons of the changes. As always, we welcomed such feedback and it weighs heavily on our decision-making process each month. We came away with three primary aspects of the sheet to try to improve: the finish of the paper; the width of the font; and the labels in the various price charts. We have begun to address all three starting with this issue.

When we went to the full-color format, we moved away from the low-quality photocopy paper previously used and to a heavier, glossy stock. While the feel of page was pleasant, it was pointed out that looking at a glossy page is subject to a glare. Testing this under the bright lights of the bourse floor, we instantly agreed. We procured samples of different paper stock upon returning home and we have gone to paper of the same weight and opacity but with a more matte finish. Hopefully this takes care of any glare when looking up pricing. Next was the font. While the font is the same height—actually nominally taller—it was narrower than previously, thus appearing smaller. We have tried to make the font wider, working within the limited space we have on the page.

The labels that describe each note have been updated as well. For most series, the order is now: year or series, followed by the denomination, followed by the Friedberg number in parenthesis. Short abbreviations or descriptors have also been added to the more well-known types in order to quickly identify them. Two series that retained their prior labels are Federal Reserve Notes, both Large Size and Small Size. The Large Size are the most problematic. There are five elements to try to fit: series, denomination, seal color, Federal Reserve district, and Friedberg number. Right now, we only indicate the Red Seals explicitly, because there are fewer of them and they are much scarcer than their Blue Seal counterparts. The district of course is critical, as is the Friedberg number so that the correct signature variety can be identified. The series is not very important, since all but the $500 and $1,000 notes are 1914. Small Size FRNs are less problematic because there are only five Friedberg numbers and they are all 1929. See more on Federal Reserve Notes below. The only other group we retained the prior labels for are Fractional Currency, since of course they do not have a year and are already divided by emission. We will, however, be adding descriptors to differentiate between notes of the same denomination (see First Issue). In the end, we want to hear from you, the users of the Greensheet. Our goal is to be responsive as possible, to make your business more efficient.

With a grand total of just under $10 million—$9.925 million to be exact—the Heritage FUN auction, as always, provides a tremendous amount of data to digest and report. While the updates will continue into next month, there is price movement in Large Size Legal Tenders, Gold Certificates, Federal Reserve Notes, and Small Size Legal Tenders, Silver Certificates, World War 2 Notes, and Military Payment Certificates, among others. While one auction can never define the currency market fully, it is a helpful compass to its current direction. While the total can be considered solid and many individual notes performed very admirably, there were still soft spots. 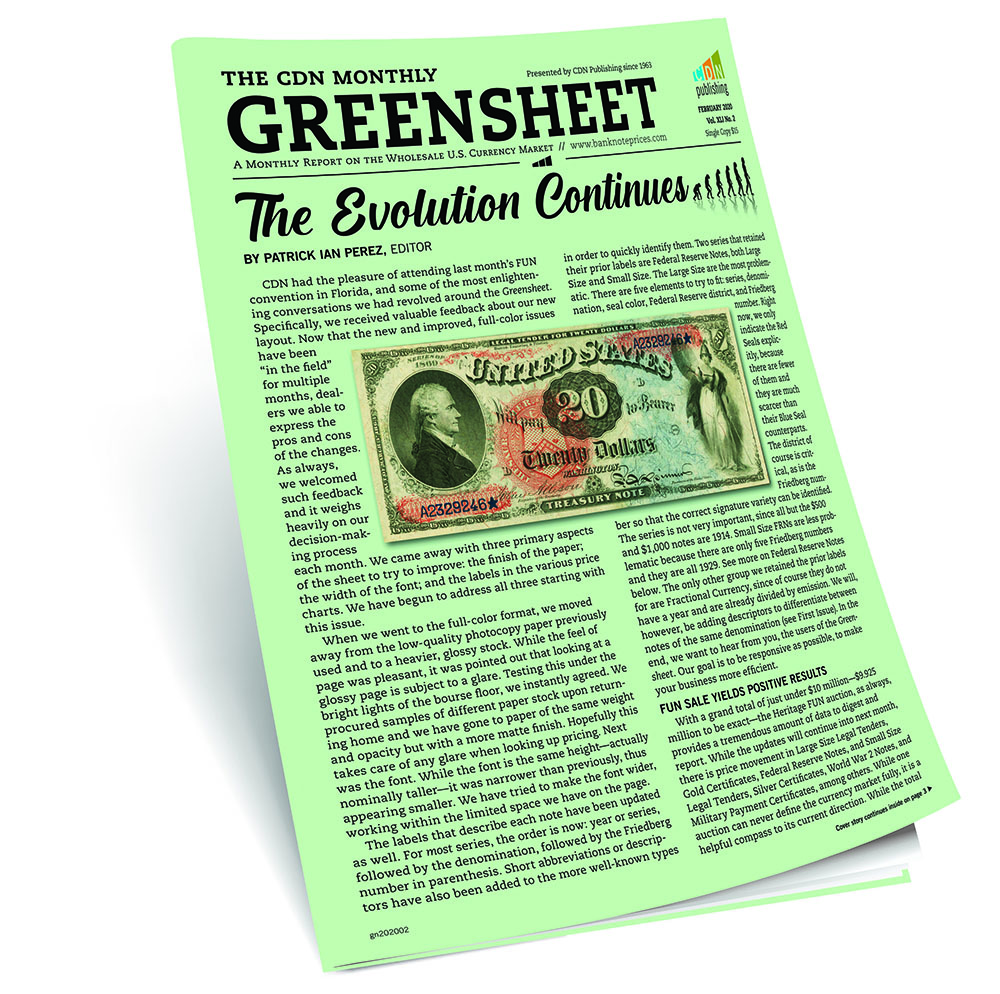 This article and valuable pricing information is included in the February 2020 Greensheet.  Consider a subscription today.

In this issue we have also forged ahead with the thorough review of Large Size FRNs. Added are prices for the “B” varieties of the $5 Red Seals, which has already been done with the $50 denomination. Secondly, all of the $5 Blue Seals have been reviewed in high grade, as generally it is only in the high Uncirculated grades that these notes begin to differentiate themselves in price. This has never been properly displayed by a U.S. currency price guide. As we have stated in the past, we will display a “~~~” when a note does not exist in that grade, or there is zero trade data if one might exist. Multiple people have asked why it is necessary to list every note in this series individually; this is the answer. While many notes share the same price in Very Good through Extra Fine, the diverge as the grading scale goes up. For example, we list 48 $5 Blue Seals, but only 10 of those exist in CU67. When this pricing project is complete, it will be accurate by grade and be the only regularly-updated price guide for this series.

Subscribe to February 2020 edition of Greensheet for the industry's most respected pricing and to read more articles just like this.