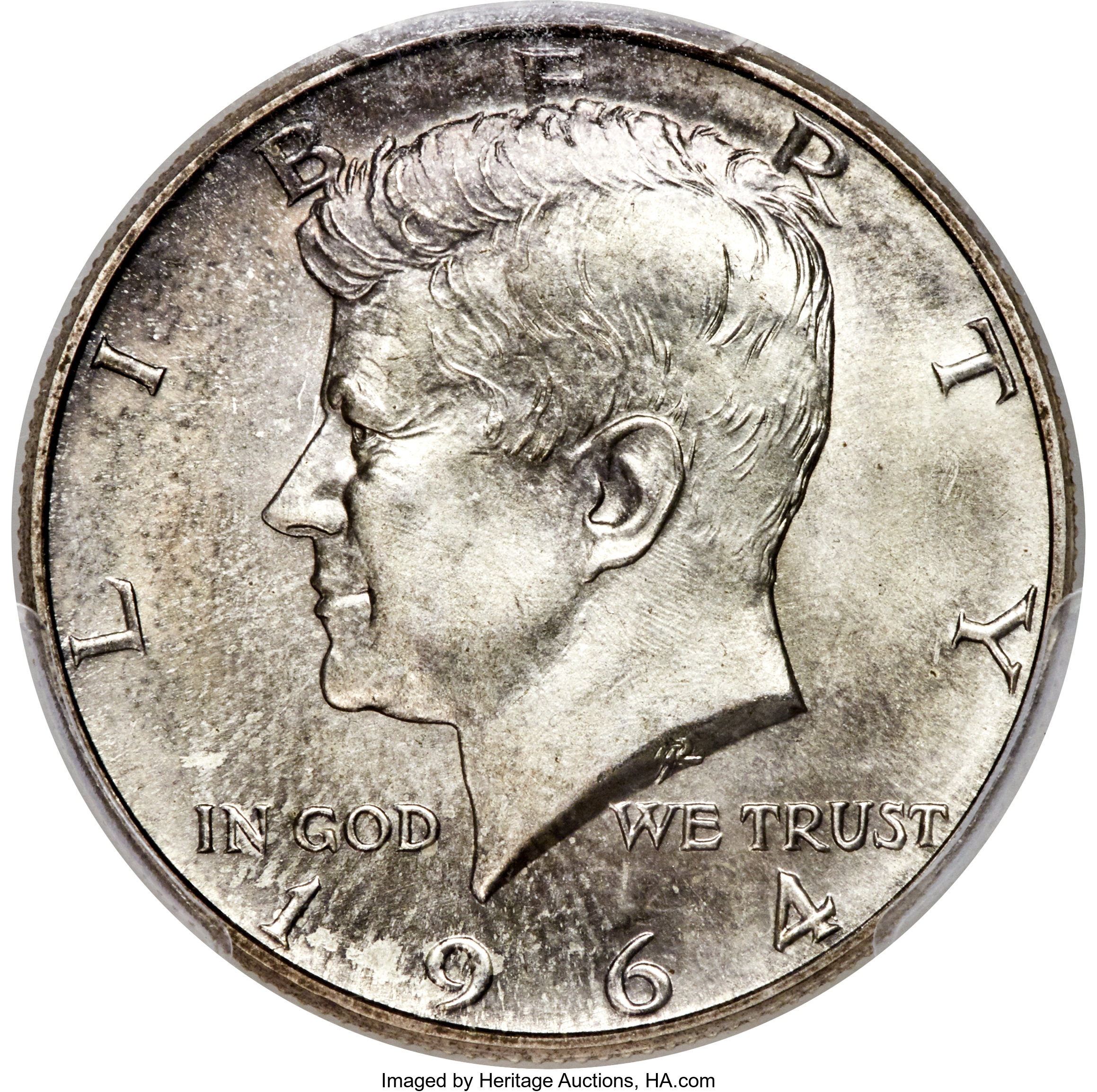 A 1964 Kennedy Half Dollar sold for a world record $108,000, making it the most expensive coin of its type, during a public auction of rare U.S. coins held Thursday, April 25, 2019, by Heritage Auctions. The rare example of the rather common piece of pocket change is one of about a dozen special issues struck in 90 percent silver and 10 percent copper for special coin sets issued by the U.S. Mint during the mid-1960s.

The sale smashed the $47,000 previous world record price, set by Heritage Auctions in 2016. Both the seller and the winning bidder wish to remain anonymous at this time. Heritage Auctions presented the coin at an auction during the Central States Numismatic Society (CSNS) Convention just outside of Chicago in Schaumburg, Illinois.

“This the king of Kennedy half dollars,” said Todd Imhof, vice president at Heritage Auctions, the world’s largest auctioneer of coins and paper money. “It seems we were very successful in attracting all the right bidders to this modern rarity and collectors did not want to miss the opportunity to own one of the United States’ rarest Kennedy half dollars.”

Special mint set coins are characterized by a better-than-average strike, the result of higher-tonnage coin presses than those used for coins intended for general circulation. The example sold at auction on Thursday is valued for its rarity as well as its unique, satiny surface condition.

In the April edition of Monthly Greysheet we feature a comprehensive analysis of Kennedy half dollars, a series we’ve seen heating up for a while now. This being the 55th anniversary year helps the series a bit. But so, too, does the movement toward more people collecting modern coinage and appreciating the value of scarce and high-end examples from later-vintage series such as the Kennedy half dollar, which features a wide variety of interesting material and ample collecting challenges even for the most affluent collectors. The sale of this six-figure 1964 SMS Kennedy half dollar only further demonstrates that point.

I just found that I have 8 of these exact coins in exceptional condition, they were never in circulation. I plan on contacting this auction house to get information. I also have more coins, a lot of Eisenhower dollars too that I have not had a chance to look at and research. I registered and have an account with Greysheets. Any information you can provide would be appreciated.

WOW ... at this point, i would rather be the seller .. maybe i'll go out and buy a lottery ticket?! Don't think i am hiding one of these in my little collection...but if i do find one, Heritage will be my auction house of choice!

I have a 1964 half dollar with errors. It was in my moms inheritance. She passed it down to me a couple of years ago.

ANY PERSON that is in possession of the 1964 SMS Half Dollar can contact the auction house that the articles refers to. I go to coin collectors conventions in my nearest big city to meet other enthusiasts and gather valuable information as well. I wouldn't share any personal information online or on the phone with anyone you do not know personally. There are many scam artists and people that will do harm to you and rob you of your collection or a specific coin if it's quite valuable. Please be careful when sharing coin information with others. Always call or visit a well known auction house to get information on a good trustworthy appraiser and take your coin(s) in person. Never mail your coins to anyone and never keep them in your home, a safety deposit box for your coins/valuables is worth paying for. I have a concealed weapons license, a locking briefcase and never go alone. My family knows when and where I'm going and when to expect me back when I do go to appraisers and conventions, etc. Be very aware and safe, always. Hope this helps!

I have the same coin, I am sure it is original, I have it since 1964 with all the descriped deccneds. How can I sell it ?

I have 1964 half dollar Kennedy coin please let me know what is the price heard recently sold for $108K and how to sell the coin.

Where do you go to have your 1964 coin appraised if you have one?

What is the weight of this variety verses a regular 1964 Kennedy? Are there any other telltale signs such as the edges?

Can you be more specific about what exactly is so special about this? I am a bit confused because I thought SMSs were only sold in 1965/66/67, and weren't really all that popular hence the return to proof sets in 1968. Why were there only half a dozen struck? Would these be considered patterns or were they the work of a rogue mint employee? And I suppose the elephant in the room is, if there are 1964 SMS halves, are there quarters, dimes, nickels, cents? Sometimes the history is just as interesting as a picture!

buyer has more money than sense