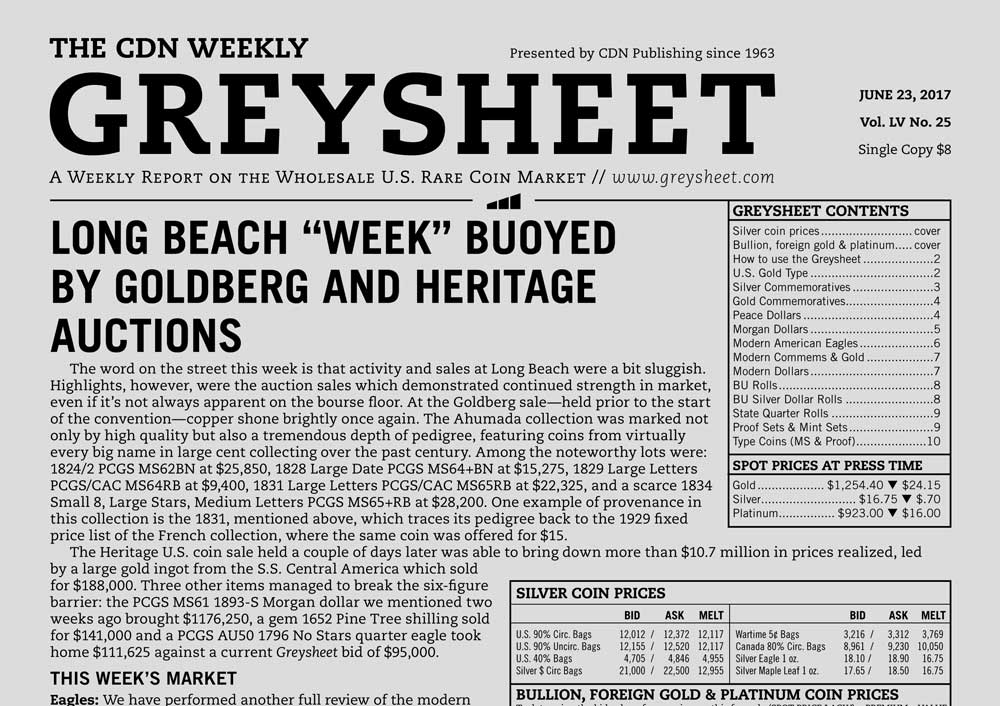 
The word on the street this week is that activity and sales at Long Beach were a bit sluggish. Highlights, however, were the auction sales which demonstrated continued

The word on the street this week is that activity and sales at Long Beach were a bit sluggish. Highlights, however, were the auction sales which demonstrated continued strength in market, even if it’s not always apparent on the bourse floor. At the Goldberg sale—held prior to the start of the convention—copper shone brightly once again. The Ahumada collection was marked not only by high quality but also a tremendous depth of pedigree, featuring coins from virtually every big name in large cent collecting over the past century. Among the noteworthy lots were: 1824/2 PCGS MS62BN at $25,850, 1828 Large Date PCGS MS64+BN at $15,275, 1829 Large Letters PCGS/CAC MS64RB at $9,400, 1831 Large Letters PCGS/CAC MS65RB at $22,325, and a scarce 1834 Small 8, Large Stars, Medium Letters PCGS MS65+RB at $28,200. One example of provenance in this collection is the 1831, mentioned above, which traces its pedigree back to the 1929 fixed price list of the French collection, where the same coin was offered for $15.

We have performed another full review of the modern bullion prices found on page 6. Both mint state and proof gold American eagles have continued the recent trend of lower premiums over gold spot. The very popular one-tenth ounce gold eagle has been bid around 10% to 11% over spot over the past several years and is now available for 7.5% over spot. Somewhat unprecedented is the fact that proof gold eagles, specifically the one-tenth and one-fourth size coins are now bid for less than their business strike counterparts. Readers should be aware of this development especially when buying proof gold wholesale. The benchmark mint state one ounce gold eagle can also be found for as little as 2% over melt. On the positive side, proof silver eagles are seeing renewed demand, and after falling all the way down to $35 they have come back to be bid at $40.50 this week. The better date mint state half ounce gold eagles are also outperforming the market, with the key 1991 bid up to $2,700 this week.