Professional Coin Grading Service (www.PCGS.com) was selected by Sotheby’s in New York to officially certify and grade the 1933 Saint-Gaudens Double Eagle, a gold coin once owned by King Farouk of Egypt that will soon be offered for sale. 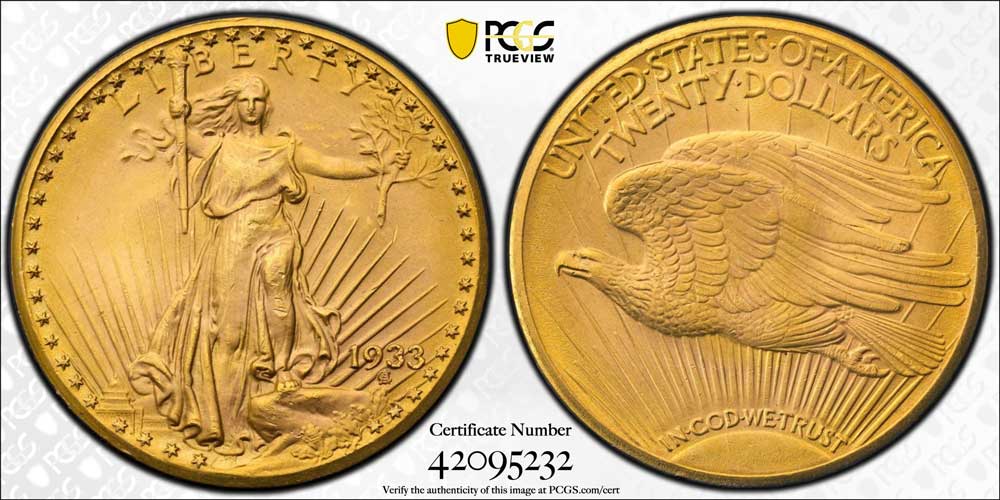 Professional Coin Grading Service Graded the Only Legally Obtainable 1933 Saint-Gaudens Double Eagle as MS65, to be Sold by Sotheby’s in June 2021.

Professional Coin Grading Service Graded the Only Legally Obtainable 1933 Saint-Gaudens Double Eagle as MS65, to be Sold by Sotheby’s in June 2021.

(Santa Ana, California – April 8, 2021) – Professional Coin Grading Service (www.PCGS.com) was selected by Sotheby’s in New York to officially certify and grade the 1933 Saint-Gaudens Double Eagle, a gold coin once owned by King Farouk of Egypt that will soon be offered for sale. PCGS has graded the gold coin MS65 and its current owner, shoe designer Stuart Weitzman, is offering it along with a handful of other exceptional rarities at a Sotheby’s auction to be held in New York on June 8, 2021.

“We are excited and proud to be given the opportunity to formally certify the 1933 Saint-Gaudens Double Eagle," says PCGS President Brett Charville. “This coin is a true gem! Breaking the world record in 2002 for being the most valuable coin ever sold, this specimen has a story unlike any other United States rarity.”

The first delivery of 1933 Double Eagles to the Philadelphia Mint cashier was made about 10 days after President Franklin Delano Roosevelt was inaugurated. In one of his first acts, Roosevelt declared an effective end to the nation’s adherence to the gold standard, banned the payout of gold coins, and began the recall of all U.S. gold coins, which were eventually melted.

According to the Mint’s records the entire mintage of 445,500 double eagles struck in 1933 was accounted for, and all were to be melted except for two sent to the Smithsonian. In 1937, a number appeared for sale privately; in 1944 a Secret Service investigation determined that they had been stolen from the Mint and were seized from their owners.

One was purchased by King Farouk. It became part of his fabulous collection and was beyond their reach. Sociopolitical turmoil led to King Farouk’s fall; he was exiled, and the new government dispersed his collection of coins through Sotheby’s. The 1933 Double Eagle was withdrawn from the auction and its whereabouts were unknown for decades until British coin dealer Stephon Fenton surrendered the coin to United States authorities in 1996.

The coin hung in legal limbo for several years, leaving the rarity to be stored in a Secret Service vault at the World Trade Center in New York City. Just before the terrorist attacks destroyed the World Trade Center in 2001, the legal status of the 1933 Saint-Gaudens Double Eagle specimen hailing from King Farouk was resolved and the coin was subsequently removed from the ill-fated New York City landmark. The coin was offered for sale by Sotheby’s/Stack’s in 2002, taking a world-record $7.59 million.

Nearly two decades later, the specimen remains the only legally obtainable example of the 1933 Saint-Gaudens Double Eagle, with two specimens held at the Smithsonian Institution and all known others currently in custody of the United States government, which confiscated a handful of other specimens that came to light in recent years. The unique specimen being offered by Sotheby’s is expected to take between $10 million and $15 million.

Due to the unique circumstances and rarity of the 1933 Saint-Gaudens Double Eagle, PCGS is taking the unusual step of, at the auctioneer’s request, grading and certifying, but not holdering this rarity in PCGS’ tamper-evident holder. The winning bidder of the coin may submit it to PCGS for holdering to provide state-of-the-art security at no additional charge.

Previously, PCGS has only reserved non-holder certification to just one other rarity, which is the Walton specimen of the 1913 Liberty Nickel graded PCGS PR63. Those interested in examining a high-resolution image of the unique PCGS MS65 1933 Saint-Gaudens Double Eagle can view it via PCGS Cert Verification ( www.PCGS.com/Cert/42095232 ).

Professional Coin Grading Service (PCGS) is a third-party coin and banknote grading company that was founded in 1986. Over 35 years, PCGS has examined and certified more than 45 million U.S. and world coins, medals, and tokens with a combined value of over $41.7 billion. For more information about PCGS products and services, including how to submit your coins for authentication and grading, please visit www.PCGS.com or call PCGS Customer Service at (800) 447-8848.